#StopArmingSaudi: actions and legal proceedings in the UK 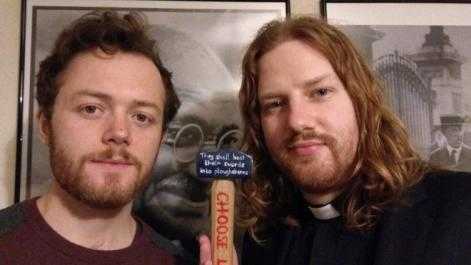 In the early morning of 29th January, two activists were arrested inside a BAE Systems factory in the north of England. Sam Walton and Daniel Woodhouse had entered the site with the intention of disarming war planes destined for Saudi Arabia. Similar planes have been used by the Saudi military in their military campaign in Yemen, http://uk.reuters.com/article/uk-yemen-security-un-idUKKBN15D0S9?il=0 They were stopped and arrested just meters from one of the planes. They were released from the police station on bail, and neither have yet been charged with any crime.

Following their release from the police station, the pair said:

“BAE security found us just metres from war planes bound for Saudi Arabia. We’re gutted that we couldn’t disarm a plane and stop it being used to carry out airstrikes in Yemen. We could have saved lives by preventing Saudi war crimes in Yemen.

The UK government has blood on its hands and we need to do everything we can to stop the transfer of weapons and show these sales are illegitimate. By providing weapons and support Britain is deeply complicit in Saudi war-crimes, and it’s vital that we bring an end to this immoral, abhorrent trade.”

Their action came just days before legal action against the UK government, brought by Campaign Against the Arms Trade, began. CAAT is challenging the UK government's decision to continue to licence the export of military equipment to Saudi Arabia. Some of the hearing was in public, while parts were closed to the press and the public.

Export licence applications are considered against the Consolidated EU and National Arms Export Licensing Criteria. While the decision is ultimately made by the International Trade Secretary, both the Foreign and Defence Secretaries provide advice. CAAT's case focuses on Criterion 2c, which says that licences should not be granted if there is a clear risk the equipment might be used in a serious violation of international humanitarian law.

Judgment is expected four to six weeks after a hearing, but could be sooner or later. You can find more information, including the legal documents submitted before and during the hearing, on the CAAT website here: https://www.caat.org.uk/resources/countries/saudi-arabia/legal-2016