Now more than ever: supporting conscientious objectors to military service

This article was first published in May in Friedensforum / Peace Forum

After two years in prison (during the First World War, he was in prison as a conscientious objector), Herbert Runham Brown sat thinking about antimilitarist solidarity: "Even in that prison we had broken through the walls. The iron bars no longer stopped all our communications; a grip of the hand was sometimes felt, and a comrade's voice was often heard. Slowly but persistently we had broken every rule and crumpled up every bar that stood between friend and friend ... And so I fell asleep to dream of the International of those who would refuse all war service, not to keep themselves unsoiled from the blood of their brother, but so that they might render the greatest of all service, that they might be his comrade and rekindle his faith in men".

Brown was a builder and campaigner against the British war against two South African states at the turn of the 20th Century (he made his first public speech at the age of 20, denouncing British concentration camps in South Africa). He went on to to be one of the founders of War Resisters’ International (WRI, then called ‘Paco’), in 1921.

I feel his words rattling down the decades, and am motivated by them to support conscientious objectors today.

International solidarity is important for so many reasons. Firstly, being a conscientious objector (CO) can be unpopular, lonely, and difficult to maintain. This is true in different ways, but especially for those who face imprisonment - sometimes repeatedly, like Atalia Ben-Abba, who by the time you read this will possibly be imprisoned for the fifth time in an Israeli women’s jail - and for those forced to refuse in the face of immediate threat, like Diego Blanco, currently detained in a military base in Antioquia, Colombia. Diego has been detained for over five months, and in that time has been assaulted and threatened. For individuals and movements working in militarised contexts such as these, the moral support of like-minded people is invaluable, and we are told this repeatedly by people who have been sent a letter, and received a communication, whilst in prison. You can also use our CO-Alert system to voice your opposition to the authorities (see our website wri-irg.org).

Secondly, nonviolent, antimilitarist organising is inherently international. Nationalism and racism are part of the basis of militarism - allowing an ‘other’ (internally or externally to the State) easily to be turned into an ‘enemy’. By working internationally, we are acting now as we believe the world should be organised.

Thirdly - and one of the reasons WRI exists - is to learn from one another and share ideas and inspiration.

Finally, I would argue that international solidarity is particularly important now. When I first started working for WRI, some five years ago, people were talking of a trend away from conscription. In the last twenty years, many countries in Western Europe, and a handful in many other regions, have abolished or suspended conscription, in favour of ‘professional’ armies, made up of volunteer soldiers. This does not imply a curtailment of militarism necessarily - it is still in the interests of armies, governments and arms companies to culturally conscript populations, and especially young people, in order to attract volunteers - but does generally reduce the immediate power of militarisation over the liberty of young people.

These changes also demonstrate the outdated nature of the quote above: Brown only refers to male conscientious objectors. Not only do women now serve in conscripted armies in many countries, but women are also the target of military advertising in many countries. They are also - as in the First World War, and throughout many periods since - conscripted culturally and emotionally to support the war effort. 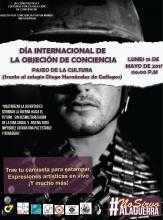 One of the ways we support resistance to the draft is by drawing attention to CO movements, and giving activists around the world information so that they can take action in solidarity with them. I’m writing this on 16th May, the day after International Conscientious Objection Day, which is an annual event in which we do this. It was wonderful to open my inbox to news of all the events happening around the world yesterday. There was a range of creative events!

In Colombia there were street actions in Barrancabermeja and a webinar educating people on militarisation in the country, and the impacts of the peace process (a recording of this will be available soon on the WRI website). In Finland, COs took action in solidarity at the Israeli embassy with refusers in Israel (see photo). The CO Association in Turkey held a press conference during the ongoing state of emergency, where three more people declared their conscientious objection. Others in Istanbul held a ‘Vegan sandwiches and Antimilitarism’ forum.

In South Korea, around 100 people ‘pedalled for peace’ around Seoul, and in Germany a street on an old army base was renamed for the Iraq refuser André Shepherd. The UK and USA saw a number of vigils, peace choirs and info stalls giving people the chance to show solidarity with CO around the world.

It’s a day when we celebrate refusal, disobedience, and everything that says no to militarism. But also a day when we say yes to nonviolence, solidarity, and reclaiming our bodies and communities for coexistence! Please think about how you can support COs, and visit our website for ideas: wri-irg.org. Who knows, this might include holding an event on 15th May next year!