They are groups and individuals who take decisions by consensus, and who agree that resistance to militarism must be civil. As such, resistance must not promote any kind of military court activity.

RAMALC promotes nonviolent acts of resistance, based on the assumption that resistance cannot use the same military methods which restrict the right to live in peace. Additionally, since antimilitarism should be an active and participatory exercise, direct actions are part of RAMALC’s activities.

The Network was formed as such in 2014, but the truth is that it was already formed long before that. It simply had no name.

They had already carried out some actions, seminars and meetings.

In 2004 in Santiago de Chile, a seminar was organised called Nonviolent Resistance to the Dictatorship as well as training in nonviolent direct action.

In 2010 in Asuncion, Paraguay, the Transantimili was held, linking trans and anti-militarist themes, as well as nonviolent direct action training session.

In 2014 in Quito, Ecuador, a training for trainers in direct action took place and the network was formalised. It was defined as a liaison promoting antimilitarism in society through meetings and nonviolent training, questioning the military structure and domination practices.

This year we will meet again in Asuncion, Paraguay against the militarization of bodies and territories.

More information can be found here.

With respect to other activities, we have run two webinars, the first of which included the militarisation of the peace process in Columbia. 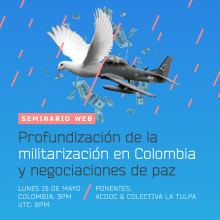 and the second was about current conflicts in Venezuela.

We have also carried out various training sessions on nonviolent direct action in different countries in Latin America. 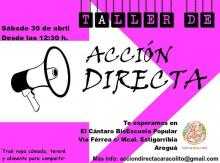 And a magazine called Rompiendo Filas. The first edition was published in print an digitally: http://ramalc.org/revista-rompiendo-filas/ and the second one will be launched during the meeting in Paraguay. 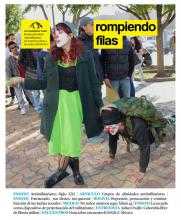