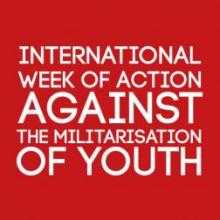 This week is the International Week of Action Against the Militarisation of Youth (14-20 November). There are many actions and events, organised by groups from different countries, happening this week. Please see the list below.

The week is a concerted effort of antimilitarist actions across the world to raise awareness of, and challenge, the ways young people are militarised, and to give voice to alternatives.

If you cannot attend any of these events, join us this week via posting from your country on social media using the hashtag #YouthAgainstWar and/or #everydaymilitarism.

Your posts can include any articles, reports, stories, or visuals such as photos or videos informing us about the militarisation of youth, and/or resistance to it, via examples from your country/region. You can also post photos from your town or city showing us examples of everyday militarism in your context (such as military ads, or military parades etc).

If you'd like to involved in any other way (organising an event or publishing etc), you can always contact us via cmoy@wri-irg.org.

- 14th November: National Network Opposing the Militarization of Youth from the USA launches the campaign Winning the Peace, which will be an ongoing and multiyear intervention against U.S. military's intrusion into the public school system for the purposes of supporting its wars.

- 14th - 18th  November: Aseistakieltäytyjäliitto AKL from Finland will organise a number of actions and circulate anti-recruitment resources in front of the military recruitment offices in Helsinki.

- 14th - 20th  November: Auckland Peace Action from New Zealand organises a “Week of Peace” with a number of events including a direct action against the arms expo in Auckland.

- 16th November: NESEHNUTÍ from the Czech Republic organises a public workshop in Brno on arms trade and its links to the militarisation in Europe. Throughout the week, NESEHNUTÍ will also promote a new documentary on the militarisation in Czech society, in which they took part in. You can find more information about the film here.

- 16th November: Women in Black (London) leads a vigil on youth militarisation, handing out leaflets to members of the public in central London.

- 16th – 20th November: Activists from Israel will declare conscientious objection. The declarations will be followed by a number of support actions organised by Mesarvot, a network of Israeli organizations, groups and individuals who support political conscientious objectors.

- 17th November: Granny Peace Brigade from New York (USA) will organise an action across 12 high schools throughout New York City's 5 boroughs. As part of the action, activists will provide parents with information concerning non-military options for students after high school as well as points to consider when military recruiters call or meet with youth. Granny Peace Brigade is an initiative by a group of women in New York, running a number of activities addressing the militarisation of youth in high schools. Their other campaigns include eliminating the funding for the Junior Reserve Officers Training Corps program in 18 NYC high schools, and protecting students' privacy rights against the military recruiting services in high schools across the country.

- 17th November: ACOOC – Colombian Collective Action of Conscientious Objectors will organise a workshop on nonviolent social protest and alternatives to militarisation at the Pontifical Xavierian University in Bogota. As part the workshop ACOOC activists will introduce a role-playing game, Compa, which simulates situations of social protest and resistance to police violence.

- 17th November: DFG-VK activists in Bargteheide (Holstein, Germany) will circulate leaflets in front of a job fair taking place in a school where the Federal Army will be running a recruitment stall (7.30 h, Am Schulzentrem, entrance of Anne-Frank-Schule)

- 18th November: DFG-VK activists in Erlangen, Germany will circulate leaflets in front of a school on the occasion of a Federal Army "career guidance" event.

- 18th November: DFG-VK activists in Frankfurt/M, Germany will circulate leaflets at the job fair "Azubi & Studientage" in Frankfurt where the Federal Army officers will be running a recruitment stall.

- 18th - 27th November: Foundation for Active Nonviolence (Stichting voor Actieve Geweldloosheid - SVAG) from the Netherlands will organise a non-violence training, Towards a Nonviolent World, where WRI activists will also present a session on nonviolence and countering the militarisation of youth.

- 19th – 20th November: CUERPO CON-SIENTE from Colombia will organise a public workshop in Bogota on alternative approaches to social transformation.

- 23rd - 25th November: MOMO from South Korea will organise a public seminar in Seoul on peace education and countering the militarisation in South Korea.

Throughout the week, Centre Delas, together with Desmilitaritzem l’Educació, will send letters to education events organisers in Catalonia who invited the army to, or allowed a military presence in, their events. They will also organise a meeting with political parties within the Catalonian Parliament, which has issued a resolution urging the government to limit military presence at public spaces, including schools, and to avoid promoting the military industry in Catalonia.

Alongside the events, the week of action will also include a number of articles to be published on antimili-youth.net. The pieces will include cases from the UK, Germany and Mexico.

Dr. Victoria Basham, senior lecturer in International Relations at the University of Cardiff, will write on the militarisation of youth in the UK with a specific focus on the UK Government and the military programmes mainstreaming the idea of “military ethos” at schools.

David Scheuing, WRI activist and a graduate student of Peace and Conflict Studies at the University of Marburg, will write for antimili-youth.net on the advertising strategies of the Bundeswehr (the German Military) targeting young people in Germany.

London Mexico Solidarity, a group of activists based in London and Mexico, will write on the militarisation of war on drugs and the ways it affects the lives of young people with a specific focus on the Ayotzinapa attacks that took place two years ago.

The articles will soon be available on antimili-youth.net, where you can also follow other updates from the week of action.