We need them: campaign against femicide in Cali

"We need them Because they were willing to love, they dressed up, all they wanted was to be happy as in fairy tales and they were unaware that many times they end like horror stories. Because they loved their neighbour - a neighbour - more than themselves. They obeyed the mandate to endure, to hope for love to change him, they abided solemnly "until death do us part". 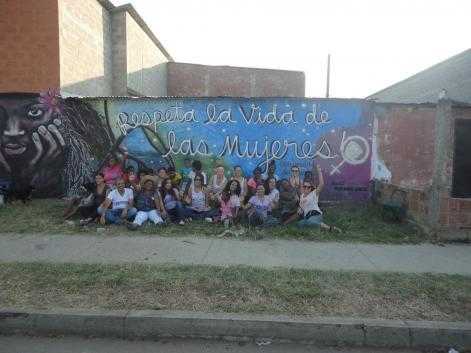 The Valle del Cauca Department is located in south west Colombia. 10% of the nation's population is concentrated there, and it features a great cultural, ethnic and social diversity. It's also the destination area for displaced people fleeing from armed conflict mainly in Cauca, Narino, Putumayo and Choco departments.

Despite being one of the most cordial territories in the country, the Cauca Valley headed the list of departments with most cases of women murdered in 20151. This situation has become particularly acute because up to September of this year in the city of Cali (El País, 2016), capital of Cauca Valley, 73 women were reported murdered, 22% of the cases being alleged femicides and 63% of them in process of clarification.

The media daily reflects the consolidation of a patriarchal culture that naturalises, justifies and makes violence against women invisible. This is at the detriment to loving relationships, the enjoyment of sexuality and human dignity. Life is no longer sacred, and according to the anthropologist Rita Segato, a "pedagogy of cruelty" has been installed, which desensitises large sectors of society, including institutions, and normalises violence as if it were inevitable.

One of the principal indicators of this pedagogy of cruelty is gender-based violence and its most extreme form: femicides, extended as murders of persons for being women in the hands of their male partners, ex-partner of the victim or strangers "motivated by hate, disrespect, pleasure or belief that women are of their own property, that is to say, alluding to sexist motivations" (Lagarde, 1994).

In Latin America, the contribution of anthropologist Marcela Lagarde is worth highlighting. She is a Mexican feminist writing from a critical perspective, who introduces an analysis that intercepts the concept of feminicide with gender, economic and racial unfairness within a local context – in this case the City of Juarez, Mexico. "That new meaning includes it's consideration as a State crime, generated by the absence of state programs to guarantee a life without violence for women" (Monarrez, 2009).

In the Department of Cauca Valley, entities such as the Cali Municipality through their Social Observatory (SO), or the Regional Valley National Institute of Legal Medicine and Forensic Sciences (NILMFS) do not possess either the institutional technical guidelines for the classification of feminicide cases, nor the specialised staff (qualified experts) in gender issues.

A reflection of this, as the SO, is that up until last year some feminicides were erroneously classified as crimes of passion, reducing the cultural implications and power relationships which "render a special role to the use of masculine strength in hierarchical gender relationships" (Jimeno 2002) and involve the perpetration of women's murders.

In addition to the previous scenario, other cases in which a relationship or bond between women and their aggressors does not exist are still considered homicides, disregarding - among other cases - crimes against women that are misogynist murders, those that are committed for the sake of honour, those that occur in armed conflict, others that are related to gender identity and sexual orientation, infanticide and foeticide, and those related to ethnicity and indigenous identity.

Likewise, there is no information available about passive or indirect feminicides, among which the death of women due to clandestine and unsafe abortions are found, cases caused by practices such as genital mutilation, dealing and trafficking of women, arms trafficking, drugs, gangs' activities, criminal mobs; death of girls due to negligence, nutritional deprivation or abuse, acts of neglect from public or State official, among others. (Latin American protocol of investigation in feminicides 2014).

Faced with this reality, the group Colectiva Reparando Ausencias (Repairing Absences group) emerges as a civic engagement movement that seeks to address social imaginaries which justify, naturalise and make invisible all violence based on gender in the private, public or institutional sphere. We are convinced that removing these beliefs and atavistic practices through education, communication and social mobilisation, it is possible to start a path towards the construction of respectful relationships between men and women, dignity and rights of women.

In the Reparing Absences group, we come together as women and men activists who claim women's right to a life free of violence. At present it is made up of family members of the victims of feminicides, people who participate in various social projects, politicians, academics and institutions of the city.

The group began in July 2015, and since then we have conducted several symbolic events, hands-on workshops and community gatherings to get the city involved with murals, stencils, performances and nonviolent direct actions and awareness-raising actions regarding the increase of violence against women in densely populated parts of the city.

In order to ensure a shared understanding, we construed the campaign "We need them", through which we have been expressing several forms of interaction and dialogue among the people, we conducted follow-ups of the feminicides that took place in the city of Cali and in the Department, we distributed and led gender-related violence eradication campaigns in local areas so as to raise awareness of an issue that hides inside homes, which is believed to be within the couple's private sphere, but which requires an integral approach as a society to achieve structural changes.

Our endeavour summons the people of Cali to establish dialogues, reflections and collective actions against indolence and the exertion of masculine and patriarchal power that destroys dignity, bodies and lives of hundreds of women each year in the department. Art in action, or 'artivism', is what inspires us and brings us together: that dimension of culture that combines social urgencies, symbols, contents and poetic, creative and artistic language towards social movement.

That is the reason that our first symbolic event named "Embroidering the absences of women victims of feminicides in Cali" held on 13 November 2015 in a public space crowded with people, had a strong artistic, symbolic and creative component.

The group called on 80 male citizens to carry out a custom that for ages has been embraced by women's hands, this time they seized drum, needle, thread and canvas to embroider with patience, concentration and respect the name of one of the women victims of feminicides in the city of Cali. Each man embroidered with his own hands the history of a feminine life, the face of one of the 80 women murdered and absent from the city, reminiscing for the audience a life project murdered by male violence. See video at https://www.youtube.com/watch?v=3OjXOI0q17I

The embroiderers were accompanied by a group of 25 women who handed out guidance leaflets with tips about how to activate care routes in cases of feminicides and shared the relevance of the symbolic event for the city. Likewise, adolescents and young people set up a change mandala that invited the attendees to transform violence into love relationships. 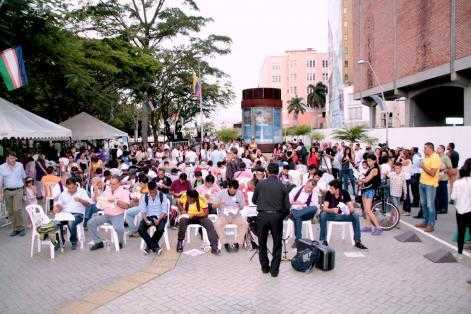 Following our symbolic event, the group has focused its 'artivism' on emblematic places of the city of Cali painting murals, stencils and t-shirts. Together with other groups and urban artists, walls were painted in Libertadores (13 December 2015), Siloe (21 December 2015), Potrero Grande (7 August 2016) and Jovita Students Park (10 September 2016) with messages alluding to the murders of women in the city and the vindication of women's rights to a life without violence.

Likewise, social based organizations together with women leaders, mothers, female heads of households and young neighbours of populated districts where major incidence of violence against women is evident, have organized workshops to discuss, reflect and take action regarding physical, emotional, psychological and social impacts that go along with violence experienced by impoverished women in Cali.

Other cases of political incidence in which we have participated, in articulation with Women's Social Movement in Cali, feminist organizations and LGTBI community were the commemoration act of international women's day at the Municipality of Cali building on the 8th of March 2016, to demand from the government the actual and effective implementation of a route of care to women victims of gender related violence, the protection of their lives and a restoration of their rights (Law 1257 from 2008 and Law 1761 from 2015 Rosa Elvira Cely), as well as the March for Raising Awareness of Sexual Diversity and the Pacific Region Gender (26 June 2016).

All these activities have allowed us to perceive several perspectives of how women cope with multiple violence in their daily life, their daily effort to overcome economic, cultural and social limitations, and more important, to be dear allies and partners in the political dispute to reassert their rights.

Without a doubt, as a group we have many challenges and changes to accomplish, for this reason we will continue mobilizing the people, denouncing injustices and promoting collective mournings to immortalize the names and histories of women victims of feminicides in Cauca Valley, singing as one "we need them".

MATURANA, Humberto and others. (1997). Violence in distinct areas of expression. Dolmen Ediciones. Chile.

LOPEZ, Mario (2003). Nonviolence, politics and ethics in The power of fragility: Experiences in the path to nonviolence. Editorial Kimpres Ltda. Pages 135-157.

1 El País, 2016a. In total, 671 women were murdered in 2015 and the areas with the highest number of cases were Cauca Valley (146), Bogotá (98), Antioquia (77) and Atlantico (30). See in http://www.elpais.com.co/elpais/judicial/noticias/continua-preocupacion-cali-por-casos-feminicidio