War Profiteer of the Month: RE/MAX

RE/MAX, one of the world’s largest real estate companies, is contributing to the Israel’s illegal settlement enterprise. Denver based RE/MAX International oversees more than 100,000 franchises in over 100 countries across the world, including Israel. RE/MAX Israel sells homes in all of the major settlements in the West Bank, including East Jerusalem and even has an office in the settlement of Ma’ale Adumim.

Settlements are entirely illegal under international law. In January 2016 Human Rights Watch released a groundbreaking report on how settlement businesses contribute to Israel’s occupation. The report, titled Occupation, Inc.: How Settlement Businesses Contribute to Israel’s Violations of Palestinian Rights, points out that settlement businesses depend on the theft of Palestinian land, pilfering of Palestinian resources, and discriminatory system of two sets of laws for two sets of people. The report directly indicts RE/MAX stating:

By advertising, selling and renting homes in settlements, both the Israeli franchise of RE/MAX and RE/MAX LLC, the owner of the global franchise network, facilitate and benefit from the transfer of Israeli civilians into occupied territory and the associated human rights abuses, contravening their rights responsibilities.

In 2014 CODEPINK began its remodel RE/MAX campaign to call on RE/MAX to stop profiting from and contributing to Israeli violations of international law and Palestinian human rights. Specifically the campaign asks RE/MAX to set standards for its franchises that they not sell, rent, or advertise properties on illegally seized land in the Occupied Palestinian Territories, including East Jerusalem. The campaign also asks RE/MAX to establish that members of the RE/MAX network should not refer clients to agents and brokers involved in such activities. 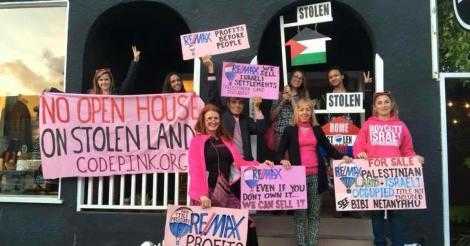 Since the launch of the campaign in 2014 demonstrations have been staged outside RE/MAX offices across the world. In 2015 and 2016 there were demonstrations and disruptions at the RE/MAX R4 annual convention in Las Vegas. In May 2016 Human Rights activists gathered outside RE/MAX’s annual shareholder meeting in Denver, CO. Dalit Baum of American Friends Service Committee and Ariel Gold of CODEPINK attended the meeting in the hopes of appealing to RE/MAX shareholders that settlement profiteering is bad for business. In anticipation of Baum and Gold attending the meeting RE/MAX put their headquarters on lockdown and assigned police escorts for Baum and Gold. In order to prevent them from being able to make a statement, RE/MAX canceled the question and answer portion of the meeting, shortening the meeting to only 11 minutes. In October 2016 activists protested outside the annual RE/MAX Europe convention in Rome, Italy. 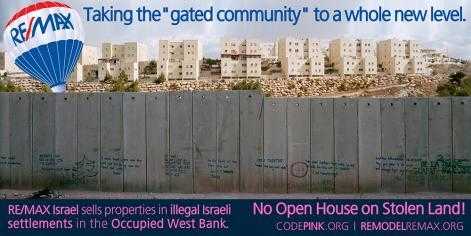 In June 2016 the Presbyterian General Assembly passed an overture calling on RE/MAX to stop profiting from settlement properties. Just prior to the general assembly, RE/MAX LLC CEO Dave Liniger released a statement that the company will stop receiving profits from the sales of settlement homes. However, Liniger did not specify what ceasing to receive settlement property revenue will look like in practical terms. RE/MAX Israel responded to the Presbyterian overture and Linigers statement by saying stating to the Israeli newspaper Haaretz that they will continue “business as usual,” the Presbyterian vote having “zero impact on what we are doing.”

Ariel Gold is the Palestine campaigner for CODEPINK