UK: Sisters Against the Arms Trade shut down missile factory

On 3rd May, a group of 15 women and non-binary gendered people took direct action against the MBDA missile factory in Bedfordshire, UK. Below is a personal account from one of the activists involved.

We stayed overnight at a friend’s house near the Bedfordshire factory; slumber party style. We got up first thing (4am!), ate a quick breakfast, and headed straight to the factory. By 5.45am we had chains and locks around both gates, and two people locked on. The factory was shut down! Nobody could get in to work.

The factory only had one entrance, which consisted of a wide gate for vehicles and a turnstile for people. We were organised: we coordinated our arrival and had the locks, chains, and arm tubes ready. Within seconds of arriving the two gates had locks around them and couldn’t be opened, and two people were locked into an arm tube in the way of the gates opening.

It was before 6am, so the factory staff hadn’t arrived yet. There was one member of security staff inside, who seemed a bit bemused, but all other staff were turned away as they arrived.

Cutting the locks off the gates would have required some pretty big bolt cutters, and the arm tube was heavy and couldn’t be moved without injuring people, so that was it; we occupied the space for the day. Factory closed! We held the space for the day with our bodies; singing, chanting and sharing stories.

The site is a missile factory owned by a company called MBDA, whose entire business is in missiles. They seem to sell them almost indiscriminately, only for profit. Their missiles are being used in UK air strikes in Syria, by Saudi Arabia  as they commit human rights abuses in Yemen, and were sold to all sides of the conflict in Libya, including to Gaddafi. So many people around the world have had their lives and homes torn apart by missiles made by this company in factories like this.

The day Sisters Against the Arms Trade shut down the factory was exactly six months on from the UK’s first air strikes in Syria, an action largely condemned by Syrian people as well as the British public. At the same time, Syria is burning and people are starving. In the week leading up to the action there had been an escalation to the violence in Aleppo, and indiscriminate bombing by the Syrian regime, with no intervention or aid from the UK government.

The Aleppo Is Burning Worldwide Red Protest called on people to “Go out. Yell. Chant. Demand justice. Syrians are being killed for doing the same”, and so we did. As did people all over the world, in over 60 cities. This action was part of a global voice speaking out for Aleppo.

The war in Syria is complicated, but air strikes or other military intervention are not the answer. They will not defeat Daesh’s ideologies, but will make others suffer more. Meanwhile, Assad’s brutal regime is laying siege to cities and barrel bombing civilian buildings. People are starving while the UK does nothing.

A spokesperson for Syria Solidarity UK said: “With the UN failing to deliver, others have a duty to protect civilians. The UK, the US, the Netherlands: all of them have a proven ability to carry out air drops, but all they drop in Syria are bombs. The UK already has the necessary capacity nearby in Cyprus. The UK should stop making excuses and start saving lives."

The UK government is intervening in a way that has serious ramifications for Syrian people, against Syrian people’s wishes.

One of my fellow protesters put it well: “Syrian women are the forgotten protagonists in the Syrian struggle for self-determination. It is the call of Syrian women that we echo today for dignity, self-determination, and food not bombs. The only people who have benefited from the UK’s decision to bomb Syria are weapons manufacturers. MBDA have seen record profits from their deadly business.” 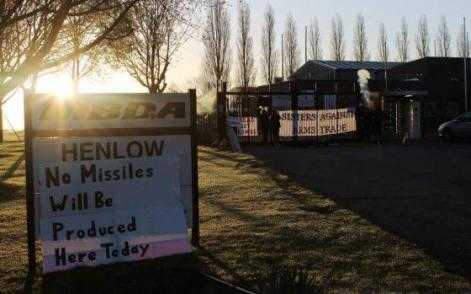 The actions of the Women Against the Arms Trade group were in solidarity with Syrian women, which is an incredibly important cause. But my personal motives also included another issue I care deeply about: the UK arming Saudi Arabia.

Saudi Arabia is a brutal regime with one of the worst human rights records in the world. Yet the UK arms them, and keeps arming them no matter what human rights abuses they commit or laws they break. Even when they use British made arms to repress people.

For the last year Saudi Arabia has been leading coalition air strikes in Yemen, which has been devastating for Yemini people. There is clear evidence Saudi Arabia has been repeatedly breaching International Humanitarian Law, and the majority of the UK public think we should stop arming them. Yet we still do. We are supplying them with (among other things) Brimstone missiles made in the UK by MBDA. We need to stop this, urgently. There is a lot of campaigning to get this company and the government to stop arming Saudi Arabia. Sometimes you have to do what you can to stop the weapons being made in the first place. As one of the women I was protesting with put it: “Because the government continues to enable arms companies to profit from war, it is up to people in the UK to resist.”

And that is what we are doing. For one whole day a group of women won a small victory against the military industrial complex and shut down a missile factory.