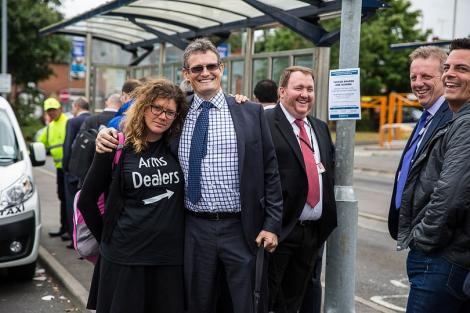 Farnborough International is a biannual trade expo and air show event, hosted by the British government – it most recently took place in July 2016. It combines an exhibition of military and civilian equipment, with a family-friendly air show and “futures day”. Many of the world's biggest arms companies have a presence, exhibiting a range of weaponry including missile systems, armoured vehicles and drones. In 2014, the British government invited delegations from Algeria, Bahrain, Iraq, Libya, Pakistan and Saudi Arabia.

The resistance to the air show in July 2016 was strong, with Campaign Against the Arms Trade and Stop the Arms Fair focusing on the sale of weaponry used by Saudi Arabia to bomb Yemen in a mass day of action. They were joined by activists from Czech Republic, Belgium, Germany, and the Netherlands.

The day the fair started, Human Rights Watch released research which exposed how bombs built in the UK and USA had been used to bomb factories and warehouses in Yemen, leading to shortages of food and medicine, and that weapons had been built and sold to Saudi Arabia after the war began.

Activists – many dressed as grim reapers - held a presence in a London train station, where many of the delegates travelling to the trade event would pass through. They boarded trains, confronted arms dealers on board, and shared information with the public. 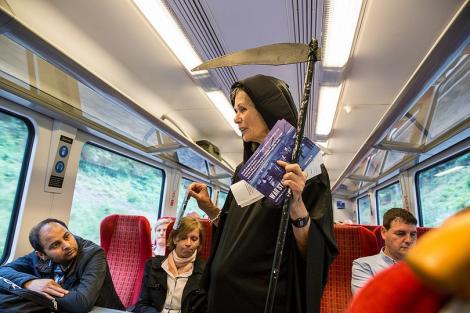 After delivering a petition demanding that the UK stops arming Saudi to the British government, a noisy demonstration was held at the Department for Business, Innovation and Skills, the home of the UK government's arms export unit. Messages were shared from Yemen and other conflict zones. 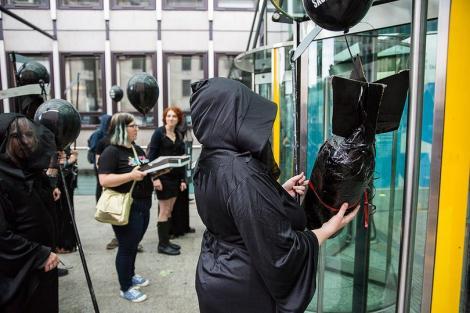 In the evening, the action moved to the Science Museum, a publicly funded museum hosting a networking dinner for arms companies; the lobby of the museum was occupied with a die-in, before many of the entrances were blocked – one person was arrested. Banners were dropped from balconies, and many delegates failed to even get inside.

Ten members of the catering crew decided to walk off shift, preferring to join the protesters outside than serve dinner to arms dealers.