Turkey: International observers at the trial of human rights activists and journalists in Istanbul 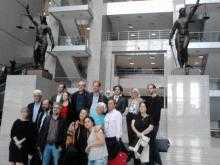 The trial against the president of the Human Rights Foundation of Turkey (TIHV), Prof. Dr. Şebnem Korur Fincancı, the journalist Erol Önderoğlu, and the writer Ahmet Nesin began on 8 November. The prosecutor accused the three of producing propaganda for a terrorist organization because of their participation in a freedom of expression campaign for the pro-Kurd newspaper Özgür Gündem.

Before the hearing, international and local observers were invited by the Medical Chamber Istanbul for a gathering in their centre. On a morning gathering, the International Forum for Justice and Freedom, they emphasised their solidarity with the accused.

Rudi Friedrich from War Resisters’ International and Connection e.V. said, “We need you and your work, especially in such a situation. Turkey is at a turning point. We need you to strengthen people who are engaged in real democracy and the peace process with the Kurds.” Gisela Penteker spoke for the International Physicians for the Prevention of Nuclear War (IPPNW) and stressed: “Our collaboration with the Turkish Human Rights Foundation has been very inspiring for our work in Germany. Şebnem and further members of the Human Rights Foundation were especially involved in the development of the Istanbul Protocol, an official UN document giving guidelines for a trial accepted proof of torture.”

Just before the trial a vigil was organized in front of the impressive modern court building, under the eyes of security forces. The participants in the vigil were demanding freedom of expression. They denounced the countless human rights violations in Turkey. 142 journalists are currently in prison. A list of Reporters without Borders put Turkey at number 151, referring to the freedom of the press internationally. The oppression is also directed towards human rights activists, doctors, teachers and others. The participants in the vigil demanded an immediate halt of the trial against the accused.

Because of the large amount of interest the court room was overcrowded. Prof. Dr. Şebnem Korur Fincancı and Erol Önderoğlu gave very engaged speeches for their defend. Ahmet Nesin had decided not to appear at the trial. Subsequently the lawyers stressed the meaning of the freedom of expression and were referring explicitly to the necessary peace process with the Kurdish people in Turkey.

No matter what comes and how it ends”, Prof. Dr. Şebnem Korur Fincancı declared finely, “I’m attached deeply by the presence of so many supporters. It makes me happy and confident. As long as we struggle, we will win.”