Towards an ecosocialist horizon 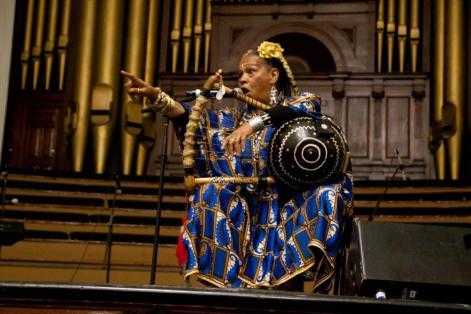 Edited by Hannah Brock of WRI, from a longer trilogy of essays "War, Peace and Crossfire in Cape Town" written for the "Small Actions, Big Movements" conference in July 2014, available online here.

The winds of climate change will fill the sails of battleships, pump the bellows where weapons are forged, and turbo-charge tanks.

Ecological predictions for the 21st century are enough to warrant comparisons with the worst of past human catastrophes1. And this is just the beginning. As devastating and catastrophic as climate chaos will be, the human reaction may well be worse. Old wars will be intensified, new wars will emerge. Those dedicated to resisting war have never faced a greater danger or a more immediate mandate, and the horizon for their tireless dedication is climate justice. Climate justice is the prerequisite and substance of peace in the 21st century and beyond.

The majority of humanity, which lives close to the soil and watches the sky, lives the urgency and knows the dangers. Yet it seems that those in the global North have not understood. Some retreat into isolation and survivalism; “the politics of the armed lifeboat.”2 In avoiding illegal collective action and dismissing big picture vision, we are following a recipe for temporary personal safety at the cost of permanent universal danger.

Why is this? To chart a prefigurative path to peace, we must first understand what is holding us back.

What Would Steve Biko Do?

“Our originality and imagination have been dulled to the point where it takes a supreme effort to act logically even in order to follow one's beliefs and convictions.” (Biko 19)

Sound familiar? We know the climate science and recognize the dangers, we know what our principles are, and yet we do not act. When we do, it is rarely on a scale commensurate with our crisis.

system as to make even our most well-considered resistance to fit within the system both in terms of the means and of the goals...Not only have they kicked the black but they have told him how to react to the kick.” (Biko 40 and 72) And so we respond to climate catastrophe with carbon markets, to new wars with old protests. This conditioning of our resistance has been institutionalised as never before with the ascendency of the non-profit industrial complex, whereby the ruling class designs and directs its own loyal opposition.3 And so more than ever we have to heed the warnings of Biko: “In laying out a strategy we often have to take cognisance of the enemy's strength and as far as I can assess all of us who want to fight within the system are completely underestimating the influence the system has on us.” (Biko 41)

The influence of the system is not only institutional. It is not only that the World Wildlife Fund takes money from the dirty energy industry - the rot is far deeper. Our originality and imagination have been dulled, so our resistance has been dulled.4 We seem to be not only incapable of mounting an effective challenge, but also of understanding our own failures. We do not shut down the fossil fuel war economy because we cannot imagine life without it.

So we do our best to “tweak armageddon”5 with all kinds of false solutions: carbon financing, carbon taxes, the usual rigmarole of petitions and electoral politics, and most ominously of all, geoengineering.6 These false solutions cannot be better described than by Biko: “The whole idea is to made to appear as if for us, while working against our very existence” (Biko 90).

In making a break for it, we must define what we want. “Climate justice” is a deeply comprehensive term, if one respects the depth of its implications. Quite literally it means global justice; not only for humans, but all species and all ecosystems. It requires not only stabilization and draw-down of carbon emissions, but an end to all ecosystem destruction.

So what is needed for climate justice? While many push for incremental reforms, or for emissions and temperature targets that tolerate mass extinction and genocide, Philip Sutton persuasively argues the contrary: “there is no point in pursuing goals that, if achieved, would still create intolerable conditions”7 The goal, he explains is “100% decoupling of the economy from environmental damage.” Furthermore, it is technically possible to begin immediately. Drawing on the experience of World War 2, when governments seized control of private industry, retooled, and produced not for profit but for use, Sutton argues for a “holistic wartime mobilization.”

What is our timeline for this? Unlike the timeless movements for truth, justice and dignity, the climate justice movement has an expiration date. While the principles of climate justice8 will prove lasting guides no matter what temperature it is, the rights of future generations (human and non-human) to a safe climate will be won or lost within the next decade. But there is still time to turn the tide.

In the light of this urgency, we must make a candid assessment of our movements. While good and noble work is being done in the peace and environmental movements, it is not nearly enough. The triumphalism of assembling large numbers of people will turn quite bitter in hindsight, if actions do not quickly begin to have concrete effects on carbon emissions and the preservation of biological diversity. So our movements must get much, much bigger, in both quantity and quality.

We do not need more data, more time for conditions to develop, more analysis of the conjuncture. We have to act now. But how?

Against the ritualised protest politics which have gotten us nowhere fast, we must imagine

another form and content for politics. A call for climate satyagraha, emerging from the WRI Cape Town conference in South Africa (July 2014), urges us to consider the spirit of satyagraha as a framework for our movements for peace and climate justice. Pioneered by Gandhi but practised by millions, satyagraha is an action and a way of life. Variously translated as “truth-force” and “soul-power”, it is a method of personal transformation and mass action.

The concept of satyagraha is all encompassing, with equal emphasis on self-purification and system change. A calling for personal sacrifice is central. “Things of fundamental importance to the people must be purchased with their suffering,” Gandhi insisted. Satyagraha calls on people of relative privilege to break from the spiritually poisonous comforts accorded to them.

Capitalist society has thrived on the eradication of authentic spirituality9. Yet the rise of fundamentalism indicates that peoples in these societies are unsatisfied with the prevailing nihilism and schizophrenia of consumerism and empire as a way of life. People earnestly want deeper meaning in their lives, and are willing, even eager, to make sacrifices for a better future.

Satyagraha calls upon us to abandon sectarianism, to always regard adversaries as potential allies. Given that all life on earth is threatened by the continuation of oppression as usual, there has perhaps never been a greater constituency for satyagraha. The 99% has a genuine basis for life-or-death unity in defence of Mother Earth.

Satyagraha is a prefigurative path to peace. It calls for an embodied politics which celebrates, and struggles to amplify, the unity of means and ends. The satyagrahi must embody in all respects the goals of the movement, must be the change they want to see in the world.

From Satyagraha to Ujamaa

It is not enough to end war, or to stop the extraction of fossil fuels. In fact, these things are

impossible to even conceive of in isolation. The world system must be changed and the movement to change it must prefigure the alternative. The new world must be built and the old one dismantled, and these are one and the same process.

At an international conference in South Africa in 2006, representatives from 14 countries and 107 organizations gathered on the 100th year anniversary of Gandhi's first satyagraha, to discuss and debate the meaning and relevance of satyagraha in the 21st century. A connection was made at that time between satyagraha and Julius Nyerere's concept of ujamaa, or African community socialism.10 Ujamaa is not only a theory but a practice: an incipient mode of production and a vision of socialism whose nucleus is the cooperative village economy. Since the times of Nyerere, neither the theory nor the practice of ujamaa have died.11 In an age of climate chaos, ujamaa is a theory and vision of a return to the source, a path and a destination, to fulfil the goals of movements to end war and the fossil fuel economy.

In Cape Town City Hall two years ago, rooms filled with stories of horror and pain, suffering and sacrifice. Passions flared over differences of context and circumstance. But emerging from the map of a continent and a world at war, was the reminder and the promise of a common humanity, seeking out new horizons.

1Archbishop Desmond Tutu warned in 2008 that if effective action to prevent catastrophic climate change was not taken, the combined effectswould cost the lives of 185 million lives in Africa alone by the end of the century (http://www.youtube.com/watch?v=onSHD4sAuB4). Since then, the assessments of the scientists he was quoting have become increasingly severe. Not only deep ecologists but NASA has warned that human civilization itself is at stake. (“NASA-funded study: Industrial Civilisation Headed for 'Irreversible Collapse'?,” by Nafeez Ahmed, The Guardian, March 2014)

2See Tropic of Chaos: Climate Change and the New Geography of Violence, by Christian Parenti, 2012

3The Revolution Will Not Be Funded: Beyond the Non-Profit Industrial Complex, edited by INCITE! Women of Color Against Violence, South End Press 2009. Also see Foundations and Public Policy: The Mask of Pluralism, by Joan Roelofs, 2003

4“Like A Dull Knife; Reflections on the People's Climate Farce,” by Quincy Saul, Truthout, September 2014

6No joke: See Earthmasters: The Dawn of the Age of Climate Engineering, by Clive Hamilton, 2013

9History and Spirit: An Inquiry into the Philosophy of Liberation, by Joel Kovel, 1991

10For an archive from this conference, including both a general declaration and summaries of presentations, see http://sapf.blogspot.com/2006_10_01_archive.html

11For one inspiring modern-day example of ujamaa in action, see the work in Tanzania of the United African Alliance Community Center: http://www.uaacc.habari.co.tz/