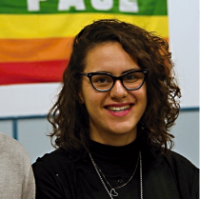 Refuser Tair Kaminer has been exempted from the army for 'bad behaviour'. We say: if everyone 'behaved badly' in this way, the world would be a much safer place!

Tair spent over 150 days in prison for her refusal.

Thank you to everyone who's sent CO Alerts for Tair, and supportive messages. Conscientious objectors Tamar Alon and Tamar Ze'evi are still in prison and we will keep you updated about their cases. In order to send your protest emails to support Tamar and Tamar, click here.

Tair Kaminer released from military service after spending 150 days in prison for her refusal to serve due to the IDF’s policies in the occupied territories.

Young Israeli women Tair Kaminer and Tania Golan pose for a final photo outside the Tel Hashomer induction base where they announced their refusal to serve in the Israeli army, January 31, 2016. Kaminer was sentenced to prison.

On Thursday morning a military committee found that Kaminer, 19, was not fit for military service due to her “poor and severe behavior” — namely the fact that she refused to serve in the army due to her opposition to its policies in the occupied territories.

The decision to release Kaminer comes a week after she stood before the IDF’s conscientious objectors committee, where she laid out her case for exemption. The committee has historically decided to not exempt female conscientious objectors such as Kaminer, who declare their refusal to enlist in the army due to their explicit opposition to the occupation (as opposed to pacifism, for example).

Before her imprisonment, Kaminer performed a year of national service with the Israeli Scouts (“Tzofim”) in the southern development town of Sderot. There she volunteered with children who suffer from trauma following multiple wars in Gaza and continual rocket fire on the city. “The children I worked with grew up in the heart of the conflict and have had extremely difficult experiences from a young age, experiences that caused them to feel hatred, which can be understood, especially when it comes from young children,” Kaminer wrote in a statement published this past January.

“Like them, many children who grow up in Gaza or in the West Bank, in an even more difficult environment, learn to hate the other side,” the statement read. “They, too, cannot be blamed. When I look at all of these children, and the next generation on both sides and the reality in which they grow up, I see only more trauma and pain. And I say enough! That is why I refuse: so that I do not take an active part in the occupation of the Palestinian territories and the injustices that the Palestinian people face under occupation, so that I do not take part in this circle of hate in Gaza and Sderot.”

"IDF releases longest-serving female conscientious objector" is an article by Edo Konrad which was first published on +972 Magazine on 14 July 2016.