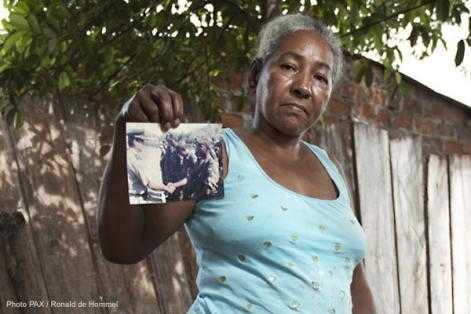 The 'Stop Blood Coal' campaign is run by PAX in the Netherlands, targetting the Drummond and Prodeco (the Colombian subsidiary of Switzerland-based Glencore) mining companies. The campaign aims to expose and challenge the links between paramilitary violence and coal mining in Colombia, support communities in their search for truth and reconciliation, and pressure European energy companies to take action against their suppliers accused of human rights abuses. PAX argues that a quarter of Europe's coal imports could be considered 'blood coal'; last year, the Netherlands alone imported 15.4 million tonnes of coal from Colombia.

Between 1996 to 2006, residents of the Cesar mining region of Colombia suffered greatly from paramilitary violence. At least 3,100 people were murdered, 55,000 farmers were driven from their land, and hundreds of people disappeared. Even today, the atrocities faced by victims and their surviving relatives have never been acknowledged, let alone any compensation being awarded. Perpetrators and witnesses have declared under oath in legal processes and to PAX how the Cesar-based Drummond and Prodeco mining companies supported the paramilitary forces with money, equipment and information.

The paramilitary organisation Juan Andrés Álvarez Front (JAA) terrorised local farmers, whose land ultimately ended up in the hands of the mining companies. For example, the JAA Front began to terrorise the community of El Prado in 2002, which existed on state-owned land. On May 19th the JAA killed 5 people; according to testimony from 'El Samario' this action had the express intention of removing the people from the land. Seven more people were killed over the following months, and 48 of the 51 families in the community fled. The plots were occupied by paramilitary front men, and corrupt officials provided the new landowners with falsified papers. In 2009, the state signed over ownership of the land to Prodeco.

The mining companies deny any involvement, but those victims of human rights violations who stand up for their rights, are still being threatened. PAX expects that governments and energy companies, in their role as buyers, hold their suppliers - the coal mines - accountable for the situation of the victims.

The campaign has already had some wins, with two European actors in creasing pressure on the mining companies; Danish energy utility Dong Energy has conditionally suspended their coal imports from the Cesar mining region, and the French bank BNP Paribas has blacklisted Drummond.

In the 90s, the region was held by two large guerilla groups, FARC's 41st front and the ELN. Both groups carried out attacks against mining infrastucture, and kidnapped staff of Drummond and Prodeco. A paramilitary organisation – the AUC – was formed in 1997, out of a number of smaller paramilitary “self-defence” groups run by local ranchers to combat the guerillas. The approach of the AUC was that it would be possible to defeat the guerrilla's by terrorising the civilian population in areas where FARC and ELN operated, and in some cases depopulating an area entirely.

The mines were already defended by the state military; the military turn funded local 'self-defence' organisations through the project “Plan Convivir”, but by 1996 Prodeco had decided that the local groups were providing insufficient protection from guerillas. The Dark Side of Coal report includes testimony from “El Canoso” that managers of Prodeco “made a cash payment to El Profe [commander of the AUC] as soon as he arrived by helicopter at the mine site” after he brokered a deal between the company and the AUC.

About the involvement of Drummond, El Canoso described a meeting of both companies, that concluded with everyone present agreeing “that we would give the AUC a monthly payment to cover the salaries, food, and costs of the AUC troops We also agreed to buy the AUC some vehicles and supply them with fuel.” El Canoso alleges that the mining companies were involved in stationing paramilitary troops, and that they arrived violence in the region increased dramatically; “ those districts, municipalities, and neighbourhoods where inundated with a wave of crime every night.” The report alleges the CEO of Drummond consented to a payment of $1.1 million to the Colombian military, despite the companies security manager predicting that the militaries plans would “ bring with it egregious human rights violations”

The JAA was formed in 1999 from other groups in the region after a reorganisation of the the AUC. The JAA operated against the guerrila groups in both the towns and villages where Drummond and Prodeco have mines, and along the rail road used to take coal to port; the PAX report includes testimony of a falsified 'FARC' JAA attack on the railroad – and assassination of five people falsely identified as FARC paramilitaries – to ensure a speedy payment was made to the organisation.

By 2002, the JAA had grown to over 250 heavily armed men, and by 2006 included over 500. The JAA were disbanded and demobilised in 2006 after the Ley de Justicia y Paz (Justice and Peace Law 975/2005) was enacted; violence and human rights abuses continued however.

For more information, see the website of PAX: http://www.paxforpeace.nl/stay-informed/in-depth/stop-blood-coal or (in Spanish) the PAX Colombia site: http://paxencolombia.org/