Call out for The Broken Rifle 107: Prisoners for peace, prisons of war? 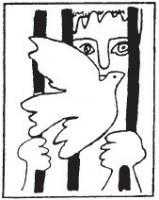 Every year - on 1st December - War Resisters' International and its members mark Prisoners for Peace Day, when we publicise the names and stories of those imprisoned for actions for peace. Many are conscientious objectors, in jail for refusing to join the military. Others have taken nonviolent actions to disrupt preparation for war. Supporters send cards and letters in solidarity.

Prisons are sites of violence and social control – for those imprisoned for nonviolent political actions, and for all. The prison-industrial complex is intrinsically linked with militarism.

The next edition of The Broken Rifle, coming out in December 2016, soon after Prisoners for Peace day, is a collectio nof reflections from some prisoners for peace who have been incarcerated for taking actions against militarism.

It is also an opportunity to explore the idea of prisons as institutions that mirror the dehumanising violence of militarism, how profiteers make money from violent suppression (and the forced labour of people in prison), and reflect on how prisons are founded on an idea of security based on surveillance, policing and weaponry: prisons of war.

If you would like to volunteer to submit an article, or to suggest someone else that might want to write for it, please write to us by 21st November to info@wri-irg.org with the subject 'Broken Rifle 107 article'.