A Call to Action: International Week of Action Against the Militarisation of Youth 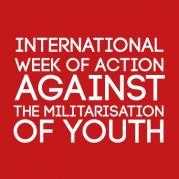 Would you like to take action against the militarisation of youth with many others across the world?

You can join War Resisters' International's week of action, which will be held between 14-20 November for the third time this year. You can join as an individual or as a group.

War Resisters' International is organising the 3rd International Week of Action Against the Militarisation of Youth from 14 to 20 November this year. The week is a concerted effort of antimilitarist actions across the world to raise awareness of, and challenge, the ways young people are militarised, and to give voice to alternatives.

Last year the week was held with various activities, including direct actions, talks, workshops and many other events, with the participation of groups from many countries including Colombia, Britain, Germany, Finland, Nepal, New Zealand, Spain, the USA, and Turkey. The events from last year followed the first ever week of action held in 2014, and a day of action held in 2013.

Recruitment of minds and bodies

Today militaries, armed groups and others profiting from war are using various ways to access young people, not only to recruit bodies, but also to recruit minds into their military cause. In some countries, the militarisation of youth is more apparent and obvious – young people (mainly, though not exclusively, young men) are forced to join the military through conscription. This might also include forced recruitment or recruitment of children. In many other places – including those places where conscription has been suspended or abolished - governments, arms dealers and other war profiteers have a vested interest in indoctrinating young people to be positive about military actions.

What strategies and practices are these state and non-state parties following in order to convince young people to, actively or passively to support their military cause? What can we can do to counter these strategies of war profiteers? In this year's week of action we are particularly focusing on those many ways that young people's minds and bodies are recruited into the armed forces, and to war.

What Can You Do?

If you would like to join the activists all around the world taking action against the militarisation of youth, contact us via cmoy@wri-irg.org. Please visit www.antimili-youth.net for updates and further information.