I remember standing a few years ago, tears in my eyes, feeling yet not feeling my body, trying to shout but choked up, tears silently streaming down my face, knowing that I don't have the power to stop it. I remember I didn't shout, I felt paralysed, I held myself in my strong arms and felt lost. I remember slowly losing sensation, though pain and horror ran through every cell of my body. No one wanted to see or hear me, most of all not that one who was gripping me. He needed to and I was there, an empty vessel for his urges and needs. 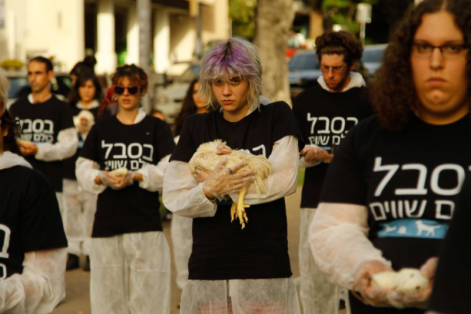 Now I'm standing upright, and am holding in my shaky arms a tortured, bleeding corpse that had everything taken from it. They took because they could, took forcefully, because that's what everyone does, because there are many who still believe that some lives are worth more than others, because some still separate between blood and blood, between pain and pain. With tears in my eyes I stand holding the footprints of a life that was and is no more. All that is left is its shadow, only the meat.

'The personal is political', and in this case the political is extremely personal to me, mainly because I'm writing about sexual exploitation, objectification, separation and dissociation. When I draw parallels and make connections between the different forms of violence: towards women, towards both human and non-human animals and planet earth, I speak for example about the role Israeli society designates for women, as breeders and mothers, as soldiers in a demographic war, required to produce soldiers for a war that isn't theirs. I speak of forceful insemination, the use of "rape racks" where cows stand tied, about endless cycles of pregnancy and childbirth that always end with taking the calf from their mother, about relentless milking that injures the worn out body that almost becomes unrecognisable. About pregnancy after pregnancy, birth after birth and loss.

I speak of gender-based separation and selection. When a human baby is born it is pronounced male or female, and each option designates that baby to a completely different life. On the day of their birth, baby chicks in the egg industry are also classified: the males, that don't lay eggs, are thrown into the trash or into a grinder, and the females will be de-beaked and sentenced to a life of harsh imprisonment, where they will never see the light of day or be able to spread their wings. Their bodies will become egg producing units until they collapse or lose financial value and will be sent to be slaughtered. Slaughter is the end of violence, its liberation. I speak of the practice of breast enlargement in meat chickens so that there is more to sell, and breast augmentation surgeries marketed to women as part of the beauty ideal they should aspire to, etc.

We've grown accustomed to seeing commercials objectifying women, selling our bodies like products. We're used to looking at ourselves in the mirror and hating what we see, used to being touched without permission and used to the pain that rips through us. Where I’m from, we're used to the military occupation, seeing soldiers with guns lining the streets, the separation wall and apartheid roads (separate roads for Israelis and Palestinians), child arrests and the murder of protesters solely on the basis of their being Arab. We're used to seeing corpses as food, to separating a mother from her baby in order to steal the milk she made for them, to purposefully blinding rabbits and rats for a new shampoo, we're used to skinning animals because it's "pretty".

We're accustomed to destruction of the rain forests for unnecessary products, to a daily reality of buying and throwing things out, to a world where the oceans are dying and most of the world's grain goes to feeding incarcerated animals whilst half the world suffers obesity, and the other starvation. We're used to the destruction of millions of species because of one species' irresponsibility. We're used to objectifying the environment and viewing it as a resource, as something that should satisfy our false immediate needs. The occupation is the same occupation, occupation of land, of people, of women, of animals. We've accepted and internalised the daily violence we encounter. The violence our bodies endure and the violence we all participate in. And I wonder, when did we stop to think of the price? And who is paying it? And how do we stop and why are we all silent? And when did we lose hope for a better world?

'The banality of evil' is already known, but what scares me more is the banality of silence in the face of evil. As the granddaughter of a holocaust survivor, I was taught to never stand in silence, never let things happen next to me yet carry on. I learned that with power comes responsibility, and that it is a duty to stand up to violence and injustice and to act, regardless the price.

They say the hard part of being vegan isn't at all related to food. The hard part is becoming exposed to humanity's dark side and trying to maintain hope. It's trying to understand why people - that in every other walk of life are good and kind - continue to participate in violence against animals for their own pleasure and convenience, nothing else. I believe that a vegan diet is much more than a culinary preference, and can't even be simply explained by "loving animals". It seems to me that choosing a vegan diet is composed of a wider world view that sees oneself as a part of the world, not its centre. As someone born and raised in Israel, I have witnessed most of my school mates and family members going to serve without question in an occupying and oppressive army. I met them more than once, face to face, at demonstrations where I stood by the side of my Palestinian allies and they stood in front of us in their uniforms, holding weapons. The choice, even if it is a difficult one, is here and now, solidarity or oppression, a shared destiny, or war?

Throughout human history, the bill of rights has developed and expanded to allow larger parts of society to be included in it. From the Magna Carta that afforded rights to a narrow section of the nobility, through the United States' Declaration of Independence that glorified freedom and equality (though mainly being drawn up by Thomas Jefferson who himself owned black slaves), through extending women the right to vote, granting blacks human rights, recognising indigenous peoples' rights, etc. Alongside these developments, many, and in fact most living creatures, were left outside the scope of the universal bill of rights, even when it comes to the most basic of all: the right to life. A few brave attempts at extending the bill of rights to those beyond the scope of Darwin's nobility caste failed (Stone, 1972).

In my view, it's high time we recognise that the division between human animals and non-human animals is more arbitrary than scientific, and isn't significantly different than that which separated white people from black people; men from women; and heterosexuals from homosexuals. Relationships of an oppressive nature base themselves on terms separating "us" from "them", and establish a clear separation and hierarchy between the oppressed and those oppressing them. It is my belief that we should see non-human animals that share planet earth with us as individuals with their own sense of purpose. Their value should not be measured based on their ability to satisfy man's needs or the ecosystem's needs, and we should treat them with respect that originates not just in our hearts due to compassion, but with respect that is part of a greater holistic sense of justice.

I think that in order to create a better world, we must try and rid ourselves of the aggressive cultural patterns we were raised on. Patterns that taught us to classify others as either "them" or "us" and that instructed us to rank certain groups as inferior. Throughout history the "other" has changed many names: women, black people, Jews, Muslims, etc. But the animals remained invisible. Racism, the patriarchy and speciesism are all different sides of the same coin, of the same misguided logic that some lives are worth more than others. Turning non-human animals that have needs and wants and feelings into dead products and commodities is one of many representations of society's ills. A society that places financial gain above any and all moral considerations, from sweatshops to woman trafficking to slaughter houses, a sick culture that violates the ecological balance and wreaks havoc on the planet where we live and on all who inhabit it. God indeed is in the detail, in the language, food, in how we treat one another, in who we chose to eliminate from our discourse and hide from our hearts. The power struggle can be recognised in our smallest daily decisions that to us often seem meaningless. On every trip to the store we can chose to buy dairy products or eggs, or chose to refuse to support an industry that turns live, feeling beings into machines, in an industry polluting planet earth beyond recognition. Each and every time we have the power to choose between a shared destiny or alienation, between compassion or violence.

Indeed, 'the master's tools will never dismantle the master's house', the hand of the butcher can't differentiate between human and animal blood, pain and suffering. The armed soldier, the butcher, the rapist. The hand is the same hand and the house is the same house. Turning 'someone' into 'something', belittling, exploiting bodies, sexuality, objectification and wounding the soul, invisible and normalised violence, etc., these are the mechanisms of oppression and exclusion that we all use and should all fight against. No one wants to be made into a birthing machine, no one wants her newborn torn from her, no one wants her house or habitat destroyed and until all are free, no one really is.