Activists in Melbourne erected a giant tripod with a climber hanging from it, to blockade a Wilson Security car park at Melbourne Convention Centre. The blockade delayed the start of the prestigious Security Exhibition and Conference being held in the centre, at which government representatives and members of ASIO, AFP and Border Force will be in attendance. In Sydney refugee activists also shut down Wilson Security Circular Quay car park in solidarity with the Melbourne convention blockade and refugees imprisoned on Manus Island and Nauru.

Refugee supporters involved in the Boycott Wilson campaign are calling on Australians to boycott and blockade Wilson Security car parks over their human rights abuses and torture of refugees on Manus Island and Nauru. The group are demanding the Federal Government cancel the contracts, close the camps and bring the refugees to Australia.
The group also noted Wilson Security should take heed of the demise of Transfield/Broadspectrum due to their involvement in the detention industry. In the recent takeover of Broadspectrum by Ferrovial, the company announced that once the current Broadspectrum contract for management services in Nauru expires in February, 2017, they will withdraw from the refugee detention industry. This leaves the government without a primary contractor to manage both Manus and Nauru, with only Wilson Security apparently waiting in the wings.

Gaye Demanuele, Boycott Wilson spokesperson explained: “Wilson Security is at increasing risk of damaging its brand name and its profits unless it withdraws from the refugee detention industry. Not only is it an immoral way to make money, a numbers of Wilson’s guards have allegedly committed crimes against asylum seekers, including rape and physical assault of children and adults.” 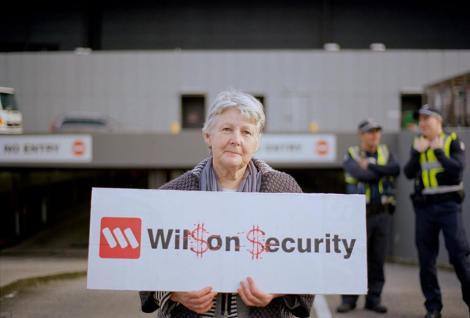 The boycott campaign against companies like Wilson Security - who profit from the detention industry - appears to be picking up steam; the City of Sydney, along with Byron Shire Council, Marrickville Council, Fremantle City Council, Bass Coast Shire Council, Shire of Augusta-Margaret River have all adopted the #NoBusinessInAbuse pledge. Other councils, including Moreland City and Yarra City are considering the proposal. Many more will follow in direct response to residents and activists demanding an end to the detention centre industry’s abuse of asylum seekers on the public purse.  Unions are also in the process of adding their strength to dismantling the detention centre industry’s profiteering on the illegal detention of asylum seekers. The Australian Nurses and Midwives Federation ANMF (Victorian branch) passed a resolution at their recent delegates meeting calling on health services to not renew parking management and security service contracts with Wilson.

Sam Castro, spokesperson for WACA (Whistleblowers, Activists and Citizens Alliance) stated that “it is unusual that Wilson Security would be missing in action from the biggest security event in the southern hemisphere with contributors including major industry players and their partners: Borderforce, Australian Federal Police, ASIO, the Attorney-General’s Dept and other various government departments and officials”.