Why gender matters for building peace

One of the most extraordinary nonviolent, transnational movements of the modern age was the women’s suffrage movement of the first two decades of the 20th century. New Zealand first extended the franchise in the late 19th century—after two decades of organizing efforts. As the new century began, women’s suffrage movements gained strength in China, Iran, Japan, Korea, the Philippines, Russia, Sri Lanka (then Ceylon), and Vietnam. Another 20 years and women were enfranchised in countries around the world, from Uruguay to Austria, the Netherlands to Turkey, and Germany to the United States. Few if any of those leading the campaigns for the ballot for women would have identified their approach as one of nonviolent action, nor would they have known its philosophical underpinnings or strategic wisdom. Like most who have turned to civil resistance, they did so because it was a direct method not reliant on representatives or agencies and a practical way to oppose an intolerable situation.

What exactly is the link between the rights of women, gender, nonviolent action, and building peace?

The word gender originates with Old French and until recently pertained mainly to linguistic and grammatical practices of classifying words as either masculine, feminine or (in some languages) neuter. The Oxford English Dictionary cites the earliest English usage in 1384. Chaucer used the French spelling gendre in 1398. UNESCO’sGuidelines on Gender-Neutral Language note that a person’s sex is a matter of chromosomes, whereas a person’s gender is a social and historical construction—the result of conditioning. I would further define the “feminist” project as the struggle for women’s emancipation, the insistence that women should be free as human beings to make fundamental choices in their lives. 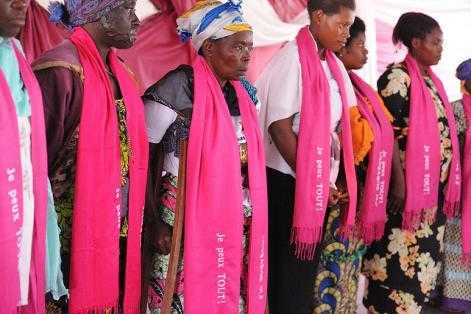 Gender is not women’s lib by another name. Nor is it to say, with respect to nonviolent action, that women exude maternal attributes or possess a reflexive interest in peacemaking. Notions that women have a “natural” inclination toward conciliation and peace delegitimize the voices of women in policy and international relations. Rather, as Susan Moller Okin shows, the “social institutionalization of sexual differences” goes to the heart of politics, and therefore, peace.

At the University for Peace (UPEACE), where I teach, the gender and peace building department has persistently recognized the importance for young peace builders of studying nonviolent action. This recognition is partly related to an insight explained by Pam McAllister, who argues that “most of what we commonly call ‘women’s history’ is actually the history of women’s role in the development of nonviolent action.”

Programs and procedures for the empowerment of women have increasingly been recognized as fundamental to achieving durable peace. Data gathered over the past three decades show that improvements in the education and status of women stabilize and elevate the whole of societies. The uplift of women and their participation in public policy is now widely understood to be essential to economic growth, health status, reducing poverty, sustaining the environment, and consolidating democracy in all societies, including those long bent by authoritarianism and despotism.

Essential to the building of peace is an understanding that the ideologies and structures of patriarchy are among the most resilient systems of domination in human history, and are explicitly related to the socialization of men as warriors and exclusion of women from policy. The longevity and entrenchment of this social system has benefited from justifications of itself as “natural” and divinely sanctioned. Patriarchy has permeated structures and assumptions of power and economics, including forms of labor, presumptions of representative parliamentary bodies, religious dogma and the orthodoxies of faith traditions and leadership, military services, and concepts of the meanings of security.

In Africa, the exclusion of women is now being inferentially linked to the root causes of acute violent conflicts. For example, their customary invisibility in Rwanda is part of the background to 100 days in 1994 in which nearly one million unarmed persons were slaughtered. Crimes went unhalted. The international powers remained silent. (It should be noted that women participated in the genocide as well, killing other women or inciting men to rape and kill Tutsi women—as in the case of Pauline Nyiramasuhuko, now on trial in the International Criminal Tribunal for Rwanda, in Arusha, Tanzania.) In 2002, Rwanda’s secretary general for the ministry of gender, M. Claire Mukasine, now an elected senator, told a visiting UPEACE delegation of which I was part that Rwandan governance had traditionally excluded women from public affairs. “Rwanda had no tradition whatsoever of women being able to speak in public,” she said of the colonial period and onward.

It was assumed that the father, brother, or husband speaks for the women; in the past, women never took a stand in public. They were not permitted to speak out at community meetings or the elders’ sessions. We think the exclusion of women is connected to the sad events in Rwanda.

The results of this recognition are striking. Today, Rwanda has more women on an absolute and proportional basis of its parliamentarians than any other such legislative body worldwide.

The awarding of a 2011 joint Nobel Peace Prize to a Liberian woman, Leymah Gbowee, embodies the links between gender, war, peace, and nonviolent struggle. Miriam O’Reilly’s interview of her for the BBC World Service illustrates the connection. In the midst of civil war led by the warlord Charles Taylor, Gbowee’s Women and Peace Network in 2000 brought together thousands of Christian and Muslim women to sit-in in a football stadium, exerting their popular defiance against “all the violence around us.” They had to protest, she maintains, because “there were no other possibilities. We had no option of being invited to the peace talks. We put ourselves out there as a symbol.” The women called for an immediate ceasefire. When it was violated, the network turned to another nonviolent method: Lysistratic nonaction, refusing sex with their husbands.

This method is named for Aristophanes’ farce of 411 B.C.E., first performed in an Athens exhausted by the Peloponnesian War. His hit play, Lysistrata, featured a sex strike by the war-weary women of both sides to end hostilities. Gbowee told the BBC that the idea of a sex strike came from frustration, as a means of pushing Liberian men, who had been silent and thus complicit with the war and violence. Maintaining that they would be fasting as an act of denial, the Liberian women held that as long as they were protesting and fasting, they could not be intimate with their men.

“We said let’s place our already battered bodies into the streets,” Gbowee remembers. “Let’s show the world that with our broken selves we can heal the nation.”

In 2006, the newly elected President Ellen Johnson Sirleaf, another of the 2011 Nobel Peace laureates, formally requested Taylor’s extradition. Upon arrival in Monrovia, he was transferred to the custody of the United Nations. He is still held in the U.N. Detention Unit in The Hague, where he is on trial for his role in the civil war.

Taking gender seriously in the process of building peace, finally, is the job of everyone, not just of women. A former student of mine is the gender officer for the Nigerian parliament, and he, along with several other male, West African former students of mine, are doing important and strategic work. A Pakistani woman student, having completed her doctorate in gender at the London School of Economics, soon returns home to teach with these multiple areas of strength. An Israeli former student completed her doctoral studies, works for a civil-society organization, and is active in the peace movement. Each in different ways recognizes that building lasting peace must include taking questions of gender seriously.

This article is first published on Waging Nonviolence on November 24, 2011