It may seem to be stating the obvious to name three of the world's biggest arms companies as this month's 'War Profiteer of the Month', but it would be wrong to ignore the degree of profiteering taking place from the escalation in bombing of Syria...

Several arms companies selling munitions to the French military and other NATO countries saw their stocks rise – some by over 5% - just two days after militants killed over 130 civilians in Paris. Lockheed Martin, Raytheon and Northrup Grumman were among large arms companies that saw an increase almost immediately after markets opened on Monday 16th. The speculation by traders came the day after Francois Holande declared that France was “at war” with ISIS, and several other countries are considering whether and how to escalate their military operations in Syria.

US journalist Glen Greenwald said it was 'amazing' how the stocks of companies of Raytheon, Northrop Grumman, Lockheed Martin, and Thales all rose 'the minute markets opened' on the first day of trading after the terrorist attacks in Paris, as investors gambled on an increase in violence in the Middle East. Speaking to Democracy Now!, Greenwald said “Instantly... there was a massive leap. It was like buyers and investors were frothing at the mouth to the buy the stock of the leading arms manufacturers.” All of the share prices rose sharply when markets opened, and remained up despite little growth in the markets more generally.

The share price of Lockheed Martin, who produce the Hellfire missile being used by the US military, gained 3.5%; 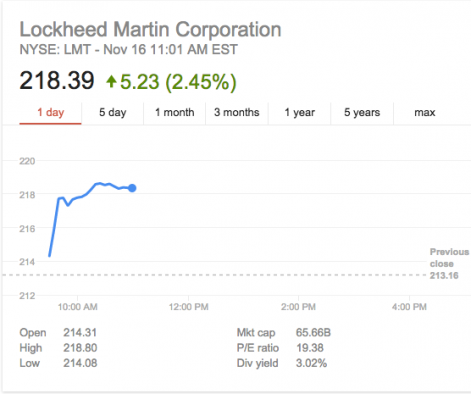 Shares in Northrop Grumman, who have recently won a contract to build a new stealth bomber for the US military, rose by over 4%; 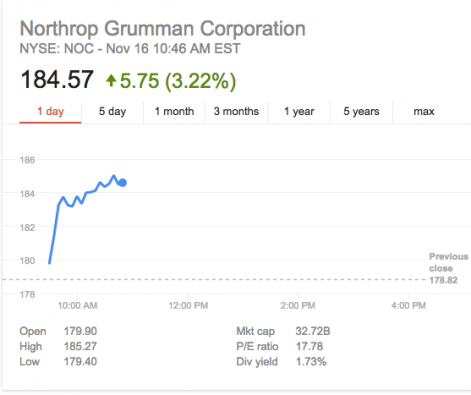 While shares in Raytheon, who produce Tomahawk cruise missiles, grew by 4%. 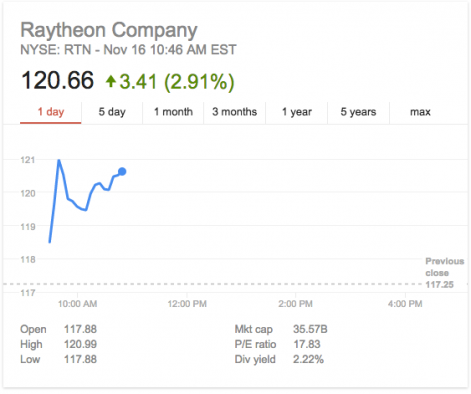 Some analysts speculated that an escalation of the conflict and European state's growth in spending on security could see a $50 billion 'boost' for the European arms trade. According to Fox Business, Hollande also announced that France would 'increase security forces and freeze job cuts' in the defence sector until 2019, in response to the attacks. In the defence spending review, the UK government announced a £12 billion increase in spending on the military (a 3.1% real term increase), to include a 'rapid strike force' of 10,000 soldiers and new warships.