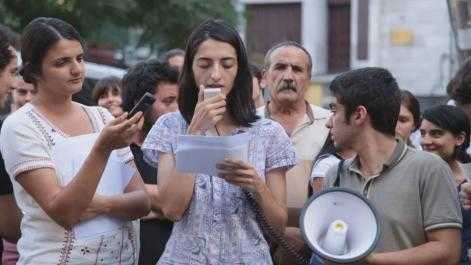 In early September, Conscientious Objectors from across the world gathered in Istanbul for a CO Symposium. As violence of the Turkish state military against the Kurdish community in Turkey increases, CO's gathered to discuss their objection to war and it's causes, before making public declarations of their objection in Galatasaray Square. For a full report, click here.

The proposed law would allow CO's to work for any public institution, NGO, or other organisation working in the public interest. CO's would be paid, covered by welfare benefits and social security, and not be discriminated against.

On 20 July, an attack against civilians in the southern Turkish town of Suruç killed dozens of people. Conscientious objectors Alper Sapan and Polen Ünlü were amongst those killed. WRI affiliate Vicdani Ret Derneği have released a statement that includes Polen and Alper's CO declarations, which we quote here:

“I don’t want my brothers, my sisters and the people that I love to be a part of that dirty war which has been implemented by the state. That war does not murder only men, but it murders women as well. For this reason, I am declaring my conscientious objection.” (Polen Ünlü)

“For the world where there is no war, no nation, no border; for freedom, I am listening to my heart and rejecting the military service. Let’s destroy militarism before militarism destroys all of us.” (Alper Sapan)