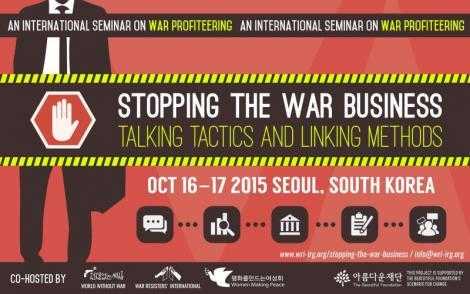 We live in a world where people profit from war. In 2014, Global military expenditure was estimated to be $1776 billion. Lockheed Martin - the world's biggest arms company - sold more than $45.6 billion worth of equipment. The war in Iraq wrenched open the country's economy to contractors of all shapes and sizes.

Arms companies profit from every bomb that falls, and every bullet that's fired. Through occupation, companies have the opportunity to exploit cheap land and lax labour laws. Conflict zones give fossil fuel giants access to new resources to exploit. Militarism means that research funding goes towards developing weapons of war, not finding solutions to global challenges like climate change.

All over the world, activists are resisting such war profiteering. Activists are asking questions at AGM's, researching the trade connections, suing companies who break the law, and taking direct action at arms factories and sales events. In a few months, we will be gathering in Seoul, South Korea, for the "Stopping the War Business" seminar, which will bring together activists from across the world to discuss the tactics and strategies they use to challenge war profiteers in their own context.

If you would like to come to the seminar, there is still time to register, and we've extended the deadline for registration to 13th August. Click here to register.