Stopping the War Business: seminar and actions in South Korea 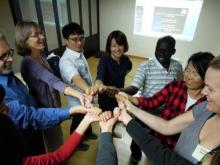 From 16th to the 19th October, activists from across the world were gathered in Seoul for the Stopping the War Business seminar, co-hosted by World Without War and War Resisters' International, which was followed by a training in nonviolent action, and a direct action designed to challenge the arms dealerswho had travelled to Seoul for the ADEX arms fair.

During the 'Stopping the War Business' seminar, we heard inspiring talks about ongoing resistance to war profiteering - from police militarisation and the companies that feed it in the USA, to civilian companies profiting from 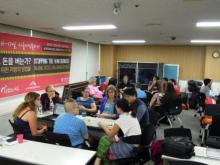 occupation in West Papua. We participated in workshops on different tactics we can use in the struggle to stop war profiteering, and in 'campaigns clinics', in which participants introduced campaigns they are involved in, and heard reflections and ideas from other activists.

It was a chance to make connections and plan future work together.

In the closing plenary, one participant commented "Sometimes you feel small working against such dark structures. Seeing the possibilities together gives us hope". Here is one talk given via Skype by Andrew Feinstein: an introduction to the global arms trade. 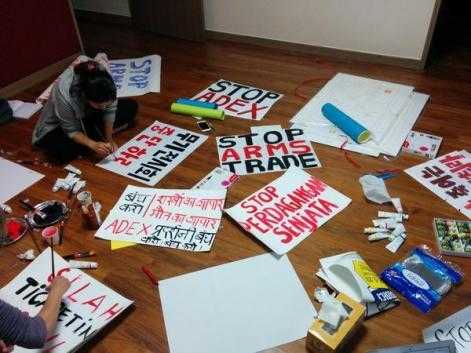 After the seminar, activists took part in training with trainers from World Without War, in preparation for nonviolent direct actions against the ADEX arms fair the following week. Together the activists planned what they would do to challenge the arms fair, painted banners, and had a legal briefing from the trainers.

After the Stopping the War Business seminar, WRI and World Without War activists took action to disrupt the welcome dinner for the ADEX arms fair in Seoul.

Inside the hotel that was hosting the dinner, activists held banners, chanted 'Stop Arms Trade', and flung money strewn with 'blood' on the ground. They were forceably removed by security, but caught the attention of over around 100 'VIPs', arms dealers and members of the military. 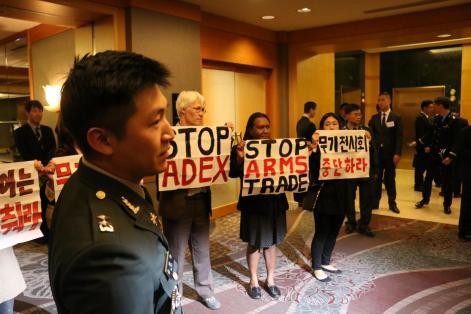 Outside, protesters held a rally, with speakers, songs, a die-in and a dance, in full view of the buses of arms dealers arriving for the dinner.