On 5th May 2014, peace activists made a stand in the very place where arms are promoted, in the heart of the European quarter in Brussels. Behind the walls of many grey office buildings, arms dealers are lobbying decision-makers. Behind a closed sliding door is the office of the AeroSpace and Defence Industries Association of Europe (ASD).

The activists had previously attended the action training 'I stop the arms trade'. They entered peacefully, took over the office and handed over letters of dismissal to the staff. The reason for the dismissals? Complicity in the killing machine of the arms trade. 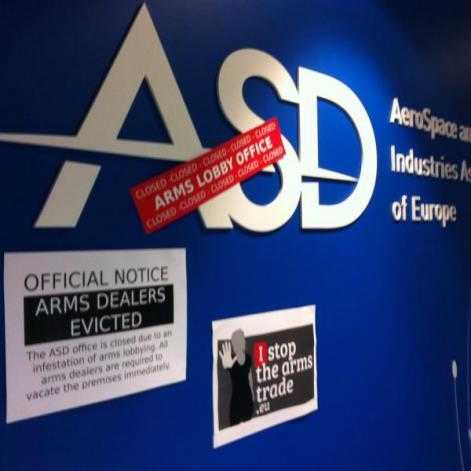 ASD is the voice of the defence industry in Europe. As an umbrella organisation, ASD represents the interests of 16 large European businesses and 27 interest groups from 20 countries. The executives of ASD are also the CEOs of Europe's biggest arms companies, including BAE Systems, Airbus, Finmeccanica, Thales, Rolls Royce, Safran, and Saab. In 2012, the turnover of the European arms industry was €96 billion. Almost €40 billion of this business was designated for export. The current head of ASD is Mauro Moretti, also the head of Finmeccanica. Via their affiliate AgustaWestland, Finmeccanica supplies fighter helicopters to regimes in Algeria, Libya, and Turkey.

ASD's main mission is to strengthen the European arms industry, by shaping EU legislation and policies as well as by securing public funding opportunities.

As the voice of the arms industry, ASD speaks with top politicians and civil servants inside and outside of European institutions, and with privileged access to the European institutions, ASD leaves its mark on EU policy. This was evident in 2009 with the creation of the 'Defence package': two European Directives which form one of the key pieces of EU legislation on the arms trade.

Since the 90’s, European defence companies have clustered to be able to compete with the American giants. Now a handful of large companies dominate the European defence sector. They see internal controls as an obstacle in the development and trade of arms systems. To simplify collaboration with affiliates in various countries, the arms industry pushed the European Union to deregulate. The Defence Package meets this demand of the arms industry: it simplifies arms trade within the EU. Due to the elimination of control at the borders between member states, weapons can now be exported worldwide via the European country with the least stringent export rules.

The 2009 Directives definitely made European arms export rules less strict. Export control continues to be a national domain, but responsibilities of governments and control mechanisms disappear along with weapons over national borders. The arms industry desperately needs an expansive trade of weapons to conflict regions in order to be profitable; that we are exporting a catalyst for violent conflict is an after-thought. For example, in 2011, the year of the Arab Spring, European arms export licences to the Arab region amounted to €9 billion, double the exports in 2007.

With the Defence Package, the arms industry got the 'harmonisation' that they were looking for. In their annual report, ASD congratulated themselves for their successful lobbying work.

Before they propose new legislation, the European Commission publishes a “green book” to seek comments from interested parties. In this way, ASD could already include their comments before any legislation was actually proposed. During the “collaborative procedure” that followed, ASD established a special committee to co-ordinate the lobbying efforts of the companies that they represent. The goal was to influence the discussions between the European Parliament and the Council. The icing on the cake was the 2008 speech by Ake Svensson, then president of ASD and CEO of Saab, to the European Parliament. Later, ASD monitored local implementations of the Directives and exerted pressure when necessary. In this whole process, ASD had a privileged position, from preliminary discussions, to editing of the policy texts, and even checking the implementation.

ASD lobbyists also exercise their influence in the domain of public financing for research. The arms industry develops ever more technically advanced weapon systems and subsystems, so they try to feed at the trough of public subsidies for scientific research.

By the letter of the law, European research money may not be used for the development of weapon technology. In practice, within the FP7-Security program, which ran from 2007 to 2013, €1.4 billion was available for “civil security research”. By embellishing their intentions, arms manufacturers managed to help themselves to a sizeable sum out of this research fund.

The current EU research program - Horizon 2020 - keeps this civil focus. But there's no objections to research of which the results can also be used to increase military capacity. So-called “dual-use products” can now be financed openly in this way, and the arms lobby is grinning like a hyena. 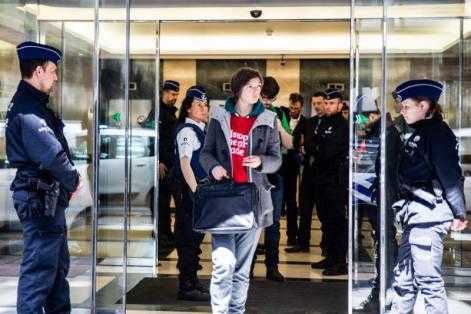 The European Commission is now preparing the next long-term budget, from 2020 to 2027. The arms industry is lobbying to make sure that the EU will directly and openly fund military research - and with success. The European Commission wants to launch a “preparatory action” to look into the added value of military research. At the European Council meeting in December 2013, while Vredesactie protested the further militarisation of the EU, the Council decided to set up a “high-level group of personalities” to study this. This “independent advisory council” has recently become active. Seven of seventeen members come straight from ASD's board or working groups, Which means Europe’s biggest arms suppliers are dictating policy again. Unfortunately, it is not new that industry is heavily over-represented in the expert groups designing policy. Critical voices are missing.

It is time to stop them

Behind closed doors, arms dealers meet decision-makers, lobby for less export control, and promote their weapons. With a bespoke policy for the benefit of the arms industry, European values have no meaning. Europe is one of the biggest arms exporters on earth. This creates problems - weapons are never neutral, they are used in bloody, violent conflicts. Weapons have no expiry date, and European weapons pop up in conflicts and increase insecurity worldwide.

On May 5th peace activists tried to stop the arms trade. They closed down the ASD office and handed over letters of dismissal to the employees. Business as usual was disturbed until the police intervened. This was only the beginning. Join us and stop the arms trade!

Istopthearmstrade.eu is a campaign by Vredesactie and Agir pour la Paix. We map the arms trade, expose arms dealers and intervene there where we can stop the arms trade. With our non-violent actions we prevent arms dealers from selling their weaponry or from lobbying for more lenient export regulations. We interfere during arms trade fairs, conferences, in the offices of arms lobby groups and other events related to the arms lobby.