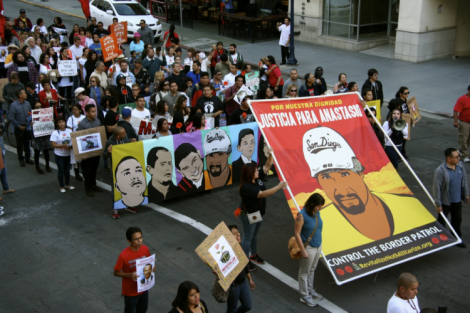 On May 28, 2015, in San Diego, California, hundreds gathered for an evening rally and march to commemorate the National Day of Action to Stop Border Brutality. The San Diego activity was part of a coordinated set of non-violent actions where organizations at nine cities across the United States convened various events to raise their voices against increased impunity by border agents who have been implicated in at least 39 deaths since 2010. Led by the Southern Border Communities Coalition, comprised of over 65 organizations working along the US-Mexico border, the coordinated rallies, marches, and film screenings also highlighted the 5th year anniversary of the death of Anastasio Hernandez Rojas, a father of five who in 2010 was tortured to death by over a dozen border agents at the San Ysidro Port-of-Entry in San Diego. 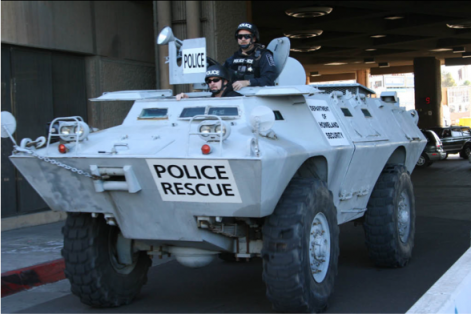 Coincidently, May 28 also marked the 91st anniversary since the US Border Patrol was established in 1924. Since its foundation, no documented case exists of any Border Patrol agent being held accountable for incidents where their actions have resulted in loss of life. In recent years, these incidents include the shooting of unarmed individuals, including minors, in their back, shooting across the border into Mexico, Tasering and beating people to death, and placing themselves in dangerous situations to justify the use of lethal force. In most cases, public scrutiny is adamantly discouraged or obstructed, allowing border agents to get away with murder.

The deaths of people at the hands of border agents is part of a larger historic and complex problem, one that involves a process by which communities along the US-Mexico divide have undergone a systemic militarization process, and that increasingly debilitates constitutional protections and exacerbates violations of human rights. The Migration Policy Institute found that as of January 2013, $187 billion has been spent on immigration enforcement since 1986. The Border Patrol has seen a quadrupling of its force since the 1990s, reaching over 21,000 agents, largely concentrated along the border with Mexico. Anyone driving through roads along the borderlands will be forced to drive through a Border Patrol checkpoint and questioned about their immigration status, sometimes beyond the 100-mile threshold that regulates where agents can operate.

The exaggerated build-up of enforcement resources designated for border communities follows an alarming trend whereby policies of war have defined border priorities for the US-Mexico border region. Irrespective of party affiliation, the war framework conveniently permits policymakers to scapegoat over 6 million people living in the States of California, Arizona, New Mexico, and Texas for their political and economic gain. Over the past four decades, the war framework has guided policy structures in the borderlands under Presidents Ronald Reagan, George H. W. Bush, Bill Clinton, George W. Bush, and Barack Obama. Often the policies include extensive coordination with the Department of Defense. Multi-agency taskforces have included formal agreements between local and federal law enforcement agencies, focused initially on drug interdiction programs and enforcement of immigration laws, but also that respond to the national security industrial complex. 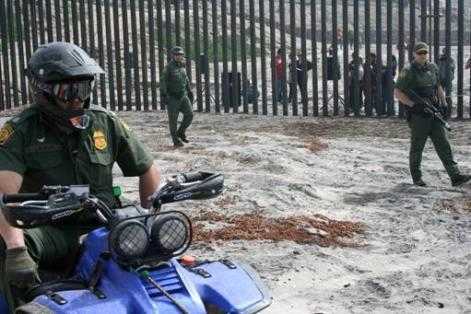 In the 1980s, President Reagan permitted modifying the Posse Comitatus statute by expanding the role of the US military in domestic affairs as part of the effort to combat the War on Drugs. In 1997, a platoon of Marines involved in a covert drug interdiction program shot and killed 18 year-old Esequiel Hernandez in Redford, Texas, one mile from the US-Mexico border. The four marines who stalked Esequiel before they shot him were never indicted for criminal conduct. In the aftermath of the grand jury investigation, documents revealed that every resident of Redford, Texas was considered a threat. It was during the Reagan years that border enforcement agencies acquired a surplus of military equipment, including magnetic ground sensors, infrared night-vision scopes, Javelin missile sights, Black Hawk and Huey helicopters, and Humvees.

In the 1990s, border and immigration policies capitalized on the War on Drugs by changing course and targeting lower-income communities in a “tough on crime” approach to social policy. Though crime rates were down in the 1990s, criminal penalties became increasingly punitive and promoted a “war on crime” outlook on immigration issues. California’s anti-immigrant Proposition 187 state ballot initiative, which sought to deny social, medical, and educational services to those “suspected” of being undocumented, galvanized hate groups that would hold “Light Up the Border” rallies along the border. Those crossing the border in search of jobs were deemed criminals, and responses from white supremacist organizations included a youth group dressed in military garb and armed with pellet guns that would “hunt for illegals” in the marshlands of the western-most edge of the San Diego border with Tijuana. 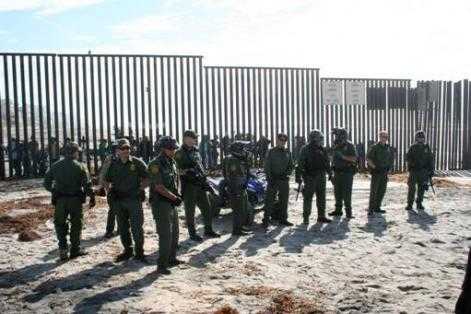 The anti-immigrant fervor in California went national and in 1996, President Clinton signed into law a retroactive and punitive immigration law that criminalized migrants. Two years prior, his Administration adopted border-wide militarization measures that sought to push migration flows into hostile mountainous and desert terrain. Consequently, since 1994, over 7000 men, women, and children have perished in the borderlands in their attempts to enter the US without inspection. The context for this is that the US liberalized trade under a neoliberal free-trade policy that destabilized local economies in Mexico, further generating conditions for people to migrate.

Following the September 11, 2001 attacks in the US, the “War on Terror” led to the creation of the Department of Homeland Security, and a new set of policies under a new mandate focused all of immigration enforcement priorities on preventing terrorist acts on US soil and interests. “Every migrant is a potential terrorist” was a common refrain from DHS spokespersons, and on-the-ground operations demonstrated a general disregard for civil rights protections, and a surge of interests in militarizing border communities even further.

Congress passed policies to erect hundreds of miles of border walls at the expense of dozens of labor, environmental, and civil rights regulations and treaties. Contracting agencies have included Boeing, and Northrop Grumman, Lockheed Martin, Raytheon, and General Dynamics have vied for contracts to construct border walls. The Israeli company Elbit Systems, responsible for building the apartheid wall in the occupied West Bank, was contracted by DHS for $145 million to erect surveillance systems to monitor crossings along the US-Mexico border. 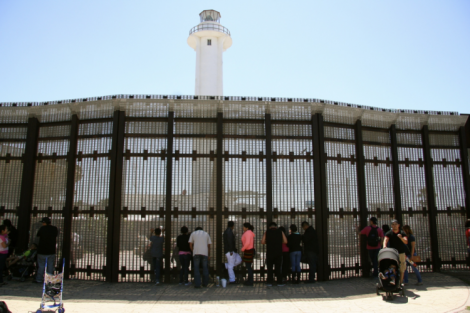 The panorama has not changed significantly under President Obama. Record deportations have already tarnished President Obama’s integrity on his commitment for favorable immigration policies. With over one thousand daily deportations, border enforcement priorities continue to focus on failed border policies that push people to remote areas where they succumb to the elements and die horribly. Many of these individuals were long-time US residents, despite not having proper immigration status. However, human rights organizations and communities along the US-Mexico border continue to shift the narrative with some advances. It is not as easy for policymakers to pass on as truth the tired and erroneous story that the border is open terrain for militarization projects. Border residents continue to organize, to demand justice, and to speak truth to power in courageous and creative ways, despite what at times might appear as an insurmountable challenge. Ultimately it is a vision for de-militarizing their communities what border residents strive for, where there dignity is respected and where basic human rights are upheld.

Pedro Rios is director of the American Friends Service Committee's US/Mexico Border Program, based in San Diego California. He oversees a program that documents abuses by law enforcement agencies and accompanies migrant families in organizing for self-determination. Pedro has published essays on how border militarization impacts border communities in various publications.