No choice on drones? 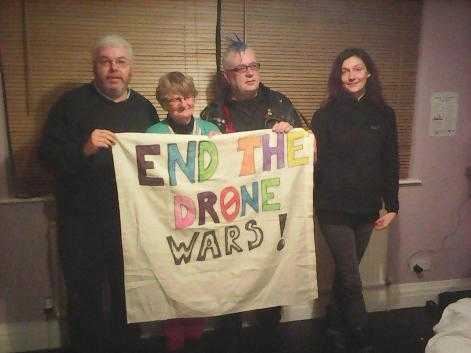 On January 5 I was part of a small group of four people that entered RAF Waddington, the home of UK drone warfare, to protest the growing use of armed drones. British RAF pilots began operating armed US Predator drones in Iraq just over ten years ago before the UK acquired its own Reaper drones in 2007 for use in Afghanistan. Since then UK pilots have launched hundreds of drone strikes in Afghanistan before returning to Iraq, in November 2014, to begin launching strikes there once again. Along with the US and Israel, the UK is a key proponent of the idea of remote ‘risk free’ warfare.

The four of us cut through the perimeter fence and then headed towards the hangar containing the Ground Control Stations in the middle of the base before we were detained after about 20 minutes. As has happened previously to protesters entering this home of drone warfare, we were held incommunicado while our houses were searched - goodness knows what they are looking for. After more than twelve hours we were charged with criminal damage and aggravated trespass before being released to begin the long court process.

Many may question the point of such a small scale piece of direct action that hardly disrupts the smooth running of the base, never mind the war. What is the point of going through all the hassle of courts, fines, bailiffs and even prison?  What possible difference does it make and in what way does it help the growing number of victims of drone warfare?  Isn’t it better to engage carefully and credibly with decision makers and the public on this issue rather than spend time blocking up the courts?

Well for me the answer to that is ‘no’. Don’t get me wrong I think campaigning in all its various forms is very important. For example I’ve spoke at countless public meetings on drones up and down the UK over the past five years, as well as engaging with the press and media more times than I can remember. I’ve also written thousands of words in newsletter, magazines, briefings and on websites and I have met with many MPs, peers and military officials on the issue. I’ve taken part in more vigils, protests and demonstrations that I can possibly remember, but I believe it’s also crucial to engage in nonviolent direct action as well.

For me nonviolent direct action (as well as the court and prison witness that follows) is about helping to make visible the choices that we are making – or that are being made on our behalf – and articulating the fact that there is an alternative.  A classic example of this nonviolent direct confrontation would be Rosa Parks’ refusal to give up her bus seat to a white man in 1955. That direct confrontation with the power of institutional racism in a concrete situation produced a wider circumstance of choice – the Montgomery Bus Boycott – where people had to choose to side with the power (a power which insisted that there was no choice, this is just the way things are and always will be) or to stand against racism and on the side of equality and life.

In a similar way today, the powers that be tell us that we have no choice with regard threat from Saddam, Gaddafi, Taliban, Bin Laden, Al Qaeda, ISIS (whoever is the latest evil threat) other than the growing use of armed drones. The only realistic way to achieve peace and security,  they say, is through the gun, the drone and the nuclear deterrent. “It’s the way things are and always will be ” is the cry, and I have heard it from school boys in the classroom, from CEO’s in the boardroom, and politicians in the parliamentary committee room.  The powers have managed to convince us that armed force is our salvation, that in the drone we must trust.

But of course, that is nonsense. As we have seen clearly over the past twenty years of war in Iraq, Libya, Pakistan and Afghanistan armed force does not bring peace and security, just the opposite in fact. The reality is that only by tackling the root causes of injustice around the world - like the situation of Palestine for example - will we really address some of the real drivers of insecurity in the world. Instead of pouring resources into more lethal ways to kill each other, we need to be addressing global inequality by devoting resources to achieving the Millennium Development Goals and helping to achieve political and economic rights for all. Perhaps most importantly of all, we need to be educating our fellow citizens to understand that our security depends on global welfare and common security rather than on narrow self-interest and national prosperity.

So I will return with my friends to the courts in a few weeks . Cynics may say of course that it is a waste of time.  Our direct action at RAF Waddington did not end drone warfare or indeed stop it at all. But for me, the lie that is ‘this is just the way things are and always will be’ - the pretense that this normal and there are no alternatives, was exposed.  MPs, members of the public, security guards, court officials, passers-by, friends, neighbours and readers of this very article all know that we have a choice to make:  to choose to support on the one hand, the on-going drone wars, the way of violence, national self-interest, militarism, injustice, or on the other community, justice and the common good.