The coming week is the 2nd International Week of Action Against the Militarisation of Youth where youth groups and activists from different countries will be taking actions against the many ways militaries engage with the young and militarise our public spaces.

Join us this November and stand against the militarisation of youth with many others all around the world. Your voice, your nonviolent actions and events will contribute to our growing international movement!

10th November: Subash Kattel from Nepal gives a talk on countering youth militarisation in Nepal in an event jointly organised by The Community Self Reliance Center and National Land Rights Forum in Kathmandu.

12th November: Al Scorch and the Country Soul Ensemble performs "Poverty Draft" in their show at the University of Wisconsin, USA.

14th November: Conscientious Objection Association in Turkey organises a workshop on conscientious objection and youth resistance against war in Izmir/Turkey.

14th-15th November: A group of activist in Bolivia will organise events on youth militarisation and conscientious objection, happening the same time with the 'Armed Forces Week' in the country.

14th – 20th November: The National Network Opposing the Militarization of Youth (NNOMY) convenes A National Call: Save Our Civilian Public Education, a call to action to demilitarize schools in the USA.

16th-20th November: Aseistakieltäytyjäliitto AKL from Finland circulates anti-recruitment material in front of the military recruitment of 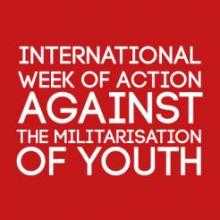 17th November: Youth Activists Youth Allies (YA-YA) Network from the USA organises a workshop on anti-recruitment for the young in New York/USA

18th November: Women in Black (London) leads a vigil on youth militarisation, handing out leaflets to members of the public in central London.

20th November: Beyond the Fence- a Radio Show in the Pacific Island of Guam, dedicates its episode on 20th November to the week of action against the militarisation of youth and discusses issues around countering youth militarisation in Guam

20th/21st November: A group of activists organises a protest against the military recruitment at the job fair azubi-und-studientage in Frankfurt/M / Germany.

In Barcelona there will be symbolic street actions, and the Catalan group Desmilitaritzem l’Educació are twitter storming using #YouthAgainstWar

ForcesWatch (based in the UK) will publicise a report on peace education in the UKreet actions, and the Catalan group Desmilitaritzem l’Educació are twitter storming using #YouthAgainstWar

Students from the University of York (UK) will do information stalls in their campuses.

The National Centre for Peace and Conflict Studies at the University of Otago (New Zeland) supports the week via their social media campaigning . A Phd student from the Centre publishes a blog on the youth resistance against the US militarism in the Pacific islands of the Marianas.

Activists in Sweden will hold public meetings focusing on the sexual and racial dynamics of youth militarisation for minorities in Sweden.