How is power being exercised through the Apartheid wall in Palestine?

The militarization of borders has occurred since ancient times, and locating 'political' frontiers has been a necessary condition all along, for instance, The Great Wall of China, of which Emperor Qin Shi Huang started its earlier sections In 220 BC as a defensible wall against Northern invasions. In the modern era, we can find several examples of militarized borders, such as the Pakistan / India borders, USA / Mexico, and 'Israel' / Palestine. Actually the obsession with 'frontiers' has developed to an extent that we can now even find 'autonomous' agencies whose aim is managing the cooperation with foreign borders guards, including questions of illegal immigration, human trafficking and 'terrorist infiltration', such as "FRONTEX", the EU border agency, which was established in 2004 (FRONTEX, 2007). In this article, however, I will discuss the Apartheid wall in Palestine.

The work on the wall started in 2002,though the idea of separating the 'Israelis' from the Palestinians arose in 1992, when Yitzhak Rabin, who had suggested this idea before he won the election for Israel's Prime Minister. So far, the construction has cost 3 billion US dollars and is considered as one of the most expensive projects in the history of 'Israel'. The Ministry of defense was put in charge of the project together with the Department Of Regional and Strategic Planning. The 'Israeli' government argued that the "The Security Fence", as they call it, "is being built with the sole purpose of saving the lives of the 'Israeli' citizens who continue to be targeted by the terrorist campaign that began in 2000." (MOD, 2004) The length of the wall is 832 km, which is double the length of the Green Line (the agreed borders of 1967). See figure 3. The wall barely follows this line, to an extent that actually only 6% of the wall will be within 100 meters of the 1967 borders. Figures 1 & 2 shows the wall and barrier sections. 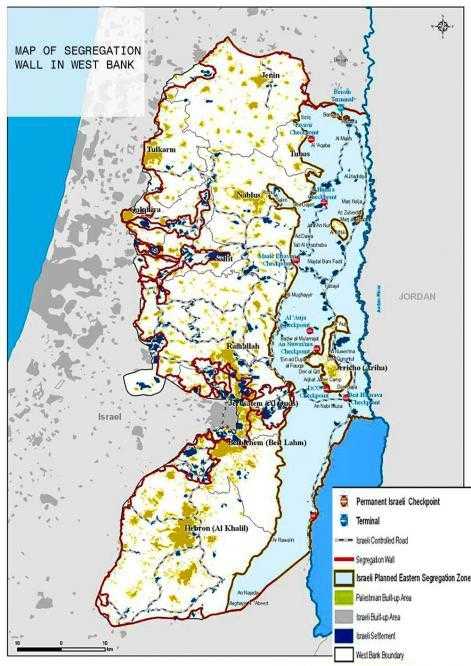 Michel Foucault's lectures on "Security, Territory, Population" (1977-1978) will serve me in this partin this part to analyze the political strategies of power at the segregation wall and borders in general. However, Foucault defined three types of power, that can be applied on multiple phenomena:- sovereignty, discipline, and "bio-power".

Foucault in his lectures explained that sovereignty1in the classical ages meant mainly to have control over land. ''Sovereignty" as Foucault said, creates a "territorial pact, and guaranteeing borders is the major function of it". Foucault in addition to that explained that sovereign power is "exercised within the borders of a territory." (Foucault, 2009)Hence, erecting militarized borders, does clarify and strengthen the territorial identity/body of any new state in specific and any state in general. In Palestine, the total area of the West Bank is 5,640 km², the Israeli wall acquired 724 km² of these, totaling the area of Palestinian land losses at 1864 km² (33% of the area of the West Bank) (Lands and tenures research center, 2014), because the 'Israeli' wall, settlers by-pass roads, security-closed areas, and the 200m wide security barrier after the wall on the Palestinian side. Frantz Fanon once said that "For a colonized people the most essential value...is first and foremost the land: the land which will bring them bread and, above all, dignity.” (Fanon, 1963) The land and geographical contiguity of territory is not available for the Palestinian state (Figure 3 & figure 5)the Palestinian lands are floating among the C areas 'Israeli' lands like islands, not to mention the geographical disruption between West bank and Gaza, which makes it impossible to build a Palestinian state in the current situation.

DISCIPLINE
Foucault talked about "discipline and punish" as a ceremony of sovereignty, He explained that discipline is just one way of many other ways that power can be exercised. Foucault illustrated that discipline mechanism means the society is being watched all the time by surveillance methods, and the behavior of the society is being corrected by police for example. (O'Farrell, 2007) sovereignty cannot be acquired only by erecting a concrete wall and, here lies the importance of discipline and surveillance which is exercised by CCTV cameras, radar stations, Aerial systems, smart sensors and extremely light-flooded areascombined with the concrete wall/electrified fences, patrol roads and deep trenches, (figure 1&2) making the whole-picture of a live prison, and a willful 'criminalization' of an entire nation behind its walls (figure 4). Any 'infiltrator' or farmer is threatened with shooting or arrest, accusing them of approaching the barrier, not to mention the ecological, environmental, economical, educational and agricultural discipline. According to the World Bank, agriculture generates 8% of the overall Palestinian income (B'tselem, 2011). However, the Wall at least doubled the cost and the length of travel time for farmers to reach their lands, with the result, the income from agriculture is extremely insufficient. (Abu-Eisheh, 2004)

Figure 4: An Israeli Warning near the wall. (Electronic intifada, 2003 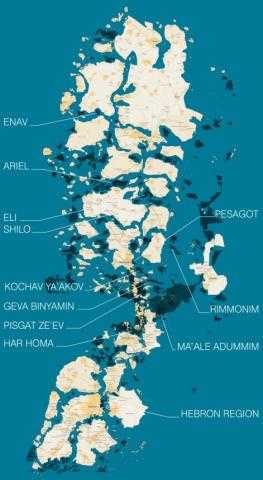 The environmental effects which result from the wall, include the deterioration of water quality, depletion of natural resources, land degradation, air and noise pollution, deterioration of nature, biodiversity, landscape and aesthetic distortion, and extreme threats to the cultural and historical heritage.

OpenEi.org defines "Bio-power" as a term to the practice of modern nation states and their regulation of subjects through "an explosion of numerous and diverse techniques for achieving the subjugations of bodies and the control of populations ". Simply, Bio-power is a way that someone can exert complete and total power over someone else. Foucault gave historical examples of 'bio-power', the treatment of leprosy, plague, and smallpox and apparatuses of security and disciplinary mechanisms that were used (Foucault, 2009), for instance, medical quarantine of villages and towns, and the treatment of mental illness, and the problem of asylums. He explained how a group of (doctors, psychiatric, military force...etc) put themselves in a socially higher positions, allowing them to imprison or isolate a group of people, insisting that this group of people deserves being trapped like mice. Concerning the Palestinian case, the wall is trapping 89.5% of the Palestinians in it for 'security reasons', whilst simultaneously annexing 88.6% of settlers on the 'Israeli' side of the wall! This is a powerful way to express how the wall is snaking through Palestinian land to annex settlements and regulating bodies on a radicalized basis. (palst-jp.com, 2004)At the time of finishing the wall approximately 249,000 Palestinians will be living isolated between the Wall and the Green Line and 20,000 of them are living in the “closed zone.” (palst-jp.com, 2004)
At the same time, the West Bank in general is surrounded by the security 'fence' transferring the historical Palestine of 27,000 km2 to small disconnected islands of agglomerations.

The three types of power that we talked about, territorial power, discipline power and biopower can be applied to any oppressed social class, gender, race, religious minority. Every oppressing power sets a "binary division" as Foucault said, between the oppressed and the oppressors, between who is included and who is excluded. The settler-colonization in Palestine uses the Apartheid wall as a major tool to construct a hegemonic network, trapping the Palestinians in it. However, as Foucault said: “At the very heart of the power relationship, and constantly provoking it, are the recalcitrance of the will and the intransigence of freedom” (DREYFUS & RABINOW, 1982).

Adele Jarrar is currently in her 5th year of study in the Architectural Engineering Program at Birzeit University in Palestine. She is also an intern at Birzeit University museum, as an art director assistant. She assisted in "Ramallah, 66" and "introduction to research" exhibitions. Adele has recently participated in the "ICCG 2015" seventh International Conference of Critical Geography which was held in Ramallah. She is interested in geopolitics, war studies, and urban borders. Can be reached on adelejarrar@gmail.com

1 A state; the authority of a state to govern itself or another state. Foucault said that sovereignty of the king in the classical ages, developed to the modern governments which consisted of police and institutions.

Abu-Eisheh, S., 2004. The Impacts of the Segregation Wall‏ ‏on the Sustainability of ‎Transportation Systems and Services in the Palestinian ‎Territories. 18(2, 2014).