Once again we collect the stories for CO-Update, and once again we see small steps towards the recognition of the right to conscientious objection in some countries, as others fall prey to greater militarisation. Despite significant steps forward in favour of CO's Colombia, we see the ongoing need for resistance to militarism. Similarly, despite recognition of the right to CO in Belarus, CO's continue to fear conscription.

In Turkey, the HDP party have suggested laws that recognise the right to conscientious objection, but this comes at the same time as the tragic news of the death of two CO's as they prepare to travel to Kobane to help with the reconstruction work there. In early September, CO's from across the Mediterranean region gathered to discuss various aspects of conscientious objection. A report from the meeting can be found on the WRI website here.

In Ukraine we read of the military preparing more recruitment waves as it struggles to fill it's forces, while activists create tools and resources to help people to avoid recruitment - at the same time, the high court has affirmed the right to conscientious objection. Similarly, the Syrian army is struggling with recruitment, and the state has just initiated an amnesty for those who have previously evaded the draft. In South Africa, we read of rumours that the government could reintroduce conscription, lured by the belief that a more militarised society helps with unemployment, discipline and patriotism. From Kyrgyzstan we hear news of how some small steps towards the recognition of CO, with some religious groups rejection of war being recognised. 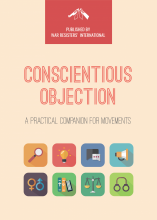 One of WRI's important roles is to produce resources that support our movements to grow stronger and more effective - over the lats year, members of the network have contributed to a new publication called "Conscientious Objection: a practical guide for movements". We are currently raising funds via a crowdfunder to pay for the printing. Please support the final steps in getting this important resource into the hands of pacifists and anti-militarists internationally by contributing to the crowdfunding campaign, and sharing it with your contacts.