Campaign of the Month - Shifting priorities: from arms to renewables

Andrew Smith of Campaign Against Arms Trade (CAAT) in the UK reflects on new research that shows a shift in priorities from militarism to green energy would create a safer, better world and hundreds of thousands of new jobs.

Imagine if the government put peace and social justice ahead of militarism and war? What would happen if the level of resources currently being put into promoting military might were used to make the world a better place?

This year alone, the UK will spend £37 billion on arms and the military. What if a similar figure was invested in pr 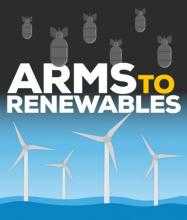 omoting social and environmental justice and creating jobs in the renewable sector?

It seems like such an obvious solution, especially at a time when there is a severe skills shortage in Science, Technology, Engineering and Maths. The ongoing lack of support and investment is already leading to missed opportunities. At present only 25% of the parts that make up UK wind turbines are actually made in this country, with three quarters being imported. This means we are missing out on large numbers of supply chain jobs.

However, at present the British government spends 25 times more on Research & Development (R&D) for the military (£1.46 billion) as it does on R&D for renewable energy (£58.6 million).

Every year, British taxpayers subsidise arms companiesto the tune of hundreds of millions of pounds to export their wares into war zones and to arm oppressive regimes around the world. These weapons don't just provide military support, they provide political support too, and give a sign of UK support for atrocities taking place across the world.

Meanwhile, at home, billions of pounds are being spent on bloated procurement projects and military technology we do not need, like the Trident nuclear weapons system and aircraft carriers. BAE Systems, for example, has long-term contracts that guaranteea minimum income of £230 million per year from the public purse. All the while, vital public services that we all rely on are being cut.

The government justifies its support for the arms trade by arguing it needs to protect high skilled manufacturing jobs. However, despite all of these resources, and despite the deep well of government support, the number of jobs in the arms trade is on a long-term decline that doesn't look like changing any time soon. The prospects for the industry have been described by a former President of it's own trade body as “flat-lining at best.”

We believe there is an alternative.

These would be better jobs for the workers and for all of us: jobs in an industry which is growing not declining, which create a safer, rather than a more dangerous world. With fewer people personally involved in the arms industry then we may also see public attitudes begin to shift away from militarism and conflict.

The transition could be made without any large scale job losses. Like the arms trade, the renewable energy sector is highly skilled, and actually has a very similar breakdown across broad categories of skill levels and employ many of the same branches of engineering. There would also be appropriate work available in most areas where arms workers are located, with tens of thousand of supply chain jobs that could be located anywhere in the country.

By changing directions the UK can take a leading position in technologies that will be in high demand, will have major export potential and will also help other countries cut their carbon emissions. Shifting priorities would secure green jobs for the future and improve human security rather than threaten it.But this potential won’t be realised without action.

What we are arguing for may be a big change, but if we are to counter climate change then it is a crucial one. It wouldn't happen overnight and would need a significant investment and concerted government support to at the level currently devoted to the arms industry. It will also need highly-skilled engineers – like those currently working for arms companies.

But more than that it will need a constant grass roots pressure and a contribution from all of us if we are to make the British government shift priorities, create more and better jobs, and build a safer world for all.