Call to Action Against the NATO exercise "Trident Juncture 2015" 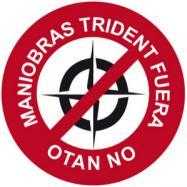 The NATO exercise Trident Juncture will take place during October 2015 until 6 November, principally in Italy, Portugal, and the State of Spain. With the participation of more than 36,000 soldiers from 30 countries, the exercise will be “the Alliance’s most important exercise in 2015” and “the largest deployment of the Alliance since the Cold War and in the last decade”, according to the Spanish Ministry of Defence. More than half of this military force, 20,000 soldiers, will be deployed at eight sites in the State of Spain: the National Training Centres of San Gregorio (Zaragoza) and Chinchilla (Albacete), the Exercise and Firing Range ‘Álvarez de Sotomayor’ (Almería) and the Amphibian Training Range of the Sierra del Retín (Cádiz), and as well in the areas of the military bases of Albacete, Son San Joan (Palma de Mallorca), Torrejón and Zaragoza. Additionally, the US marines from the base of Morón de la Frontera will participate in the "mega exercise".

The exercise consists of two distinct phases: a command post exercise and “simularted war” (CPX, from 3 until 16 October) which will take place within the barracks of participating states, and a live phase (LIVEX, 21 October-6 November), during which different naval, aerial, terrestrial offensive operations, amphibian landing operations, parachute jumps, urban actions, interventions in a CRBN (chemical, radiological, biological, and nuclear) environment, and actions of special operations forces will be trained. In the State of Spain the main part of the military will be deployed at San Gregorio (Zaragoza), but Andalucía will also have an important role during the exercises. At the moment a large camp is already being constructed in the airbase of Zaragoza with a capacity for 1,600 soldiers.

With this exercise NATO puts into practice the lessons learned from the war and occupation of Afghanistan, and will practice to intervene militarily in the North of Africa with a massive power ready to invade. They will be trained in how to achieve control of natural resources – water, minerals, oil and gas – in a context of major environmental degradation and scarcity of energy. NATO is interested in Africa because of the conflict potential of climate change and because the continent is rich of abundant natural resources: minerals (platinum, chromium, magnesium and cobalt, among others), as well as oil and gas which represent an important part of global reserves.

In the power game over Africa the State of Spain has an important role, inlcuding maintaining the safety of the transport routes (Red Sea and the Horn of Africa) and additionally has its own military and economic interests. For this reason the great majority of the military interventions of the State of Spain take place on the continent, or in the Middle East. Spain is responsible for the control of the “Southern frontier” of the European Union, for the containment of the migration of people who flee from poverty or war, guaranteeing that the consequences of the politics of exploitation of the continent do not have repercussions within “Fortress Europe”. The State of Spain represents the spearhead of NATO in Africa.

But NATO's exercises are also designed to send a powerful message of pressure to Russia with a partial or indirect war in its bordering territories. In this sense the participation of Ukraine – which formally is not a member state of the Alliance – is significant. Trident Juncture not only serves to demonstrate to Russia the military capacity (and the will) of NATO, but also serves to train the cooperation with the Ukrainian Armed Forces. However, the principal message is not for Russia, and much less for the Islamic State, Al Queida or others whose existence and armed actions are used as a justification and propaganda for war. It is more likely that the main message might be for China, a country with strong economic and geo-strategic interests in Africa. China is investing in many African countries and is constructing infrastructure to secure for itself the natural resources – above all, the minerals – of the continent. To restrain the expansion of China - the main competitor of the member states of the Atlantic Alliance - in Africa is one of the hidden motives of the “mega exercise”. All this is part of the imperialist competition between the military powers and their dependency on the commercial interests of the multinational companies.

The exercise Trident Juncture only protects a privileged minority and increases global military spending, which is a detriment to investment in social and humanitarian needs such as combating the dramatic consequences of the crisis of capitalism, putting a break on environmental degradation, promoting just trade relations, economic solidarity and cooperation for a global development of our planet. In 2014 global military spending was 1.8 trillion dollars, while in 2016 the State of Spain will spend 24,489.96 million on the preparation for war and social control. At present the five states with the highest military expenditure of Western Europe are France, the United Kingdom, Germany and the Kingdom of Spain.

Their “mega-exercise” increases insecurity on our planet and especially our insecurity as it turns us into the main stage for their war operations. They are bringing the war to our homes, they turn us into direct collaborators with the violence of NATO, and, therefore, into the war targets of their opponents. They encourage terrorism, social division, racism and fear.

These exercises, and Armed Forces generally, represent a bloody burden for global progress and are means of irrational destruction, economic and ideological domination and of the “conquest of power” of those whom we need to free ourselves for the good of humanity and of Earth. For these reasons, and because of their significance, we make a call for global solidarity and for the cooperation of societies in the struggle of active nonviolence for real democracy, social and environmental justice and for the sustainable redistribution of the wealth and esources of the planet. We call for civil disobedience and nonviolent direct action against the NATO exercise Trident Juncture 2015.

Various collectives are preparing protest actions and civil resistance during the course of the “mega exercise”, for which we ask for your support and cooperation. We also invite everyone to decentralise and self-organise the protest (organising your own disobedient action and coordinate it with others). There are initiatives by the pacifist and antimilitarist movement of Andalucía to organise civil disobedience action in Barbate (Amphibian Training Range of the Sierra del Retín ) with the support of Alternativa Antimilitarista.MOC on the level of the State of Spain and of the European Antimilitarist Network. In Zaragoza we are organising acts of protest from 3 to 6 November (the National Training Centre of San Gregorio will again be the protagonist of this militarist barbarity). It is high time to demonstrate our rejection of war and of the new threat of NATO. The people have the power and the responsibility to stop this greed and the violence, to improve our fragile and small world

More information which will be regularly updated is available on the website “Insumissia” (antimilitaristas.org), section “Maniobras OTAN «Trident Juncture» 2015”. Short link to the section (in Spanish): http://j.mp/AntimilOTAN