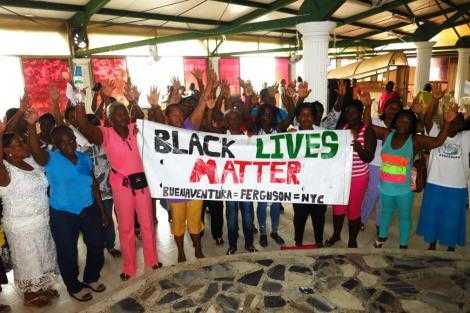 As thousands across the United States emptied into the streets demanding an end to police brutality and state violence in the wake of a grand jury decision not to indict Darren Wilson in late November, a group of twenty-two black women from northern Cauca in Colombia were marching on foot to the nation’s capital of Bogotá to assert that black lives also matter in Colombia. Arriving to Bogotá on November 27, these women were marching hundreds of miles from their historic gold-mining community of La Toma to speak against the violence and destruction caused by the explosion of illegal, large-scale gold-mining projects controlled by national and transnational corporations and protected by paramilitaries who continuously threaten the women and their families. Since 2009, these companies have illegally entered La Toma without the permission required by the prior consultations, or consultas previas, a legal mechanism guaranteed by the 1991 Colombian constitution requiring that communities in historically ancestral communities like La Toma must approve of any interventions into their territories. Yet, despite the law, constant protests, and multiple commissions, these companies and paramilitaries continue to function without impunity in Cauca. That’s why as of November 27, 5PM, these twenty-two women have been occupying the offices of the Ministry of the Interior until their demands—all ten of them—are met.

“Our Love for Life is Greater Than Our Fear of Death”

Nestled atop rolling green hills and valleys in the southwestern department of Cauca, La Toma, like many towns across Colombia, was built with blood and perseverance. Enslaved Africans were brought to what became La Toma in the early 1600s to mine gold in the mountains and river streams in service of the growing Spanish empire in the so-called “New World.” In 1636, La Toma was officially established by slaves and runaways, becoming one among many “free towns” and maroons that emerged across the African Diaspora. For centuries, these communities supported their families through artisanal mining, agricultural production, and fishing. Like their ancestors, these women and their families are committed to artisanal mining production, refusing to use contaminating substances such as mercury or other toxic materials, whose use transforms clear water streams into gray masses (which I saw for myself in the Pacific coastal department of Chocó) with multiple life threatening consequences.

This way of life in Cauca, however, dramatically shifted in the early 2000s, when the Colombian government under rightwing, neoliberal President Álvaro Uribe began to grant mining concessions to domestic and multinational companies without the consultation of its residents. And, as throughout Colombia, the paramilitaries arrived with the companies, who began to terrorize Cauca’s communities, including one infamous massacre in 2001 in the Alta Naya, not too far from La Toma, where hundreds were murdered and disappeared, and thousands of families were displaced. Acquiring land through terror, these companies began to expand their gold-mining operations over the years, seeking new spaces of exploitation and aided by paramilitaries such as Aguilas Negras (Black Eagles) and the Rastrojos, who were previously part of the criminal paramilitary organization AUC (United Self-Defense Forces of Colombia), who regrouped after the failed demobilization processes of the early 2000s. In October 2009, La Toma would be targeted.

As a historic, black ancestral community, a prior consultation, as mandated by Article 330 of the 1991 Colombian Constitution, of La Toma’s community was necessary before any concessions could be granted. Yet, in October 2009, villagers received notice that their community would be evicted because a man named Hector Saria had acquired mining concessions to La Toma in 2000. According to Saria, he was awarded the concessions because no historic, Afro-Colombian communities, otherwise protected by Article 330, had been registered. Fortunately, the Constitutional Court legally recognized La Toma as a historically, black community in December 2010, requiring the necessary protection of prior consultation and making any intrusion into La Toma illegal. However, despite this victory, companies like the South African-based AngloGold Ashanti continued to operate with heavy machinery illegally in La Toma’s communities, aided by paramilitaries like Black Eagles who have launched multiple death threats on leaders of La Toma (and most recently, Black Eagles has threatened journalists of teleSUR in Colombia as well). “We want to live without the fear caused by the machine owners that send us notes saying that they know when our daughters and sons leave school,” stated one of the communiqués by these women in late November.

In defense of life and territory, and after the failure of the Constitutional Court’s sentence, multiple protection measures, denouncements, and visits by international commissions, the twenty-two women of La Toma decided that, in the chilling last words of Eric Garner, an African-American man recently murdered by the New York Police Department, “it stops today.” Singing, chanting, and dancing on the streets on their way to the capital, accompanied and protected by their sons and daughters who form the Guardia Cimarrona, or the Maroon Guard, these women and their families have shown a remarkable spirit of courage and perseverance. “Our love for life is greater than our fear of death,” stated the women in their fifth public communiqué. On the way to Bogotá, on November 22, the women met with members of the Socio-Environmental Youth Collective of Cajamarca, who are also resisting a public-private project initiated by AngloGold Ashanti to build one of the largest open-air mining enterprises in Latin America there. While in Cajamarca, many of the youth and supporters of the women were stopped and frisked by the Colombian police and military that said they arrived there simply to “mess with things.”

Occupying the Ministry of the Interior since November 27, the women refuse to leave the office until their ten demands are met. These demands include the immediate confiscation and destruction of heavy machinery in various municipalities of northern Cauca, reparations for the environmental damages to their food sovereignty as a result of illegal mining, guarantees for the protection of the lives of their leaders and families, the revocation of illegal mining concessions and recognition of ancestral mining in their historic communities, and direct communication between these women and those overseeing the peace negotiations in Havana “because peace without free territories is not Peace.” At first threatened with eviction by ESMAD, Colombia’s notorious riot police, the women will occupy the office until agreements are signed and working groups are formed with concrete objectives.

“We are in a permanent assembly because we are part of the solution,” Charo Minas Rojas of the Black Communities’ Process International Working Group told me. “We didn’t come here with new agreements or new proposals, we came so that those agreements promised by the institutions would be fulfilled, and we’re here because their failure to fulfill them has turned into threats and the risks for our lives have increased.” Indeed, it is crucial that the Colombian and international public recognize and support the struggle of these twenty-two women who are risking their and their families’ lives to live a dignified and peaceful life in their homes. The public must hold President Santos and those under him (and before him) accountable for not fulfilling their duties and protecting the constitutional rights of these ancestral communities like La Toma. Yet, if Santos’s previous comments on prior consultations are any indication—he referred to them as a “very perverse instrument to delay the progress of the country” in August 2013—it will undoubtedly be a struggle.

But these women, like their ancestors before them, know struggle all too well. And their resilient example shows us the struggle for black life, too, lives on in Colombia.

Yesenia Barragan is a PhD Candidate in Latin American History at Columbia University and longtime Colombia solidarity activist. Based out of NYC, she is the author of Selling Our Death Masks: Cash-for-Gold in the Age of Austerity on Zero Books.