The 3,169 km of the US-Mexico border line has become an insurmountable, heavily militarised and controlled barrier. The deployment of security forces, border controls and weaponry is very similar to that of two countries in a state of armed tension. There is not a single section of this boundary that is free of steel fences, surveillance cameras, blackhawk helicopters, Predator drones; or border patrol, immigration and customs protection officers, whose presence has doubled in the last six years to reach 25,000 agents.

Every year the militarisation of the border increases. In 2014 the US government approved the deployment of up to 1,000 officers of the National Guard, that functions as a state militia, especially in the area of the Rio Grande, the natural barrier that marks the division between the two countries. The decision is justified by the government of the United States on the ground of the necessity to fight drug trafficking.

This year the governor of Texas, Greg Abbott, approved a new law that embedded this military component. The HB11 law has led to an increased control of the area, with an intended budget of up to 800 million dollars for training and for the purchase of technology and equipment.

These conditions have raised strong protests from the government of Mexico, bolstering international tensions aside from the social impact for communities on both sides of the barrier that see their homes and their streets turned into increasingly militarised zones.

What is going on along the US border with Mexico for such control measures to take place?

The answer goes beyond the concept of security issued by the states, the fight against drugs or the control of migration flows. To understand the role of the barrier it is necessary to deepen our understanding of the social situation on both sides of the border and beyond it, as well as its raison d'etre as a dam for contention and for maintaining the status quo through the use of force. 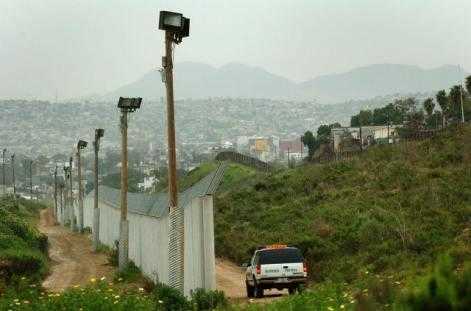 The figures of the Human Development Index for regions separated only by few kilometres throughout the border tells us a lot about the situation in both countries. According to the Human Development Report published by the Development Programme of the United Nations, the regions of the US side neighbouring the barrier have the lowest HDI of the country, which, nevertheless, turns out to be higher than across regions on the other side, which have the highest HDI of Mexico. That is to say, that while turning away from the barrier on one side promises improvements for the development of the person, on the other side it promises more precariousness. This not only serves to explain the evident direction of the migration flows, but also, the way in which the barrier establishes a model of social and political relations in between the North and the South, according to the economic interest necessary for the survival of the neoliberal and capitalist state (Source: UNDP, 2009. http://hdr.undp.org/sites/default/files/reports/269/hdr_2009_en_complete.pdf).

These relationships become evident along the Mexican border through the massive growth of job insecurity that is fed by the flow of immigrants from the southern parts of the country. In the region we can witness the presence of maquiladoras (assembly centres that produce export products in which cheap labour is the common rule), almost non-existent taxes and very lax authorities in charge of implementing the laws that protect labour rights. All this just a few kilometres from the major world power.

Established in Mexico since the 1960s, the maquiladoras are expanding strongly since the late twentieth and in the early twenty-first century, mainly to satisfy the cheap labour needed to meet the free trade agreement between the US and Mexico (NAFTA), which came into force in 1994. With this trade agreement US multinationals can transfer their production to Mexican maquiladoras.

The workers in a maquiladora live in a state of absolute insecurity and necessity, with a salary that barely reaches 45 euros per week, 80% of them have no union and labour rights are almost non-existent.

Thus, the relationship is established in three ways: 1) job insecurity and cheaper labour to meet the expansive targets of US production, 2) economic and social dependence of Mexico to its neighbour, so that if production falls, as happened due to the recent economic crisis, unemployment multiplies. And 3) containment through a highly militarised barrier that keeps the precariousness away from the reach of stricter laws and regulations.

Nation states build walls around their frontiers to protect themselves against excessive border liberalism. From the neoliberal perspective, poverty is criminalised, in this case, in the form of immigration, that is seen as a threat to the more developed countries, as a force capable of generating collapse and conflicts. And that is why the need to invest millions of dollars to gain control, always by the use of force, while, on the other hand, the flow of capital has no barriers and is legally established by agreements that reproduce poverty.

The militarised border situation creates a humanitarian apartheid scenario that is not unique to this geographical area, where in just a few kilometres two realities, that at the same time feed and repel each other, converge. The neoliberal state needs the existence of precariousness, but always under its control, and, if possible, beyond its geographical scope.

Countries reproduce their borders the same kind of actions that they undertake within, inside their territory, among their own populations: the precariousness is swept toward the edges and peripheries. In this case the borders do not exist as such and are much more porous; therefore, they also require militarisation and control, security agents and riot police.

This trend is becoming more common, overrides the social, economic and political cooperation between states and directs us to an increasing militarisation of the borders, not only between states, but between social realities and humanitarian crises, generating a model of containment through the use force that leaves little space for social cooperation and peace.

Ainhoa Ruiz Benedicto has specialised in social and armed conflict at masters level, and has participated in educational projects in Peru, as well as activism in Palestine and conflict resolution projects with gangs in Colombia. She is collaborating with Centro Dalás on various peace campaigns, and is a social activist in Barcelona.