West Papua: “We will be free”

One of the biggest challenges for nonviolent resistors is dealing with oppression. A worst case scenario is a remote and isolated community facing a genocidal regime far from the watching eyes of the international media. This is the situation in West Papua, a Melanesian nation-in-waiting on the western half of the island of New Guinea, occupied by the Indonesian military since 1963. Papuans want political independence and at the same time they demand recognition of their basic rights as indigenous people living on their customary land. The Indonesian security forces have responded brutally to these demands. Consider these two brief examples:

1. In the early hours of 6 July 1998, the Indonesian military opened fire on a crowd of unarmed protesters camped underneath the water tower in Biak City. The violence did not end at the Tower. Police and military officials rounded up the survivors and took them on board three waiting warships. There the survivors were brutalised and killed. Their mutilated bodies were then thrown overboard. More than 100 Papuans were massacred. No media were present. It took a week before local human rights investigators arrived and even then they had to operate clandestinely and it was months before the story got a mention in mainstream international newspapers, if at all. Even now there has been no inquiry; no justice. The perpetrators were promoted and the survivors were sentenced to jail.

2. Fast forward to 2010. Rev Kindeman Gire, a priest with the Kingmi Church was stopped beside a road by the Indonesian military. He was forcibly held down while soldiers deliberately burned his genitals with a burning stick. Gire later died. Sadly, public acts of torture, like that experienced by Reverend Gire, are not isolated incidents. Dr Yohanes (Budi) Hernawan OFM, a scholar whose doctorate investigated the practice of torture in West Papua, has documented hundreds of cases. Hernawan argues that far from trying to extract information, the Indonesian military and police use torture to govern. Human bodies are physically marked, often as part of a public spectacle – in police cells or in the front yard of military barracks, in full view of the street – to assert Indonesian sovereignty over Papuans in the most visceral way imaginable. What is slowly changing is that unlike the 1998 Biak Massacre, state violent is increasingly being filmed and distributed to networks outside the country in the hope of gaining international action in support of Papuan aspirations. Gire’s death for instance was filmed on a soldier’s mobile phone and later obtained by activists at great personal risk. That footage went viral, igniting outrage inside and outside Indonesia.

These two stories should be enough to illustrate that in many ways West Papua is a worst case scenario: remote communities isolated from the international media facing an opponent willing to use extremely ruthless oppression to maintain their rule. Many Papuans sincerely believe the Indonesian government is intent on eradicating them as a distinct people. But as horrifying as these stories are, oppression does not necessarily ensure submission. Activists in West Papua have innovated across the following five dimensions to develop resilience, learning over time how to resist while continuing to build social and political power.

In order to undermine state power movements need to analyse the source of that power then design strategies and tactics to withdraw cooperation. Papuans are doing that, generating elite defections, cracks in the Indonesia's government system of rule. Most recently, the head of the provincial parliament in Papua, Mr Yunus Wonda, wrote to other Melanesian countries - Papua New Guinea, Fiji, the Solomon Islands and Vanuatu - to express his support for the pro-independence group the West Papua National Coalition for Liberation. In 2010, all 36 members of the Papuan People's Assembly, a kind of indigenous senate charged with safeguarding Papuan cultural values, publicly withdrew their support for Special Autonomy, a key policy designed to dilute the clamour for self-rule. The Assembly argued that this policy had failed. Then they backed a two-day 5,000 person occupation of the Provincial Parliament.

However, anti-occupation and secessionist struggles face even tougher challenges than conventional regime change struggles, which are difficult enough. As well as building a mass movement inside the country, self-determination activists need to ‘extend the nonviolent battlefield’. That requires three things. First, the domain of the struggle needs to be expanded. Resistance needs to be waged inside the occupied territory (like West Papua), inside the territory of the occupier (like Indonesia) and inside the societies of the occupier's elite allies (like the United States, ASEAN countries and the EU). Second, Papuans need to activate what Johan Galtung called the 'Great Chain of Nonviolence'. That means recruiting new allies who can bridge the cultural and social distance between the occupier and the occupied. Progressive Indonesian allies are starting to do that. Third, Papuans must disrupt the ways the international community provides capacity so that the Indonesian government can continue the occupation. Essentially that means raising the political and economic costs of the occupation.

Papuans have also creatively defied laws. When the Indonesian state issued a decree banning displays of independence symbols in West Papua (Law 77/2007), Papuans defied this by painting the flag on their faces and bodies, weaving the Morning Star into nokens (traditional string bags) and displaying other aspects of distinct Papuan culture in daily life. When the police arrested Papuans for painting the flag on their faces and body they retorted, 'this isn;t a flag it's paint!', or 'this isn't a flag, it's a noken!' Now displays of the Morning Star on bags, clothes, jewellery and bodies have become so ubiquitous that Law 77/2007 has become almost impossible to enforce. Papuans also use traditional dress and eat Papuan food to reinforce they are Melanesians, not Indonesians. 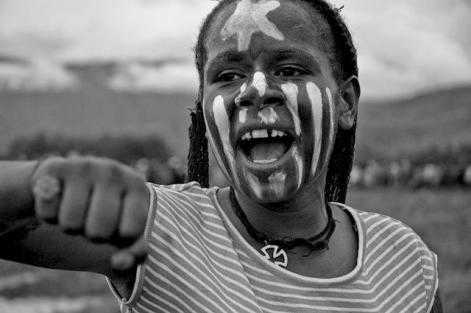 Whenever a single charismatic leader has arisen in West Papua they have been neutralised by the state. Arnold Ap and Theys Eluay were both assassinated. Thomas Wainggai died in jail. Kelly Kwalik was shot dead by Indonesian troops. Forkorus Yaboisembut currently languishes in jail. That is why West Papuans are slowly shifting to a decentralised network structure, the organisational structure most likely to promote a movement’s resilience to oppression. It is important to emphasise that organisational structures like coalitions, alliances and federations still facilitate unity. However, it is unity around goals, strategy and tactics rather than a single hierarchical organisational form. This is what West Papuan leader Benny Wenda talks about when he says: ‘Let’s not try and have a single organisation, let’s have a shared agenda’. The challenge for Papuans is to enhance coordination between the different nodes of the resistance, inside and outside the country.

Individuals can prepare themselves

Courageous resistors are made not born. Kristina Thalhammer and her colleagues say the path towards a repeated willingness to risk oneself in order to search for justice and protect others passes through six distinct crossroads. At each crossroad decisions need to be made. First, a person has to become aware of the issue. Second, the issue has to be interpreted as an injustice. Third, the person needs to accept personal responsibility, and fourth identify possible choices for action. The fifth crossroad is taking action and the sixth crossroad is sustaining action over time. Alternative destinations - aside from becoming a courageous resistor - lead to becoming a bystander or perpetrator. Papuan religious leaders like Benny Giay, Neles Tebay and Sofyan Yoman have walked the path to becoming courageous resistors. So too are many political prisoners. So too have many other Papuans. The movement for freedom in West Papua is growing because more and more people are casting off their fear of what the Indonesian police and security forces could do to them. When Rev Benny Giay learnt he was on an Indonesian intelligence hit list he responded ‘I cannot just sit there whenever children of the Lord are being abused or murdered. I have to stand up and fight for their rights and give voice to the voiceless.’ People like Rev Giay enlarge the possibility for others to cast off fear. Their courage transforms their political and social environment. Courageous Papuan resistors help others take action to herald in a new Papua.

Papuans are inviting different kinds of outsiders to accompany them in their struggle. For a few years - before the Indonesian police forced them out of the country - Peace Brigades International provided unarmed protection to West Papuans. Internationals from PBI embodied the concern of the international community, becoming the eyes and ears on the ground of a growing international network. This is precisely the reason the Indonesian government expelled PBI from the country. Papuans have also secretly invited journalists into the country who have travelled undercover to report on the struggle. Assistance from external actors, provided at the request of Papuans, respectfully delivered in ways that enable Papuan led resistance, and in support of Papuan led goals, is welcomed. The quantity and quality of these international linkages need to be increased.

The struggle for independence and demands for basic rights cannot be separated one another since one influences the other. As one West Papuan leader once cautioned ‘clamouring for basic rights is not the enemy of independence.’ The struggle for independence is much more widely known but West Papuans are also nonviolently defending their land and customary rights. For example there is nonviolent resistance by the Amungme and Kamoro to the U.S owned Freeport gold and copper mine; a campaign for economic justice by women market sellers; and, nonviolent resistance by the Malind Anim indigenous people to the MIFEE (Merauke Integrated Food and Energy Estate), a staggering 1.6 billion hectare land grab by Indonesian and transnational corporations that will displace hundreds of thousands of indigenous peoples.

West Papua is occupied by the Indonesian government who use state violence to desperately maintain their grip on power. This direct and systemic violence signifies the poverty of the Indonesian government’s political imagination. However, state violence rests on fundamentally flawed logic. The tighter the Indonesian government tries to keep Papua the more their legitimacy slips. Ultimately oppression, even extremely ruthless oppression, cannot ensure Papuan compliance with continued Indonesian colonial rule. While the Indonesian government refuses to allow Papuans to peacefully, freely and fairly choose their own political future, any claim that Indonesia is a democracy will ring hollow. Through providing concrete examples in this article we have asserted the reality that West Papuans are not giving up their fight for self-determination. Nor are they fighting Indonesian rule on the oppressor’s terms. Remarkably, Papuans are using nonviolent resistance and conventional political processes much more than armed struggle. They are using nonviolent resistance to defend their basic rights as indigenous people and to struggle for political independence, while recognising the connections between both goals. With the kind of intelligence, moral courage, innovation and determination demonstrated above, there is no question in our mind that one day, West Papua will be free.