There are many ways to describe violence. A former Chair of War Resisters’ International, Narayan Desai, once said;

“Everything that disturbs the harmony in life is violence.”

Every school of nonviolence will have their own definition of violence; you don't need to agree with Narayan. However, there is no doubt that violence is much more than physical violence against other humans. 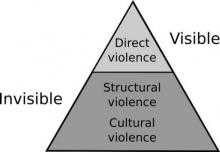 Peace movements have, traditionally, focused on the direct violence of the battlefields, but in recent years other forms of violence have been added to their agenda; the costs of wars reducing the budgets for health care and education, torture, school shootings, new weapon systems, and - to some degree - domestic violence. Other social movements have taken on psychological violence (bullying), violence against animals, violence against nature, and a variety of different forms of structural violence, such as poverty and economic justice issues.

Why understanding violence is important

If we try to compare the different types of violence, we can quickly encounter problems. If we focus solely on the deadly outcomes of violence against humans, we will see that they are in different 'divisions'. The number of humans killed in armed confrontations on battlefields has for some years been around 300 a day, or 100,000 a year. A huge number, but if we compare this figure with other causes of 'early deaths' in the world, traditional wars could be seen as a minor problem! According to the World Health Organisation, there are 60 million premature deaths a year, and at least half of these are due to easily curable diseases, or inadequate access to drinking water, food, and shelter. These are examples of structural violence, that are killing as many people every day as the number killed in wars each year. However, direct violence – like war – should be understood as a manifestation of the complex structural and cultural violence that it is rooted in; this is summed up in War Resisters' International's founding declaration;

“War is a crime against humanity. I am therefore determined not to support any kind of war, and to strive for the removal of all causes of war."

Different forms of violence are feared much more than others. 'Terrorism' is hardly visible in statistics, while the fear of terrorism is very high. The fear of 'terrorism' is real, but 'terrorism' is not in the 'top-10' list of causes for early deaths in any country; the only exceptions might be countries with ongoing full scale wars. In general, the risk that you will be killed due to political or religious motivated violence is close to zero; the chance that your partner or someone else close to you will be the perpetrator is much higher. This is not meant to show disrespect for any victims of such politically-motivated violence, but it is important to consider how the fear of violence can be different to what is actually experienced, while other forms of violence are largely ignored.

How do we distinguish violence?

Sanctions are sometimes listed as a nonviolent method, as an alternative to violent conflict. However, even UN-ordered sanctions can have very violent consequences. During and after the first Gulf war in 1991, Iraq was punished with sanctions by the UN Security Council. The goal was to harm the Iraqi president Saddam Hussein, and to make him so unpopular that the people of Iraq would try to remove him. However, in a country seriously harmed by massive bombing, the effect of a near-total financial and trade embargo was devastating. By the time the sanctions were replaced with a new war (the occupation of Iraq in 2003), 1.5 million people had died as a consequence of the sanctions. This is another example of structural violence, and the total number of victims are higher than for all those killed by atomic, biological and chemical weapons in human history. One reason to oppose weapons of mass destruction is that they do not separate civilians from military, and yet these sanctions were extremely selective; Saddam Hussein and his general never lacked medicine, water, food, or shelter. The brunt of the sanctions was felt by the poor, newly born, sick, and elderly people who were unable to access the resources needed for survival.

'Violence is any action that reduces the possibility for a human to live a life according to their full capacity.'

Using this definition, we could say that cutting an arm off a person is an act that reduces the capacity of a person's life, and so should be considered violent. However, that act will in fact be judged very differently depending on who does it and why it is done. For example, paramilitaries in Colombia have used chain saws to cut off the arms of young men who refuse to join them, and this is clearly an act of brutal violence. In contrast, when a doctor removes an infected arm to prevent a patient from dying, we do not even think of that act as violence, but as life-saving medical treatment. In both cases the person loses an arm and will have a reduced quality of life, and this fits with the descriptive definition of violence above, but the normative context for these two actions places them on opposite ends of a moral spectrum.

If we enter into a discussion on violence against animals, sabotage against dead objects, destruction of nature, or all the structural or cultural forms of violence, we will soon realise that most human activities could be seen as a form of violence. The destruction of material objects is sometimes considered justified; the Ploughshare movement sabotage deadly weapons systems, environmental activists destroy machinery used to cut down rainforest, and animal rights activists have damaged laboratories where experiments on animals are carried out. In these cases, perhaps a more important question than whether or not these actions should be labelled as 'violent' or 'nonviolent' (descriptive), is if we can justify them to ourselves (normative).

For all of us it is therefore of utmost importance to base our activities on norms we have reflected on and can defend when they are questioned. There are no easy answers to all these questions.