Towards a culturally sensitive peacebuilding approach in Africa 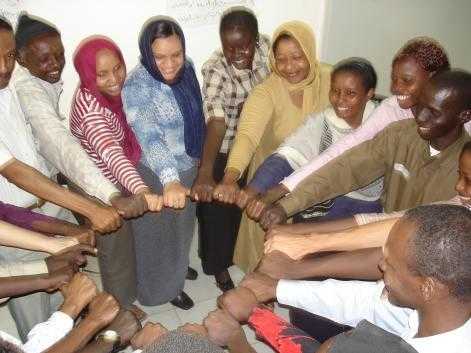 Africa is perceived differently by many people from all around the world. Some see Africa as a continent of hope where people are hospitable, flexible and simple with plenty of natural resources - most of it unexplored. Then there are those who see Africa as a continent of senseless conflicts, violence, poverty, ignorance and the like. The truth is there are opportunities and challenges in Africa. One way to invest in Africa is to embark on peacebuilding to transform conflicts and negative relations to the potential for peace and prosperity.

The term peacebuilding was popularized after 1992, when Boutros Boutros Ghali, then United Nations Secretary General, presented the report: An agenda for peace. In his report Boutros defined peacebuilding as a range of activities meant to identify and support structures which will strengthen and solidify peace in order to avoid relapse into conflict, distinguishing it from peacemaking and peacekeeping.

However, it was not Boutros-Ghali who invented these terms, but the peace researcher Johan Galtung 20 years earlier who called them “approaches to peace”. Together, peacemaking, peacekeeping and peacebuilding formulate a general theory of achieving or maintaining peace. As Miall et al (1999) wrote:

“With reference to the conflict triangle, it can be suggested that peace-making aims to change the attitudes of the main protagonists, peace-keeping lowers the level of destructive behaviour, and peace-building tries to overcome the contradictions which lie at the root of the conflict.”

There are many approaches and techniques to peacebuilding such as through arts and music, dialogue and reconciliation, sports and nonviolence education. Each approach has its uniqueness, significance and challenges. In “Strategic Peacebuilding” Lisa Schirch says:

“Peacebuilding seeks to prevent, reduce, transform, and help people recover from violence in all forms, even structural violence that has not yet led to massive civil unrest. Strategic peacebuilding recognizes the complexity of the tasks required to build peace. Peacebuilding is strategic when resources, actors, and approaches are coordinated to accomplish multiple goals and address multiple issues for the long term. Therefore, Peacebuilding requires multiple and well coordinated approaches to transform violence and conflict into more sustainable, peaceful relationships and structures.”

Why culture is important in peacebuilding?

In our experience, peacebuilding projects are more effective when designed and adapted to the socio-cultural, economic and political context and needs of the local people. There is no “one-size-fits-all” solution to African problems. This is because every context in Africa is unique and finding “African solutions to African problems” requires analysis and understanding of indigenous complex African culture, values, norms and traditions. Even within a given African country there are diverse cultural differences: what works in community “A” may not work in community “B”. For example; in some communities in South Sudan beating a wife may be considered an expression of love while in another community, it's violence. That’s why there is a need to carry out regular research and conduct experience sharing and trainings in order to widen our understanding of local culture for building a culturally sensitive and coherent peacebuilding approach.

Peacebuilding is not new in Africa. History tells us that Africa is the cradle of humanity, an assertion that suggests the existence of rich and diverse indigenous resources and institutions of conflict resolution and peacebuilding dating back centuries.

The idea of liberal peace, according to Mark Duffield (2008), combines and conflates liberal (as in contemporary economic and political tenets) with “peace” (the present policy prediction towards conflict resolution and societal reconstruction). This view reflects the notion that war-torn societies can and should be rebuilt through the utilization of a number of interrelated strategies for transformation. The emphasis is on conflict prevention, resolution, institution-building including so-called democratic elections, and strengthening civil society organizations. A review of existing literature (Ali and Mathews 2004; Reychler 2001, Rupesinghe 1998) on the subject of peacebuilding in Africa, however, reveals a limited analysis restricted to the post conflict phase of armed conflict, which has very limited short term prescriptions for a return to order and stability in a country that has experienced violent armed conflict (David, 1988).

Since the end of the cold war, Africa has suffered its share of violent wars and armed violent conflicts. In Africa, there are many ongoing inter-ethnic and political armed conflicts aimed at achieving political and economic power. Countries emerging from long civil wars often experience challenges in managing former combatants, militia groups and armed civilians. Hence, violent conflicts have become major obstacles to peace and development, particularly in fragile and post-conflict countries. Maintaining the rule of law, good governance and delivery of equitable basic social services is equally challenging. The results are continued wide-spread physical, psychological, cultural and structural violence.

Violence is not restricted to one country, continent, one region or religion. It is universally used to achieve objectives; sometimes through sheer naked aggression, or at other time subtly, covered in the grab of legislation and legitimacy as a tool to maintain law and order (2011). For women, this takes many forms including: rape, forced domestic labour, men beatings their wives, detention and denial of widows to inheritance and discrimination from economic benefits. Elopement of girls (“hijacking girls for marriage”) is perceived as a legitimate cultural practice in many Africa countries. Peacebuilding interventions are needed to build safe and secured environment where people can pursue happiness without fear.

So our thesis is: Peacebuilding is needed. But not in the form of importing abstract recipes coming with the liberal peace paradigm. As Africa faces challenges of importation and imposition of peacebuilding and development interventions, this weakness can be addressed by encouraging and building local capacities to conduct baseline assessments, research or studies and making relevant recommendations to the both local and international peace actors as well as policy makers for improved engagement. Peacebuilding involves building democratic structures through participation of citizens and other stakeholders in democratization processes without which peace will be meaningless. It also means equitable sharing of resources. There are significant challenges in many African countries when it comes to alignment and fair distribution of resources to expenditure priorities. Economic growth and revenues generated from oil and other natural resources are not being channeled to address poverty.

This creates a situation where peace dividends are hardly enjoyed by impatient and impoverished civilians, forcing them to question the meaning of peace. In our experience, many people think peace means the absence of violence and the maintenance of law and order. However it is not only guns that kill. Lack of access to basic means of life, dignity and enjoyment of rights can be as destructive as weapons. Meaningful peacebuilding is not an end in itself - rather a means to a safe and prosperous state, where every person enjoys basic rights and life in dignity. Therefore, addressing structural violence aimed at creating fundamental state reform, in which equitable social services are provided without discrimination, is critical if we are to build Africa safe for all.

The role of peace stakeholders

There are many actors working on peacebuilding in Africa. In the heart of these organizations are social and peace movements affiliated to WRI, IFOR, COPA (Coalition for Peace in Africa) and other regional movements. The African Centre for Constructive Resolution of Dispute “ACCORD” is based in Durban with offices in other countries, and there are women-focused groups including Women Action Network for Peace (WANEP) and Women Peacemakers Program (WPP).

At the same time, newer research into peacebuilding strategies and effects teaches us that while civil society has an important role to play in peacebuilding, state actors (with their much greater to resources) cannot be neglected, and peacebuilding works best where the various actors manage to cooperate. Hence, the role of regional and sub-bodies, such as the African Union (AU), Intergovernmental Authority on Development(IGAD), Economic Community Of West African States (ECOWAS) and Southern African Development Community (SADC), is important. Although sub-regional bodies were originally established to promote socioeconomic welfare of the region, they ended up playing greater roles in peacemaking as an entry point to economic development.

There is also, especially from the side of international donors and agencies, an over-emphasis on certain activities and a neglect of others that may have much wider impact. For example, to look at another region, in the Balkans after the wars of the 1990s, everyone talked about and paid for “reconciliation” while lack of adequate education and professional perspectives caused a whole generation of youth to remain without any meaningful perspective what to do with their lives.

The theme group will begin with an interactive session on: What do we mean by peacebuilding? An introduction to the meaning of peacebuilding in general and on the African continent in particular.

On day 2, we will look at South Sudan as an example, and discuss various approaches, looking at a wide range of actors: civil society groups working to change peoples' attitudes, the role (or non-role) of civil society in peace negotiations, discussing approaches preferred by the international community like security-sector reform and state-building, looking at the problem of security for civilians including the role of UNMISS and unarmed civilian peacekeeping provided by the INGO Nonviolent Peaceforce, along with questions of economics, gender, etc.

On the concluding day, 4, we will seek to draw lessons from the case studies, and discuss the issue of peacebuilding, nonviolence and the contributions of international solidarity and support. The key question will be how can we better work together?