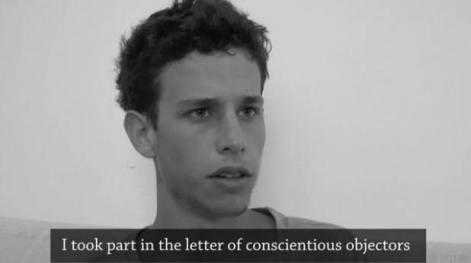 War Resisters' International supports nonviolent resisters in Palestine and Israel. We are in solidarity with conscientious objectors and those who refuse to participate in the Israeli army. Conscription is active in Israel for women and men, for Jewish Israelis and Palestinian Druze. As well as conscripting full-time recruits, reservists are also enlisted after their mandatory military service has ended. Many reservists have been drafted in 'Operation Protective Edge', the Israeli military assault on Gaza.

If you are subject to compulsory military service in Israel, and do not want to go, contact New Profile.

Listen to Udi explaining why he will not join the Israeli military:

Uriel Ferera, a conscientious objector in Israel, is in a cycle of call up to the military, imprisonment for refusal, and release. This video was taken at a support rally for Uriel outside the military prison that he is incarcerated in

In the film you will see Omar Sa'ad, a Druze Palestinian war refuser who was imprisoned six consecutive times for refusal to join the military.

Check New Profile, WRI's affiliate in Israel, for news of conscientious objectors in Israel. Our Palestinian section, Jenin Creative Cultural Centre, can be contacted through their website. On facebook, Conscientious objectors against the occupation, Refusal to serve in the IDF are good sources of information on new refusers.

WRI affiliate Women Peacemakers Program have released a statement on violence in Gaza.