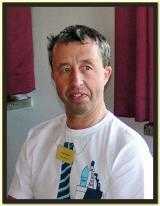 Roy Prockter, who died suddenly on 18 June, aged 64, from a heart attack, was a chartered accountant and an active Quaker, who made both his professional skills and his commitment to nonviolence available to a number of radical pacifist groups and organisations.

One of his main concerns was the compulsory deduction of taxes contributing towards maintaining armed forces and providing lethal weapons.

He became active in the Peace Tax Campaign (now Conscience – Taxes for Peace not War), campaigning for a legal right to divert the military-related portion of personal taxation to a publicly operated peacebuilding fund, comparable to publicly-recognised alternative civilian service for certain conscientious objectors to military conscription.

Roy decided to go beyond campaigning to actually withholding the military-related portion (which he was able to do as a freelance accountant paid fees rather than wages), and attempting to pay the money to constructive areas of government, such as overseas aid. This led to a series of appearances in civil courts for non-payment.

In 2004, Roy joined with six other like-minded people in a civil action to attempt to establish a legal right to diversion of ‘military’ taxes to peaceful purposes. The group, calling themselves the Peace Tax Seven, went through the English courts to the house of lords, with no practical success, despite an occasional favourable judicial comment on the side, and then attempted petitioning the European court of human rights, using the ‘freedom of conscience’ principle enunciated in the European convention on human rights, but were refused even a preliminary hearing in court. The possibility of further action was still under consideration at the time of Roy’s death.

Other peace groups in which Roy was involved include: Conscience and Peace Tax International (treasurer); Campaign Against Arms Trade (steering committee), and its related charity, Trust for Research and Education on the Arms Trade (trustee); the Lansbury House Trust Fund (secretary); Peace News Trustees (vice-chair); Peace Pledge Union (accountant). Outside the peace movement Roy was a regular tricyclist, active in the Tricycle Association; and active also in the Campaign for Real Ale.

As an accountant, Roy was always willing to explain financial technicalities in ‘human’ terms, and as a committee member he invariably looked for reconciliation in matters of contention. His contribution will be much missed.