We don't say that you need nonviolence training before you go out on the street and hold up a placard or give out a leaflet. Not in most countries anyway. However, the whole process we refer to as nonviolence training—analysing issues, envisioning alternatives, drawing up demands, developing campaign strategy, planning actions, preparing actions, evaluating actions or campaigns—can increase the impact your group has on others, help you to function better in action and cope better with the risks and problems it poses, and expand your action horizons. Basically, nonviolence training helps to create a safe space to test out and develop new ideas or to analyse and evaluate experiences.

Nonviolence training can prepare people for participation in nonviolent direct action, teach strategy development techniques and the skills needed to engage in the strategy, and work on group process and issues of oppression. Nonviolence trainings are often used to prepare people for specific actions, to learn about the scenario, to develop a plan and practice it, to understand the legal issues, and more. They are an opportunity for a group to build solidarity and to develop affinity groups. Through role playing (see 'Role Playing' Exercise, pX), people can learn what they might expect from police, officials, other people in the action, and themselves. It can help people decide if they are prepared to participate in the action.

Nonviolence training has also been used as a tool for mobilisation and movement building. Many movements and campaign's have used dedicated training to build power, and nonviolence trainings can help to distribute power throughout a movement by empowering activists at the grassroots. Nonviolence trainings bring people in a community together together to explore issues and concerns, build trust, and work out how they can act together. There have been many examples of nonviolence training helping to strengthen a movement, from the civil rights movement in the USA, to Faslane 365 (an anti-nuclear weapons campaign in the UK) to the People Power movement, which overthrew the dictatorship of Ferdinand Marcos in the Philippines.

Nonviolence trainings can range from several hours to several months, depending on factors such as the campaign's needs and timeline, the goals for the training, the experience, available time and other resources, and availability of the participants and trainers. (see 'tasks and tools for organising and facilitating trainings')

A nonviolence trainer is someone who can facilitate a group through a learning process. A trainer must be knowledgeable regarding the topics of the training, but should not be a know-it-all. A trainer's goal is to guide the participants to develop their own ideas, not to tell people what to think and do.

Not all groups and communities who want nonviolence training have local trainers. But when people understand what skills are needed to conduct a training, they may realise they have already developed some of those skills and used them in different contexts. You can create a training team of co-facilitators who together can add their combined skills and experience. If possible, the training team should reflect the participants, consisting of people of various gender, age, and ethnic backgrounds. 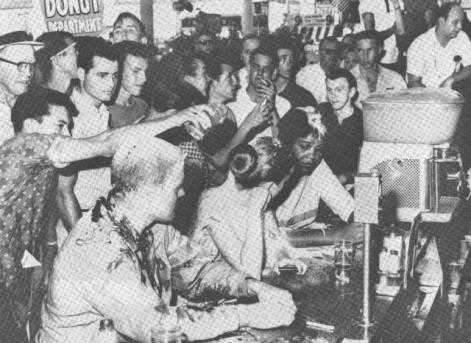 The earliest trainings in the U.S. took place in 1941 to prepare black and white youth to challenge racial segregation, which was often met with violence. Four youth groups aimed to integrate a swimming pool in Cleveland, and prepared by role playing. They used what they learned to develop a stronger action. This became a model of training for interracial actions.

In 1942, radical pacifists formed the 'Nonviolent Action Committee of the Fellowship of Reconciliation', which trained teams to provide leadership in anti-racist and antimilitarist work. From this group grew the Congress of Racial Equality (CORE) which, in 1945 became the first organisation to develop nonviolence trainings in preparation for involvement in nonviolent actions to desegregate. CORE's first major protest in 1947 was the Journey of Reconciliation, when an integrated group of 16 men rode buses together through the segregated South for two weeks. Nonviolence training, co-facilitated by Bayard Rustin and George House, prepared them for the violence and jail sentences they encountered.

Beginning in 1947, CORE ran month-long training workshops in Washington, DC. For 10 years, participants learned theories and skills in nonviolence and organising, with the goal of ending segregation in the Capital region.

In 1959 in Nashville, Tennessee, James Lawson began weekly workshops on nonviolent methods which became participatory training sessions with stories of nonviolence, role plays, and discussions. Lawson facilitated a process of empowerment for the young black students living in a segregated society, where they developed a sense of their own value. They learned how to focus on the issue of racist segregation and choose a target. Not believing in hierarchical leadership, Lawson organised a central committee which was open to those taking the trainings. As the students developed a strategy to desegregate stores, they learned to organise, conduct a demonstration, negotiate, and deal with the media. They role played the physical and verbal abuse they would receive when they sat at a segregated lunch counter, learning how to nonviolently resist the impulse to run or fight back. Their three month campaign - which was preceded by six months of trainings - was a success, and the restaurants and stores of Nashville were desegregated. Nashville became a model for campaigns and trainings.

Eight of the young black students went on to be key organisers of major campaigns in the civil rights movement and beyond. One of them, Bernard Lafayette, trained the trainer of the first two occupations of the nuclear power plant at Seabrook starting in 1976 (see 'Seabrook-Wyhl-Marckolsheim: transnational links in a chain of campaigns' pX). Rev. James Lawson continues to provide nonviolence trainings.

Nonviolence training is part of a decades-old tradition that has empowered people to take action on the issues that matter to them. Throughout the world nonviolence trainings continue to be used to build stronger movements.

For more on Nashville, see A Force more Powerful (www.aforcemorepowerful.org/)