The militarization of youth and how to counter it

The images of war, armed conflict and organized violence worldwide can take different forms, but the one thing they almost always have in common are the young men and women filling the lines of military and paramilitary organizations.

In both countries that still have conscription, and countries with professional militaries, governments, education systems, the militaries themselves and even privet companies and organizations, are all actively promote militaristic values, both to fill the ranks of armed forces, and to legitimize the use of organized violence socially. 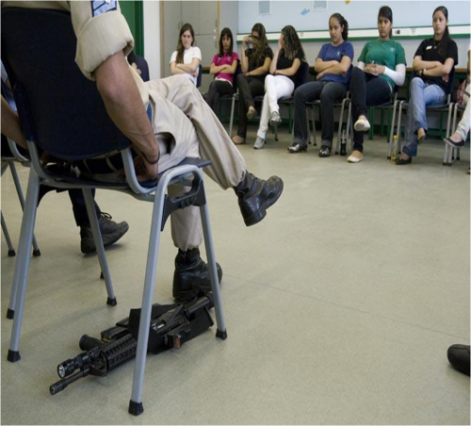 In conscript societies, even though conscription is enforced by law, there are still great efforts to militarize youth. In Israel for example, much of the effort is concentrated in schools. Soldiers going in and out of classrooms explaining about units and positions, teachers being measured according to the enlistment rate of their students, principals promoting their schools by showing-off the high rate of combat soldiers or officers that graduated from the schools, and ministers of education that out-right declare that preparation for military service is one of the goals of the education system. According to a survey done by WRI in 32 countries (both with conscript and professional militaries), in 18 of them there’s an official collaboration between the ministry of education and the military, and in the majority of countries with no mandatory service, the military does overt recruitment in schools. But militarization of youth doesn’t start and end within the walls of education systems.

While more and more countries in the world abolish conscription and move to a professional army there are plenty of other, more and less official ways to militarize youth without laws forcing conscription.

While most youth around the world have never shot a gun, how many of us have fired, and killed someone in a computer game? While most youth in the world might never were a military uniform, how many of us have worn camouflaged cloths presented as just another form of fashion? How many of us played with toy guns? Militaries also find more and more ways to be appealing to youth not only through traditional violent-militaristic values. The promise of adventure, upholding values of democracy of even gender equality, and finally, the promise of personal gain, whether it be by subsidizing education or by promising a lasting carrier. In the survey done by WRI on the militarization of youth it was found that in 30 of the 32 countries surveyed, this idea that the military will lead to future employment or study opportunities is one of the strongest selling points used by all militaries, conscript and professional as one. Even when many of these promises are based on lies, this rhetoric targeting youth who still can’t form strong opinions or explore different horizons, especially it underprivileged group of different societies, seems to work. Young men and women enlist on the pretence of these false promises and social values that push them to do so.

But militarization of youth is not reserved only to militaries. This is also true to countries in which strong para-military groups operate. As an example, while Kenya is considered a Non conscript country, militarization takes a totally different form where the common denominator is the false notion that the use of force is necessary for effective leadership and control. It has been noted before in many quotas that such a notion is in fact the premise of militarization. The existence of the same comes at the expense of rule of law mechanisms and democracy, as well as the realization of human rights. As witnessed in the Kenyan situation the architects of militarization are not always put in place by the state. In fact, there are instances where the state “is missing in action” and this opens space for militarization by groups, such as the militia groups in Kenyan informal settlements like Mungiki1 and the likes. Similar situations are witnesse

d in many sectors that are considered disorganized and with gaps like the public transport, security and social service where these groups initially come in to feel the gaps but eventually turn into militias and dreaded terror groups that extort money from residents in the name of protection/security, garbage collection e.t.c. The challenge however, is the fact that militarization makes its mark not only on political and legal systems, but also on social behavior. Frequent threats and harassments are therefore symptoms of the breakdown of social relationships as well as the institutions of rule of law and democracy. In these circumstances, the above mentioned threats are accompanied by extrajudicial killings, physical harassment of all types among other vices.


So what can we do about this?

Many anti-militarist activists around the world are finding different ways to counter the militarization of youth, and the more creative we are, the wider the affect we can have.

Working on school, municipal and regional levels to try to demand military-free education has been the main focus of some groups, others have been working on designing and changing computer games. Some activists focus on creating alternative spaces for youth to escape to and be able to criticize and challenge the direction their society is forcing them towards, and some focus on giving non-violent trainings to provide youth with an alternative way of reacting to everyday situations in which violence might otherwise be the default. Some groups focus on highlighting the use of militaristic symbols and soldiers in advertisement, and some in exposing the real conditions of soldiers as opposed to the one shown in military advertisements. An intentional day of action for military free education, that will be expanded into a week of action this year, has been an opportunity for many of these initiatives to come together.

In the Kenyan case, as an example of many others, most young people targeted for militarization are ones with minimal levels of education. Architects of militarization ride on their vulnerability due to lack of basic education and exposure to other ways and means of doing things to lure them into this system which eventually becomes the only thing they know and most remain as such lest they turn around or take off. In response, offering or ensuring accessibility to basic education is also a method to counter militarization . Education and the exposure that comes with it introduces youths to alternative and better ways of living offering them a non-militarized path in life. Coaching, mentorship and accompaniment trough informal but tailor made dialogue processes can also play important roles in deconstructing the old notions of militarization. The Kenyan constitution 2010 opens space for citizens’ participation in governance and it is an alternative way of engaging young people in other means of building the nation. Citizen participation forums for a while now have been an alternative way of making sure that young people are involved in local and national process that are aimed at bringing on board their contribution to development, peace and reconciliation and governance at it were, and therefore they slowly but steadily become part of crucial decision making processes. This come out as an alternative way of making sure young people are constructively engaged in nation building as opposed to being part of militarization activities.

By highlighting the affects militarization has on youth, on women, on the poor, the uneducated, on LGBTQ, and on other marginalized communities either targeted by the military for enlistment, or becoming targets for violence in their own society due to militaristic values, we can try to challenge all of these.

1 Mungiki is a Kikuyu (largest tribe in Kenya) word that means a united people or multitude or mass. It’s a group that mostly consists of young people. Mungiki operates most extensively in Nairobi’s informal settlement as essentially constituting a street gang or a criminal network that contributes to, and feeds off of, an environment plagued by a state of perpetual security crisis. It is said that it originally rejected westernization and everything that was believed to be theirs including Christianity and therefore wanted to practice the African culture.