Lutzerather Gate Blockade cleared at Büchel nuclear base in Germany 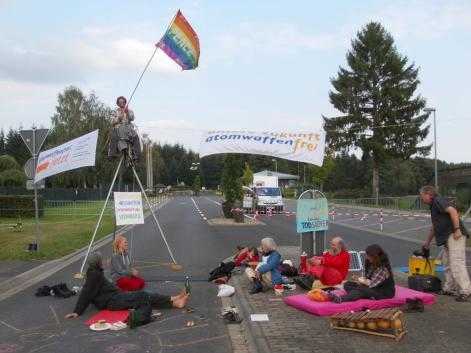 Hiroshima Remembrance Day , August 6 2014, 11 am. The blockade at the Lutzerather Gate of the Büchel nuclear base was cleared at about 6.30 am this morning to allow vehicles entry to the nuclear weapons base. Of the 12 activists blockading the gate, one could not be immediately removed because he had locked himself to the gate with a bike lock around his neck. The police had to lift him and open the gate with him still attached. After attempts to break the lock, the police were forced to cut the gate itself in order to remove the protester. He and two other activists without ID were arrested and taken to Cochen police station, one of them is under-age. All the other blockaders were let go after their personal details were recorded.

Peace activists have been blockading Büchel nuclear base near Cochem in Rheinland Pfalz since 6 am yesterday morning. Yesterday at 5 pm the blockade participants decided to extend the blockade overnight and to end at 8.15 am the next morning. That is the time that the nuclear bomb was dropped on Hiroshima on August 6th, 1945. After the clearance at the Luzerather Gate this morning, the activists decided to extend the blockade at the main gate to 12 midday. This means that the blockade will be the longest ever at the Büchel nuclear base, lasting 30 hours.

The action was initiated by the Youth Network for Political Action (JunepA) and other peace groups joined them, including the „Peace Riders“. The Büchel Air Base in the Eifel region is the only known place in Germany where nuclear weapons are deployed.

US and German armed forces are stationed at the nuclear base. The US soldiers guard and maintain the nuclear bombs, while the German pilots are required – should the decision to use them be made – to fly over their targets and drop the nuclear bombs. This is known as „nuclear sharing“ and is also similarly practiced in other NATO member states, such as Italy, the Netherlands, Belgium and Turkey.

The aim of the action at the Büchel is to hinder the smooth running of the nuclear base in order to take a stand for a world without nuclear weapons, war and violence. The blockade is part of the action camp set up by the group GAAA „Gewaltfreien Aktion Atomwaffen Abschaffen“ (Non-Violent Direct Action for the Abolition of Nuclear Weapons). The camp is part of the German campaign „atomwaffenfrei.jetzt“ („abolition.now“) Protests at the Büchel base go back decades and include vigils, civil inspections and blockades. This year the camp is at Büchel from August 2nd to 11th and in this period of time various other actions are planned.

Pictures of the action can be found here: http://www.buechel-atomwaffenfrei.de/aktuell/