On September 11, 1973, the Chilean junta, backed by the CIA and the Nixon Administration, overthrew the democratically elected government of Socialist President Salvador Allende. Priscilla Hayner, in her book Unspeakable Truths, Confronting State Terror and Atrocity (2001) outlines the devastating impact: “The regime espoused a virulent anticommunism to justify its repressive tactics, which included mass arrests, torture (estimates of the number of people tortured range from 50,000 to 200,000), killings, and disappearances.” The dictatorship assassinated, tortured, and exiled thousands of political opponents and visionaries. 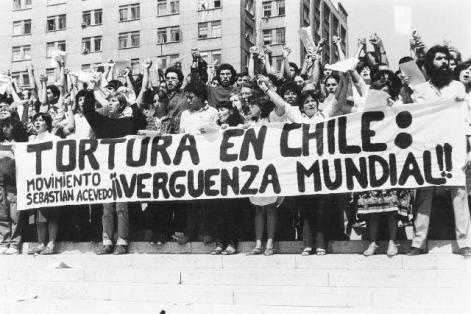 Under these conditions, a foreboding silence, the result of threats and terror, hung over Chile. Some of us wondered, “could Gandhian insights about the power of nonviolence help the struggle to defy the terror?”

Nonviolence refers to a philosophy and strategy of conflict resolution, a means of fighting injustice, and — in a broader sense — a way of life, developed and employed by Gandhi and by followers all around the world. Nonviolence, then, is action that does not do or allow injustice.

Crying Out the Truth

A few of us decided to try to inspire others to speak up against the dictatorship by “crying out the truth.” We faced a double suffering: the pain involved in enduring the dictatorship’s violence, and the suffering caused by keeping silent out of fear. To not cry out while those we love were killed, tortured, and disappeared was unendurable. Clandestine pamphlets and leaflets were printed. Slogans that denounced human rights violations were painted on the walls at night at great risk to safety. Underlying these actions was the principle of active nonviolence: since there is injustice, the first requirement is to report it, otherwise we are accomplices. The clandestine actions helped spread the principle of telling the truth and acting on it. Yet, despite the risks, we needed to move beyond clandestine protests: we needed to move the protests against the Chilean junta into the public arena.

Activating the public movement against torture

José Aldunate, a Jesuit priest who became the leader of the Sebastian Acevedo Movement Against Torture in Chile, says in his memoirs, “A comrade came to us and brought up the fact (of torture). We educated ourselves about torture and about the dynamics of nonviolence. We watched a film on Mahatma Gandhi. I was more motivated to protest against poverty, but I responded to the discipline of the group. We deliberated and decided to undertake a nonviolent demonstration to denounce torture... to break the barriers of silence and hiding with regards to torture, we had an obligation to denounce it in public. We needed to shake the population’s conscience.”

On September 14, 1983, ten years after the regime took power, the anti-torture movement was born in an action in front of the headquarters of the National Investigation Center, 1470 Borgoño Street, in Santiago. Around 70 people interrupted traffic, unfurling a banner which read “Torturing Done Here.” They shouted their denunciation and sang a hymn to liberty. The group returned to this scene to denounce the regime’s crimes against humanity at least once a month until 1990.

In order to act, we needed to openly defy the State of Emergency provisions decreed by the junta in order to terrorise the population. We needed to break through our own sense of powerlessness, isolation, and fear.

The movement denounced torture. It left to other entities the task of investigating and making declarations. It had no meeting place, no secretariat, no infrastructure. It met in the streets and plazas when it was time to act. It had no membership list. Participants came by personal invitation, as the movement had to avoid infiltration from the secret police and other repressive institutions. Instructions were passed from person to person. Participants were mainly trained during the actions themselves, where we evaluated each action on the spot.
Participants faced legal and illegal sanctions when detained and prosecuted as they often were. Tear gas, beatings, detention, and prosecution were common practices used in retaliation against demonstrators. Torture was also a possible consequence of being arrested. Not only Sebastian Acevedo movement participants faced these sanctions, also reporters and journalists willing to report the actions and the issues that were exposed.

At some of the actions, there were as many as 300 participants. Some 500 people participated in total. There were Christians and non-Christians, priests, monks, slum dwellers, students, old people, homemakers, and members of various human rights movements; people of every class, ideology, and walk of life.

The main goal was to get rid of torture in Chile. The means chosen was to shake up national awareness (consciousness raising) and rouse the conscience of the nation until the regime would get rid of torture or the country would get rid of the regime. In 1988, after a widespread anti-intimidation campaign, the nonviolent “Chile Sí, Pinochet No” campaign helped, to Pinochet’s shock, to defeat a plebiscite designed to ratify his rule.

Efforts to end the culture of impunity that arose during the Pinochet years, and to engage in national reconciliation, continue, but nonviolent protest provided an important means, among others, to overthrow the dictatorship.