Campaign of the Month: Arming all Sides 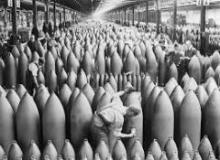 For the next four years the First World War may be used to promote militarism. But to use the war to promote military spending and justify conflict is a miserable legacy for those who died. CAAT is challenging this militarism, which helps to sustain the arms trade now, by exposing the profiteering of the arms trade during the First World War, and the opposition to it that followed. A new website http://armingallsides.org.uk will be launched in July to expose the arms trade in that period, and draw parallels with current times.

By the time of the First World War arms companies had already developed the characteristics that they have been criticised for ever since: corruption, creating war scares and selling to potential opponents or to both sides of a conflict.

Meanwhile, there had been a high level of cooperation amongst companies across national boundaries. In 1901 Vickers gave a licence to German firm Krupp to make Maxim guns, while in 1902 Krupp licensed Vickers to make their fuses.

Armstrong and Vickers (which were incorporated into what is now BAE Systems) both built a super dreadnought for the Ottoman Empire in 1911–1912. In 1913 the companies signed lucrative deals with the Turkish government to maintain two naval bases. No foreign worker, unless they were British, was allowed to be employed there. British workmanship and technicians were thus unwittingly responsible for the slaughter of British troops and their allies at the Dardanelles, Anzac Cove and Cape Helles.

In the 1920s, public questioning of what the war had achieved and opposition to the arms trade was growing. By the time a Peace Ballot, organised by the League of Nations Union, took place in 1934, arms trade profiteering was considered to have been one of the causes of the war and 10 million out of the 11.25 million people polled voted to prohibit the private manufacture of arms.

Arms companies exist to sell weapons, irrespective of national boundaries, and selling to all sides in a conflict has not abated since the First World War. The conflict in Libya in 2011 is a case in point. Arms from one company, MBDA, were used by Gaddafi’s forces, the Libyan rebels and the UK and French military.

To challenge the arms trade we need to counter the myth that arms companies act in the national interest. Exposing their behaviour a century ago will help us to counter those trying to teach the wrong lessons from the First World War: remembering how people opposed the arms trade then will inspire us to challenge it now.

Disgusted by the behaviour of arms companies at the time of World War One? Get involved with inspiring and effective action to end the arms trade today.

Whether it’s writing letters to your local newspaper or MP, organising a stall or a talk, or protesting at your local arms company, there are lots of opportunities to take action against the arms trade today.

If you have ideas for creative actions looking at the arms trade then and now we would be delighted to support you. For example you could organise a ‘Peace Ballot‘  in your town to see what the results are today.

You can also visit Campaign Against Arms Trade’s website to get involved with current campaigns, sign-up for updates, or attend events.