Call to stop US police militarisation and Urban Shield 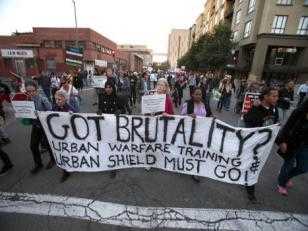 As the police violence in Ferguson, MO continues and there is a growing outcry over military weapons transfers from the Pentagon to police departments all over the US, a group of Bay Area organizations and War Resisters League are organizing a week of action and education against Urban Shield, a massive SWAT team training and weapons expo set to take place September 4-8 in Oakland, CA. According to an internal memo between the Alameda County Sheriff's office to the Board of Supervisors, Urban Shield 2014 will cost at least $1.7 million. National programs such as 1033 under the Department of Defense, and Urban Shield, under the Department of Homeland Security's Urban Area Security Initiative, are behind the militarization of US police forces.

The Bay Area coalition includes Critical Resistance, Arab Resource and Organizing Center, and other organizations led by communities most directly targeted by Urban Shield and other police militarization programs, including people of color, immigrants, Arabs and Muslims, and poor people. While the police occupation of Ferguson this week is one of the most glaring effects of these programs, effects also include; SWAT raids that disproportionately impact the Black community happening 100 times per day in the U.S. often under the banner of the War on Drugs; ICE raids that force immigrants into dehumanizing detention and deportation proceedings; and surveillance and infiltration of mosques and Leftist political organizations.

Rachel Herzing with Critical Resistance said: "Oakland has a long history of resisting the violence of policing, from demands made by the Black Panther Party to popular uprisings in response to the Oscar Grant verdict and the defense of Occupy Oakland encampments. The ever-increasing militarization of police forces has only amplified Oakland residents' alienation from the cops and their resistance to policing. Maneuvers and trade shows like Urban Shield further entrench these separations and have no place in a city interested in safe, healthy neighborhoods."

Urban Shield Oakland trains police military units not just from across California and the US (Urban Shield also takes place annually in other cities including Boston, MA and Dallas, TX), but all over the world, sponsoring joint training and collaborations between police forces internationally. Last year, Urban Shield Oakland included police-military units from Israel, Bahrain, Brazil, and Norway, and this year units from South Korea, Singapore are confirmed to participate. The line between police and military is blurring as parallel military tactics are being deployed globally to repress dissent and increase state control over people who are calling for freedom and justice.

"People across the U.S. are waking up to police militarization" noted Ali Issa, National Field Organizer with War Resisters League. "The growing cross-community movement against it means that days are numbered for programs like Department of Defense's 1033 and Department of Homeland Security's Urban Shield."