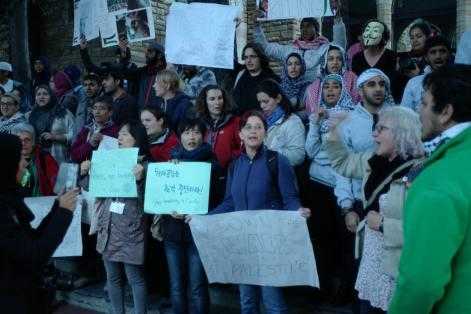 “Just as we said during apartheid that it was inappropriate for international artists to perform in South Africa in a society founded on discriminatory laws and racial exclusivity, so it would be wrong for Cape Town Opera to perform in Israel.”

Back in the 1980s, while studying engineering at Columbia University in New York, I was active in the divestment campaign against South African apartheid. When a fellow student cynically asked me, “Do you really think apartheid will end in your lifetime?”, my answer was, “No, I don’t. I am doing this as a moral obligation to stand with the oppressed anywhere.” But apartheid was abolished in my lifetime, and no one can take the inspiring power of that achievement away from me or from anyone around the world who contributed, no matter how modestly, to that universal struggle.

Rooted in a decades-old tradition of Palestinian popular and civic resistance to Israel’s regime of oppression and deeply inspired by the struggle against apartheid in South Africa and the civil rights movement in the U.S., the Palestinian-led Boycott, Divestment and Sanctions (BDS) movement is today a global network that is proving to be singularly effective in the struggle for comprehensive Palestinian rights.

The BDS Call was launched on July 9, 2005 by an unprecedented alliance of more than 170 Palestinian parties, trade unions, refugee groups and grassroots associations calling on people of conscience and organizations worldwide to “impose broad boycotts and implement divestment initiatives against Israel similar to those applied to South Africa in the apartheid era.”

The global BDS movement, led by the absolute largest coalition in Palestinian society, the BDS National Committee (BNC), calls for an end to Israel’s occupation of Palestinian and other Arab territories occupied since 1967, including dismantling the illegal wall and colonies; an end to Israel’s system of legalized racial discrimination which meets the UN definition of apartheid; and for the inherent and UN-stipulated right of Palestinian refugees to return to their homes of origin.

Anchored in the Universal Declaration of Human Rights, the BDS movement rejects all forms of racism, including anti-Semitism, and calls for equal rights for all humans, irrespective of identity.

Over the last two years, BDS has reached a tipping point. In the last few weeks alone, BDS-related successes included the decision by the influential Presbyterian Church USA to divest from three companies involved in the Israeli occupation—Caterpillar, HP and Motorola Solutions. The Gates Foundation divested its entire stake (more than $180 million) in the world’s largest security company, G4S, after an intense BDS campaign, as did the United Methodist Church. G4S is losing business in Norway, South Africa, the European Parliament, several British universities, and elsewhere, partially as a result of its involvement in Israeli prisons, where Palestinians, including children, are tortured, and in protecting illegal Israeli colonies and military checkpoints in the occupied Palestinian territory (OPT).

In 2013, one of the world’s leading scientists, Stephen Hawking, boycotted a Hebrew University conference, while four U.S. academic associations, including the American Studies Association, adopted the academic boycott of Israel, as did the Teachers’ Union of Ireland.

It is crucial to note that the University of Johannesburg had set a precedent in 2011 by severing links with Ben Gurion University over human rights violations.

In South Africa, support for BDS came from COSATU, the South African Council of Churches, the ANC national conference in 2012 and from grassroots movements. Major trade union bodies in Britain, Ireland, India, Brazil, Norway, Canada, Italy, France, Belgium and Turkey, among others, have endorsed BDS.

Veolia, a corporation complicit in Israel’s occupation, has lost or had to withdraw bids for contracts worth more than $23 billion, mainly in Sweden, the UK, Ireland and the U.S.

European governments have issued guidelines to their citizens and businesses advising them against being involved in relations and projects that normalize Israel’s occupation and illegal settlements, including in East Jerusalem.

Israel’s standing in world public opinion has been eroding for quite some time due to two main factors: the moral power and effectiveness of the global BDS movement, including its crucial anti-colonial Israeli component, and Israel’s political shift to the far right. A 2013 BBC international public opinion poll shows Israel competing with North Korea as the third- or fourth- least popular country in the world.

Israel’s deep ties with “some of the world’s most reviled regimes,” as exposed by Sasha Polakow-Suransky in his book, The Unspoken Alliance: Israel's Secret Relationship with Apartheid South Africa, and particularly its “intimate alliance with apartheid South Africa,” have contributed to its “moral decay and the rise of anti-Israel sentiment abroad.”

A key inspiration for the BDS movement for Palestinian rights comes from Nelson Mandela, who famously said that South African freedom was “incomplete” without Palestinian freedom. South Africa today is called upon, by Palestinians and all peace and justice loving people around the world, to “complete” its freedom by endorsing effective, far-reaching sanctions to hold Israel, its complicit institutions and banks, and international corporations that maintain its regime of occupation and apartheid accountable. This would bring closer our South Africa moment.

But we need your support to get there. We need people of conscience the world over to work with us to isolate Israel’s regime of occupation and apartheid. Resisting war means nothing, as you all know, if it does not entail resisting war mongers and war profiteers. Resisting environmental destruction is futile without standing up to polluters and to policies that enable them to carry on. Resisting injustice, poverty, oppression is reduced to rhetoric or arm-chair intellectualism if divorced from reflection and action on how to address their root causes.

In the same vein, effective solidarity with Palestinian rights today spells BDS. The Palestinian people is appealing for effective international solidarity with our struggle for freedom, justice and equality, which South African jurist John Dugard describes as the world’s current “litmus test for human rights.” We shall overcome.