Youth development and security in Africa

Over 65 percent of Africa’s population is below the age of 35. This makes Africa a youthful continent with huge potential: for an active labor force, immense human energies and reservoirs of creativity for economic, social and political transformation. The potential for young people to transform their communities and their nations could be enormous.

Young people can become forces for positive change if young men and women play constructive and important roles in building peaceful and thriving communities. This will be possible when youth groups take responsibilities as citizens and agents for social change, take an active part in non-violent actions and innovatively invest in community-based initiatives.

However, unemployment and lack of educational opportunities mean that many are living in poverty, are involved in armed conflict, and subject to exclusion. According to Africa Union statistics, over 10 million young Africans enter the labor market each year. So, young people can be instruments and drivers of conflict. Social exclusion and deprivation has often been used as an explanation for the involvement of young people in violent conflict.

Major structural factors that underline youth exclusion and lack of opportunity include: unemployment and lack of livelihood opportunities; insufficient, unequal and inappropriate education and skills; weak political participation; and structural gender inequalities and socialization practices. Legacies of past violence i.e. protracted armed conflict, can lead to vicious cycles in which violence becomes the norm rather than the exception.

Experience shows that when a large number of young people are jobless and have few opportunities for positive engagement, they represent a ready pool of recruits for ethnic, religious, and political extremists seeking to mobilize for violence. In this case, young people become sources of insecurity and instability. Conversely, if youth acquire life-skills combined with leadership know-how, they can direct their efforts to transforming the ugly conditions of violence, inequality, and poverty into peace and inclusive prosperity. They can contribute toward to the security and well being of their communities. 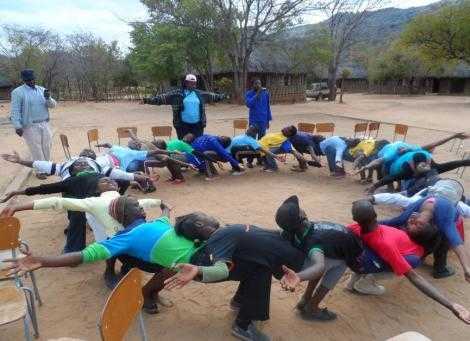 American Friends Service Committee (AFSC) is a Quaker organization committed to peace and social justice. It is focusing to promoting alternatives for youth affected by structural violence, inequality, and injustice. Building youth entrepreneurship, leadership skills and nurturing nonviolent approaches to solving problems are key aspects of youth development. AFSC programs involve youth in the alternative to violence program, and youth have participated in rehabilitation work and in peace events and work. Importantly, working with youth as peace builders has unique advantages, as young people are more open to change, are future-oriented, innovative, courageous and knowledgeable about their peers' realities.

AFSC programs enable young people to go through the ‘Public Achievement cycle’ so they may take up leadership roles in their communities, by undertaking practical work e.g. garbage collections, sports and repairing roads. They also learn how to work together in participatory groups, and learn the culture of tolerance to different viewpoints. AFSC also runs projects to support the creation of employment opportunities and generation of regular income. This is through training on various vocational skills and business management. The trainings also incorporate counseling and mentoring. Some of the trained youth have already opened businesses and are earning a living out of the skills acquired from the project.

Youth voices are vital. When they participate, they can influence policy and decisions that affect their life and educate the public through paintings, poetry, music, dance, drama and sports. AFSC supports the creation of youth platforms where young people can express their voices on peace and reconciliation in society. Young people have fostered dialogue and built relationships between communities.

The role of youth is often depicted in a negative light - either they are helpless victims affected by violent conflict, or they are as criminal gangs or child-soldiers. These portrayals would see young people either as inherently violent, as perpetrators of violence, or vulnerable. These challenges are embedded in local realities of community and nation, but are made manifest through the lives of young people. It is imperative to look at the root causes of threats to security and structural issues, rather than depicting young people as source of insecurity that needs to be mitigated.

So, it will be vital to look at the positive side of young peoples' experience, especially their power and potential as agents of change. It is only when this is recognized that we all are able to cultivate and invest in those potentials. More focus on youth development is the way forward in Africa, by cultivating capacity for innovation, creativity, leadership, and economic well being. Young people will then become engines of Africa’s security, peace and development.