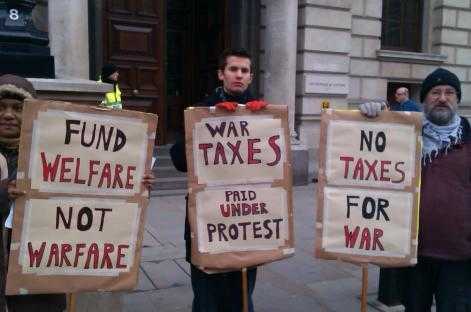 On Thursday 17th January, War Resisters' International, a global network of pacifist organisations based in London, will pay taxes that have been withheld for five years, under protest to HM Revenue and Customs.

Since 2007, War Resisters' International has been withholding a proportion of PAYE as a form of protest against Britain's military policies - the high level of military spending, the cooperation with criminal programmes such as the "rendition" of suspects, spurious rationales for military intervention, and the development and manufacture weapons of mass destruction and drones for long-distance assassination.

"At a time of crisis", said WRI chairperson Howard Clark, "most people detest tax evasion and want to defend public spending to meet social needs. We too. We have not evaded taxes, but openly withhold them as a public protest against government lies and disregard for international norms in its participation in military intervention."

As pacifists, WRI believe that war is a crime against humanity, and are determined not to support any kind of war. Every year, around 10% of the UK's tax goes to fund war and preparations for war. "As an organisation employing pacifists and working for the right to conscientious objection to militarism, the WRI Executive Committee has tried to grant our employees the option to object to war taxes," explained Howard Clark.

WRI have been threatened with legal action various times, and on Saturday 19th January, bailiffs contracted by HMRC will enter WRI's offices and confiscate computers, printers and other equipment that will make it impossible to continue working. Therefore on Thursday 17th January, WRI will pay this debt under protest, in person and in cash, at the Headquarters of HM Revenue and Customs in Parliament Street.