Views and updates on the situation in Syria 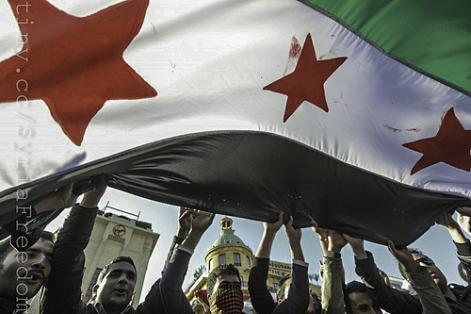 Pulling together views and updates on the situation in Syria from a variety of WRI-linked commentators:

Syria: Nonviolence is Still an Option

While the civil war in Syria brings news of horror to the worldwide community every day, Syrian activists who strongly believe in the principle of nonviolence struggle to find a stronger ground and a louder voice in the conflict resolution process. Activists from inside the country want to raise awareness to the fact that indeed, even in the midst of the horrors of war, a nonviolent path is an option that exists and that is in strong need of supporters.

Conference of the Democratic and Pacifist Syrian Opposition

A few dozens of political leaders and prominent figures of the ‘other Syrian opposition’ gathered in Geneva to plead for a non-violent transition to a democratic and secular Syria. According to the organizers it is the first international conference of the Syrian popular and peaceful civil movement that aspires “freedom and justice, dignity and equality for the Syrian people, without discrimination on the basis of ethnicity, religion and ideology”. Fine principles, but in the meantime the peaceful revolution in Syria was silenced both by the authoritarian regime and the counter-revolution of the reactionary forces. On the conference the dissatisfaction with the dominance of the Western media view on the Syrian conflict is very obvious. The Gulf monarchies and the West only have eyes for the armed resistance and give a platform to those who want to militarize the conflict even further. The speakers of the Geneva conference are members of a non-violent resistance against the Syrian dictatorship. All of them have an impressive past of political opposition.

The first day of the conference (28th of January) started with an introduction by human rights activist and spokesperson of the National Coordination Committee for Democratic Change (NCCDC), Haytham Manna. He immediately drew attention to the empty chairs in the venue. These should have been filled by about sixty Syrians who were denied visa by the Swiss authorities. A few of these absentees were able to intervene online through Skype. Apparently it was France that put pressure on the Swiss government to make sure the Syrian opposition leaders that are still residing in Syria, wouldn’t be able to get to Geneva. Not long after the Conference of the NCCDC was announced, Paris launched a counter-initiative on the 28th of January: an international meeting with the National Coalition for Syrian Revolutionary and Opposition Forces (commonly named the Syrian National Coalition), which was reaffirmed by the French authorities as “the sole legitimate representative of the Syrian people”. This meeting got all the mainstream media attention. The Syrian National Coalition was established in November 2012 and its main goal is to overthrow the regime of Bashar al-Assad. Within the Syrian National Coalition, the Free Syrian Army, the main armed opposition structure in Syria, is the dominant force. It is this armed opposition that gets all the money, the support and the media attention of the Gulf monarchies and the West. The longstanding democratic and non-violent opposition -that assembled in Geneva- is completely ignored, unjustified because their propositions and solutions are much more durable.

Read the full article from Vrede

The worsening violence and repression in Syria has left many analysts and policymakers in the United States and other western countries scrambling to think of ways our governments could help end the bloodshed and support those seeking to dislodge the Assad regime. The desperate desire to "do something" has led a growing number of people to advocate for increased military aid to armed insurgents or even direct military intervention, as the French government has said it will consider doing unilaterally.

While understandable, to support the armed opposition would likely exacerbate the Syrian people's suffering and appear to validate the tragic miscalculation by parts of the Syrian opposition to supplant their bold and impressive nonviolent civil insurrection with an armed insurgency.

The Assad regime proved itself to be utterly ruthless in its suppression of the nonviolent pro-democracy struggle in 2011. However, it is important to stress that this ruthlessness was not the primary reason the movement failed to generate sufficient momentum to oust Bashar al-Assad.

From apartheid South Africa to Suharto's Indonesia to Pinochet's Chile, extremely repressive regimes have been brought down through largely nonviolent civil insurrections. In some cases, as with Marcos in the Philippines, Honnecker in East Germany, and Ben Ali in Tunisia, dictators have ordered their troops to fire into crowds of many thousands of people, only to have their soldiers refuse. In some other countries, such as Iran under the Shah and Mali under General Toure, many hundreds of nonviolent protesters were gunned down, but rather than cower the opposition into submission, they returned in even larger numbers and eventually forced these dictators to step down.

Historically, when a nonviolent movement shifts to violence, it is a result of frustration, anger, or the feeling of hopelessness. Rarely is it done as a clear strategic choice. Indeed, if the opposition movement were organizing its resistance in a strategic way, with a logical sequencing of tactics and a familiarity with the history and dynamics of popular unarmed civil insurrection, they would recognize that it is usually a devastating mistake to shift to violence. Rather than hasten the downfall of the dictator, successful armed revolutions have historically taken more than eight years to defeat a regime, while unarmed civil insurrections have averaged around two years before victory. Unfortunately, the fragmentation of Syrian civil society combined with the hardness of the security apparatus has made it challenging to maintain a resilient movement. Whether a movement is violent or nonviolent, improvisation is not enough when dealing with a regime that readily instills fears as in Syria.

Indeed, the failure of the opposition movement to overthrow the regime in its initial months, when it was primarily nonviolent, does not prove that nonviolence "doesn't work" any more than the failure of a violent movement to overthrow a regime subsequently proves that violence "doesn't work." Whether or not a movement is primarily violent or nonviolent, what is important is whether it employs strategies and tactics that can maximize its chances of success.

Read the full article here from Truth Out.

Destroying Syria to save it?

Daily reports of carnage in Syria make the early months of nonviolent popular uprising there seem like distant dreams of another land. Yet the broad-based Syrian movement began determined to follow a strategy of nonviolent resistance.

Haytham Manna is external spokesperson for the Syrian National Coordination Body for Democratic Change (NCC), itself a coalition of some 15 Syrian leftist political groups. In the second week of then-peaceful protests, back in March 2011, he launched ‘the three no’s’: no to violence, sectarianism and external intervention. These principles were adopted by the movement for many months until the regime’s extreme violence eventually drove many men, desperate to defend their families and communities, to take up arms.

But Syrian voices continue to insist on nonviolence and eventual negotiations as the only way to develop a democratic future. Speaking at the London School of Economics in October 2012, Haytham Manna explained: ‘Militarisation means political and financial dependence on the military opposition, the marginalisation of democratic forces, and the reinforcement of sectarian extremist groups...