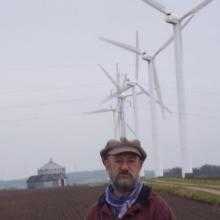 Today WRI bids farewell to Martyn Lowe, the longsuffering Cockney cherub who has been a reliable help week in week out for nearly 28 years. Martyn, proud of his Cockney (East London) heritage, is leaving London for Liverpool ... but he has agreed to come down and help once or twice a year.

Longsuffering? Indeed he has been. Martyn has suffered indignities to which no other volunteer or staff member has been exposed. Perhaps the worst of all came one afternoon in - was it 1987? - when the major part of the WRI filing system came away from the wall landing on top of him. A whole wall full of heavy ringbinder files. Veronica Kelly and I were downstairs, leaving Martyn in peace and quiet to get on with some filing, when we heard a crash and a muffled cry for help from Martyn. We hurried upstairs, but the door was blocked with fallen archives. Finally, we managed to get inside and there on the floor sat Martyn, looking very shaken and surrounded by ringbinder files.

Still, Martyn is nothing if not resilient, and he kept coming back, and gradually took on more responsibilities. For most of this time, Martyn was working as a librarian in the public library services (as well as being a committed organiser in Librarians for Social Change). He'd take one day a week off his paid work - usually a Wednesday - to come and work in our office. For generations of staff, he has been at our side through the gamut of stresses that come up in this work, and ready to provide a sympathetic ear to our complaints about those we're supposed to rely on.

One major responsibility he enjoyed was liaising with the holders of the WRI archives in the International Institute for Social History in Amsterdam. As well as preparing files to be sent off, boxing them up (and labelling them in his - fortunately - unimitable handwriting), he has frequently visited Amsterdam.

Martyn often comments on his peculiar sense of humour and he will enjoy me referring to the KEY role he has at times played in the WRI office - I mean KEYing in data (geddit?) when we adopted a new database system in 1990, and taking on this as a permanent task a few years ago.

From filing, folding appeal forms and stuffing envelopes to checking up on health and safety precautions in the building, Martyn has been helpful in a myriad ways. This work itself has been important. But more important still is the spirit in which Martyn has set about it. This will embarrass him, but let it be known that he is a really kind, helpful and generous person - as many WRI supporters from other countries can confirm because he has taken the trouble to show them round his beloved Cockneyland and make sure that they had somewhere to go when the rest of the city seemed to be on holiday.

Martyn has a political life beyond WRI. He and I have known each other since 1970. We were together in the beginning of London Greenpeace (before the formation of Greenpeace Imperial as Martyn loves to call it). I think he might have coined the word "nukiller". He brought the first MuckDonalds leaflet to the WRI office (later the basis of the MacLibel trial). And more recently he has been one of the activists responsible for exposing the operations of long-term police agents who infiltated London groups, including London Greenpeace. One of Martyn's reasons for choosing Liverpool is the city's closeness to certain vital installations in the nuclear fuel chain.

Martyn is also someone with a keen curiosity that makes him research small snippets of information - whether it's about the underground press in countries under occupation or the changing norms on 'maritime security'. Nowadays he's more likely to send me internet links, but for several years I would often receive newspaper cuttings from him, annotated with his ... handwriting.

Yet today I want to mark Martyn's contribution to WRI. It's been great to have a volunteer providing this kind of continuity for our office, and above all having someone who knows that caring for each other is central to nonviolent politics. Martyn is also someone who thinks ahead. A few years ago he took early retirement as a librarian and invested the pension fund he had accumulated into wind energy - and this he has bequeathed to WRI. [Don't worry - if the firms concerned ever team up with military aerospace, he's got that covered.]

'Now don't go over the top, my boy', says Martyn in his best imitation of an upper class military accent. And I won't carry on. But Martyn, for WRI you have been a gift that has kept on giving in so many different ways. Voluntary work is the cement that binds an organisation like WRI - and you, Martyn, have given us a sackful!

Thank you for it all.

PS. I was asked to write this as Chairperson but know that I speak for all the WRI and PN staff you've worked with -
Veron, Will, Myrtle, Pajo, Oili, Chris, Ken, Pinko, Domi, Tim, Steve, Roberta, Ippy, Lucia, Andreas, Lynne, Javier, Yvonne, Hannah, and Owen - as well as interns and the Exec members who have known the office best, and not to mention PN Trustees, especially Albert and another atheist who recently called you 'a saint' - Ian.