Sicily Against War: Resisting the Niscemi US Military Base 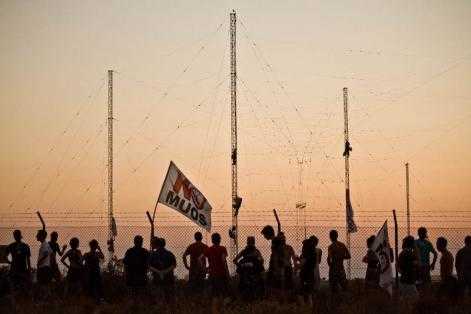 On 9 August, an estimated 5,000 people marched to protest against a new United States satellite communications base under construction in Niscemi, Sicily. At the conclusion of the march, a lot of them invaded the base to free eleven peace activists who had climbed antennas inside the day before. This was the latest popular initiative against the US Navy’s project to deploy in Sicily one of the four ground stations for their Mobile User Objective System (MUOS).

The Niscemi US military base (NRTF) is located in a nature reserve (a site of communitarian interest – sic- from 2000) called Sughereta, a natural cork oak forest. In order to protect this natural oasis and the surrounding population’s right to a healthy environment, and in order to denounce the increasing militarisation of Sicilian land by the US Army, thousands of people have been protesting for two years against the MUOS project. Sicilian civil society does not want the MUOS and doesn’t want the use of their land for military purposes. The "No-Muos" group, including women who are fiercely opposed to the plan to build the new military system, blocked the road leading to the military base and cut off soldiers and construction workers' access to the site. In the face of this, protesters have been brutalised by the Italian police on several occasions and, under the pressure of the US command and of the US government, the Italian government is insisting on supporting the project. The project was authorised, without any sufficient documentation, in 2005 during Silvio Berlusconi’s government, but was supported by the later premiers (Prodi, Monti, Letta).

The multibillion-dollar MUOS system is a next-generation narrowband military satellite communication programme, designed to significantly improve ground communication for US forces on the move and to facilitate the employment of “mobile user” warfighters (especially drones) worldwide. MUOS will provide simultaneous voice, video and data capability by leveraging 3G mobile communications technology. It’ll provide 10 times greater communications capacity than the legacy system. The MUOS spacecraft is the first in a satellite communications system that will replace the Ultra High Frequency Follow-On system.

The system consists of five geostationary earth orbit satellites—one an on-orbit spare—and a terrestrial network connecting the ground stations around the world (NRTF Niscemi and the three other US military bases in Virginia, Australia, and Hawaii). The station in Niscemi will be equipped with three parabolic 18.4-metre diameter antennas which transmit in the microwave range, and two 149-metre high helical antennas in the UHF spectrum.

According to a study conducted by physicists Massimo Zucchetti and Massimo Coraddu of the Polytechnic University of Turin, the electromagnetic waves emanating from MUOS will spread out over 135 kilometres, with serious risk of causing severe degenerative diseases such as leukemia and cancer in the surrounding population. The area, moreover, is already polluted since 1991 by the 41 antennas already housed by the NRTF facility. Finally, the main beam of microwaves emitted by the MUOS antennas would significantly increase the risk of accidental irradiation of aircraft and could cause accidents tens of kilometres away. All these risks have been openly recognised in a decision by the Sicilian Administrative Court, which ratified a provisional halt to the project. The new regional government led by Rosario Crocetta (member of the Democratic party and former communist leader) initially supported the struggle of No Muos Movement and blocked the authorisations to the work inside the ecological reserve. At the end of July Crocetta changed his decision and become a supporter of the project. He also accused the peace movement of being sponsored by the mafia. A lot of activists, members of anti-mafia grassroots organisations, denounced him to the judiciary court.

The truth is that the NO MUOS people denounced, time after time, a company from Niscemi which was to carry out most of the field work inside the base, preparing the platform for the MUOS antennas: this company has no anti-mafia certificate (which in Italy is compulsory, to sign any contract). The same company had been working all along without any intervention by either the civil or military autorities, supposed to fork it out. In February 2012, the Senator Giuseppe Lumia (Pd) – politically near to Sicilian President Crocetta - even presented a point of order in the Italian Parliament about this legality problem: the Government never gave an answer. The Member of Parliament Lumia wrote: “by the DDA (Antimafia District Directory) investigations, Vincenzo Piazza, owner of the company, was linked to the well-known boss of the Giugno-Arcerito clan, Giancarlo Giugno”.

The regular presence that the No MUOS activists continue to maintain in the small town of Niscemi (30,000 inhabitants) is the only way to try to stop the works. Thanks to all the citizens who have answered the call, we are continuing the protest of the base US-Navy-8, but the repressive action against people that simply want to regain their sovereignty is strong. On 6 March the NO MUOS mothers were at the base: some of them have been dragged forcibly by the police in order to allow some Americans soldiers to cross. Unfortunately, one of the mothers has even been hospitalised. It was a similar scene to the one that happened on 11 January, when some activists blocking the access to the base were attacked and injured by almost 100 policemen. On 22 April, 4 activists, two young men and two young women, cut the fence of the US base and they climbed on the giant antennas that were in operation. Police, military and firefighters went there to persuade them to get down. Two of them were arrested and accused of aggravated damage, resisting a public officer, and being disruptively present on a military site.

One month ago, twenty US intellectuals, professors and researchers (Noam Chomsky, Linda Alcoff, Dick Walker, Chris Hedges, etc) signed a public appeal to ask the Obama administration to immediately stop the installation of the MUOS station in Niscemi. They also firmly condemned the brutalisation of the protesters and expressed their solidarity with Sicilian civil society protesting against the MUOS.