Prostitution, Patriarchy and Power in the Military

Embrace Dignity is a South African human rights organization advocating for legal and social reform. We campaign for reforms recognising prostitution as violence and aim to reduce demand for commercial sex. Recognising the harms of prostitution, we offer support to women seeking exit through a self-led system. We look forward to welcoming and collaborating with international and local nonviolent activists embodying the conference’s theme: “small actions can contribute to building big movements for change”. 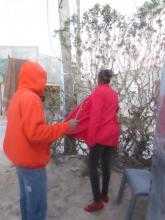 In our country, it is more likely that a girl will be raped than go to secondary school. If girls do manage to attend school, it is unlikely they will find a job. Violence against women stops them getting an education, limits economic activity, and undermines their ability to choose the timing and number of children they have. It is also damaging to their physical, social, emotional and psychological wellbeing – for many, it is a direct cause of death or disability. It also has huge economic costs, including costs to health and policing. Every year, thousands of rural South African women migrate to urban centres in the hope of economic opportunity, often joining the ranks of the unemployed. Domestic and gender based violence worsen the situation, and under these conditions, prostitution flourishes.

Prostitution is a deeply rooted form of sexual exploitation that feeds off poverty, inequality and entrenched social constructs. The sex industry is unequivocally dangerous. Different degrees of abuse, coercion and violence are experienced but all prostituted people are physically and psychologically harmed in the process. Prostituted women’s level of post- traumatic stress disorder (PTSD) has been proven to be equivalent to that of combat veterans. Once in the sex industry, women often resort to alcohol and drug abuse to endure daily mental distress, resulting in dissociation from oneself and the rest of the world.

Prostitution also has negative impacts on the rest of society. If some women can be bought and sold it gives the message that all women are potentially for sale, a concept which permeates social sensibilities. South Africa is a deeply patriarchal society, in which masculinity often entails conquering or controlling women. The perception that masculinity and violence are intimately entwined is still dominant. Young boys fear that demonstrating sensitivity or gentleness will emasculate them and make them appear weak.

War feeds into the image of masculinity as unemotional, dominant and hyper-violent. In fact, the militarisation of societies and war play an enormous role in fuelling prostitution. A breakdown of social structures, economic crisis, and an influx of occupying soldiers (and even peacekeeping forces) result in a drastic increase in demand for prostitution – a burden often carried by women from poorer nations. Some argue that the act of war creates individual feelings of powerlessness, which must be regained through the domination of vulnerable women.

This is not new information. During World War II the Japanese Empire forced thousands of “comfort women” from Japanese-occupied territories into a prostitution corps to serve soldiers. The United States armed forces have a particularly damning history of misuse of the women of occupied countries, as well as the practise of “R & R” (rest and recuperation). Prostitution sites around military were encouraged by military leadership, with condoms and security escorts often being provided.

In the past, arguments have been made to explain the blind eyes and enabling hands of governments and military leadership – rampant sexual activity would occur anyway so it might as well result in some financial “reward” for the bought individual rather than manifesting as rape. This creates a fallacious distinction between rape and prostitution, when in fact the two are intimately linked and complementary. Both acts conform to the concept of a right to pleasure, encouraged by military leadership and hegemonic masculinity. Government-sanctioned prostitution has also been rationalised as useful for creating a necessary sense of brotherhood and camaraderie between soldiers – what about the women’s rights to equality, happiness, and human dignity? This is also an injustice to men, portrayed as incapable of controlling their rampant sexual urges.

One of the results of organised military prostitution for soldiers’ “rest and recuperation” is the creation of a “prostitution economy”. Even after the military moves away, sex trade entrepreneurs maintain the industry through sex tourism. This has an economic and generational legacy in which it becomes a dominant option for employment for impoverished women. Children (destined to be fatherless) are also born, bearing the stigma of illegitimacy and often entering the trade later in life. The recurring occupation of parts of South East Asia by United States forces is perhaps where this is most evident.

While South Africa has a considerable influx of international trafficking victims, Embrace Dignity has also realised the significance of “domestic” trafficking. According to the Palermo Protocol to Prevent, Suppress and Punish Trafficking in Persons, especially Women and Children, an internationally ratified UN declaration, trafficking is defined as “the recruitment, transportation, transfer, harbouring or receipt of persons, by means of the threat or use of force or other forms of coercion, of abduction, of fraud, of deception, of the abuse of power or of a position of vulnerability or of the giving or receiving of payments or benefits to achieve the consent of a person having control over another person, for the purpose of exploitation”. If a rural woman travels to a big city with the promise of work as a cleaner but arrives to find that she is expected to earn money through prostitution (even if she is not physically forced to do so), she can be identified as a trafficking victim. She has been transferred by fraud or deception, most likely because of the abuse of her position of vulnerability.

South Africa is not at war but one in three men has raped a woman and violence is considered one of four primary factors detracting from health. Enforcing the patriarchy, industries like mining, trucking and the military occupy a significant portion of the country’s male workforce. Our historical and continued migrant labour system leaves many women responsible for families while their partners are away. Family pressure, poverty, violence and a lack of other options often result in vulnerability to trafficking.

Embrace Dignity advocates for a legal model known as partial decriminalisation. This decriminalises the bought person in order to allow access to vital services, decrease stigma, and increase the chance of pursuing an alternate form of income. This necessitates a social welfare dimension, with government support provided for exit. On the other hand, the buyer, third party trader (pimps and traffickers) and the sex industry remain criminalised. This approach recognises that the supply of prostituted people only exists because there is a demand for commercial sex. It also acknowledges the inherent harms and gender inequalities in prostitution and seeks to attribute punishment appropriately onto the exploiter.

WRI can be a part of a nonviolent campaign toward the dismantling of patriarchal relations and the transformation of gender relations, so that men and women are truly equal and can enter into mutually fulfilling relationships, free of exploitation. This would enrich peace-keeping efforts too, bringing usually absent women's voices into the discussion and contributing to a decrease in sexual violence.