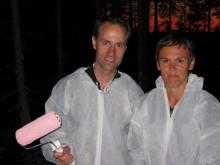 Swedish peace campaigner Martin Smedjeback today received a prison sentence of 14 days from a provincial court in the Scandinavian country. On July 29, 2011, together with Annika Spalde, he went inside the air force base F21 in Luleå in the northern part of Sweden. Inside they painted the air strip pink. Spalde who had already before received and served a sentence of 14 days in prison for an earlier action the same week, did not get any further sentence.

— A prison sentence is a small burden compared to the suffering of those exposed to the wars prepared for here. Sweden is an accomplice to wars by offering military exercise areas for foreign armies and through our arms exports, says Martin Smedjeback, 39, from Mjölby, Sweden.

Annika Spalde and Martin Smedjeback have dedicated their lives to resisting what they call the machines of militarism and animal oppression in modern society. Based in the nonviolent resistance community "Gandhi" in the town of Mjölby, they have been imprisoned several times before for standing up to arms exports and war. At present Spalde is in Iraqi Kurdistan, working with Christian Peacemaker Teams to support local human rights activists.

The peace action that Spalde and Smedjeback were convicted for was a part of War Starts Here, an international peace camp which took place in Luleå from July 22 to 29, 2011. More than 200 people from 21 countries took part in the peace camp. The main aim was to highlight the vast military complex called the North European Aerospace Test range (NEAT). Its area in the north of Sweden is almost the size of Belgium. The facility is used for testing missiles, combat aircraft and unmanned aerial vehicles (drones). Among the weapons tested at the range are drones such as those used in extra-judicial executions in Pakistan and elsewhere.

All video and pictures from Ofog can be used freely. Please mention Ofog
as the source, and Karlberg where noted.